You are at:Home»Current in Zionsville»Jeweler provides art space for young people

If you’re driving around Zionsville, you might want to make a stop on First Street behind Robert Goodman Jewelers. Since 2005, the back of this store has become a rotating gallery for local artists who dare to paint something big. This summer, 19-year-old Becca Hallstedt of Zionsville is taking that challenge.

“There’s something really enticing and cool about creating something that’s so huge,” Hallstedt said.

Although the mural space has been in existence for several years, owner Bob Goodman said it’s only been since 2010 that he’s opened it up to young artists in the Zionsville community.

“We’re glad to be able to provide a space and an opportunity for creativity,” he said.

In fact, Hallstedt’s been waiting a year to get her paint brush on the wall.

“When I first asked if I could paint the wall, back in 2012, it had already been spoken for,” Hallstedt said. So, she put herself on the waiting list and asked Goodman whether he could help her secure another large space. “Bob Goodman is just awesome. His support of young, local artists is just amazing.”

With Goodman’s help, Hallstedt and friend, Eamon Breen, also of Zionsville, created a mural of a lion’s face that remains on the Lion’s Park Bridge. 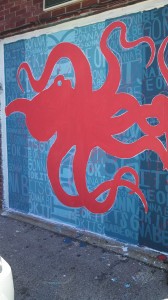 Since June, Hallstedt has turned her talents to the Goodman Jewelers wall, creating a large, colorful octopus.

“I had the idea and just went with it,” she said.

After making sketches in chalk, Hallstedt then paints everything by hand, creating the background as she goes.

“Painting on a space this size can be hard at first because it’s very exposed and raw, but then, you just let loose and it’s this amazing experience,” Hallstedt said.

Hallstedt hopes to finish the mural by mid-August before she returns to the University of Cincinnati for her sophomore year.

“I hope it’ll be a great addition to that street,” she said.

Goodman said he can’t wait to see the finished product and would love to help find more spaces like his for young artists to use.

“We don’t dictate content. We just let them create,” he said. Goodman also said how much he enjoys helping up-and-coming artists and credits a great community and school system for fostering their talents.

As a young person, Hallstedt admits it can be pretty intimidating to ask a business whether you can paint on their walls but said you just have to step out of your comfort zone and go for it.

Once the octopus mural is done, it’ll stay up for a year and then be painted over. That way it’s ready for another young artist’s big idea.