You are at:Home»Current in Zionsville»Daly hoping for 2014 Indy 500 run 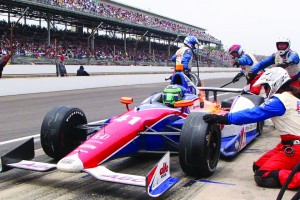 Conor Daly was upbeat after his first Indianapolis 500 although it was riddled with mechanical problems. He started in the 31st position and finished 22nd despite losing his rear brakes and suffering through two small fires during refueling.

After the Indianapolis 500, Current was able to catch up with Zionsville resident rookie driver, Conor Daly.

How was your rookie run at the Indy 500? It was an incredible experience – a dream come true. It wasn’t the smoothest race or month in general, but I made it through, and it was all great in the end.

Were you disappointed in your finish? People have no idea how difficult it is to just finish a race, so it’s one of those things where you are just happy you made it to the end. I could have had a stronger race, but we had a lot of problems in the pits and as soon as you get behind there you are in a bad position for the race. I would have liked to have finished higher – I know we could have – but I learned a lot.

How surreal was it to be in the starting lineup among drivers like Tony Kanaan and Helio Castroneves? It was amazing – just a very cool experience for me and so hard to describe. I had this amazing feeling inside and my heart was pounding. It was just satisfying to know I had made it to that point – I was just very happy.

When did it hit you that were actually part of the Greatest Spectacle in Racing – the Indy 500:  – It’s tough to say. When I qualified it was a very satisfying experience – I knew I would be in the race and that it was all about to start. But, the start of the race and the opening ceremonies – those were major moments for me – I thought, ‘Wow, here we go.’ I didn’t want it to end.

What is the biggest lesson for you from your rookie run at the Indy 500? I think patience – you have to be very patient during the race and watch – which I did. Not necessarily being conservative but being careful because you want to make it to the end of the race, and that is what I was able to do, and I am proud of myself.

Who is the first person you talked to after the race? – My team guys – I am really close to them and really enjoyed working with them – so it was nice to bond with them a little bit after the race.

Will you be back next year? I certainly hope so – it would be a very cool thing to do, but I will have to see what happens, I am just excited to get the first one under my belt and hopefully be ready for another one in the future.

What’s next? I had two test days in Hungary the week after the race and then getting ready for my next race the middle of this month in Valencia.