You are at:Home»Current in Zionsville»Wadi Qelt offers inspiration 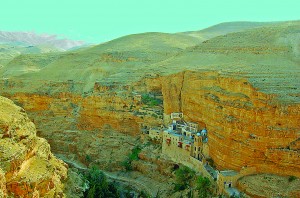 Wadi Qelt (or Kelt) is a narrow gorge cutting through the Judean Wilderness, a rugged mountainous area in the West Bank east of Jerusalem.  A blue-domed monastery improbably clinging to its steep northern face marks Wadi Qelt as a special place, not only the setting for one of Jesus’ best known parables but also the likely inspiration for the Bible’s best loved Psalm.

For thousands of years, travelers between Jerusalem and Jericho have followed the 17 mile long path through Wadi Qelt, facing danger from falling, wild animals, and thieves hiding in its many caves.  By the time of Jesus, the Romans had built a road through Wadi Qelt that became the setting for the only parable of Jesus tied to a specific geographic location.  The traveler rescued by the Good Samaritan had been beaten by thieves and left to die by passing countrymen along this dangerous road to Jericho,  a road so well engineered that it is still used by tourists today.

Shepherds can still be seen above Wadi Qelt, leading their sheep and goats along paths worn into the hillside by countless earlier shepherds.  The shepherds still guide their flocks along these paths with their rods and still lead them to the calm, spring-fed waters of the Wilderness.  When sitting above Wadi Qelt, it is impossible not to imagine that the writer of 23rd Psalm was sitting in the same spot when he wrote about his Lord, the shepherd, protecting and comforting his animals as they walked through the “valley of the shadow of death.”  Whether this really happened will never be known, but it is easy to see the comforting words of that famous Psalm as an effort by their writer, traditionally thought to have been David, to connect his image of God with the real experiences of his people.

The monastery of St. George that hangs on the wall of Wadi Qelt above the road to Jericho was first built in the late fifth century and restored to its current condition in 1901 by a Greek monk who settled there.  It is inhabited today by Orthodox monks who gladly open their house to visitors and show them the revered bones of monks killed in 614 when the Persians destroyed the original structure.

A trip to Israel includes many opportunities for connecting the events in the Bible with the locations where they happened.  But few travel experiences compare with sitting above Wadi Qelt and contemplating the hundreds of generations that have experienced both its dangers and the words of hope and compassion it may have inspired.