If the bar isn’t able to offer outdoor venues, it might be forced to leave the Arts & Design District behind 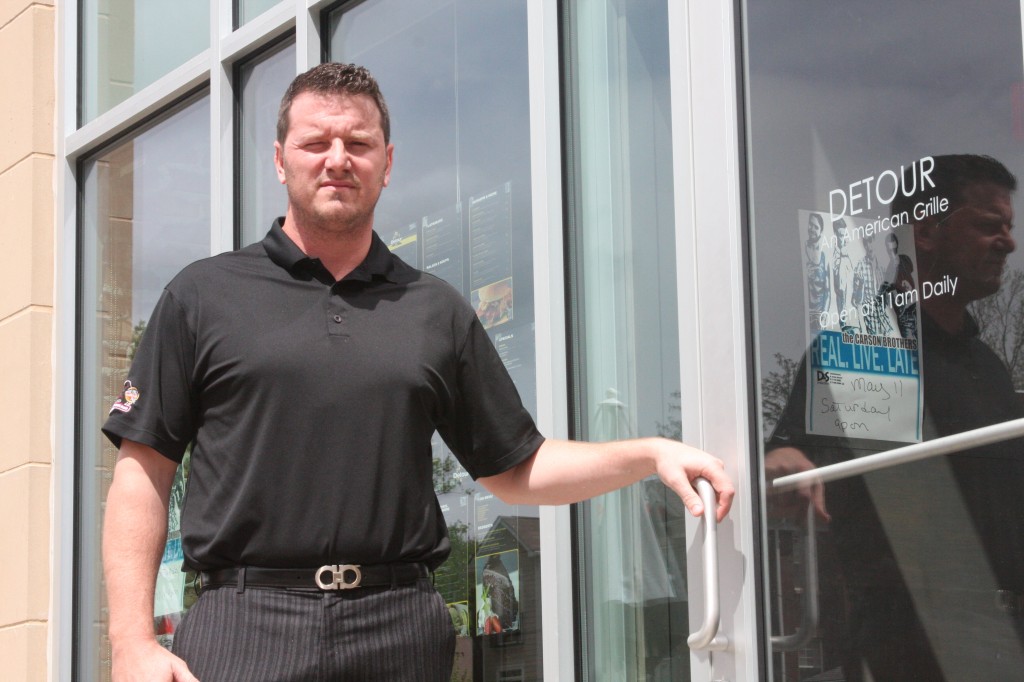 The owners of Detour: An American Grill say they may consider closing the business if Carmel does not allow them to host outdoor events, but Mayor James Brainard is refusing to back down, saying the city “won’t be blackmailed by a business.”

The city denied Detour’s request to close 2nd Avenue for two outdoor events at a recent Board of Public Works meeting, citing numerous noise complaints from 2012.

“We would never have invested so much money (into Detour) if we knew this was going to happen,” said Detour co-owner Jeremiah Hamman, who also owns the Mo’s Steakhouse in Clay Terrace. “We moved here to be next to the Monon and take advantage of the location. We were asked here to help revitalize the Arts & Design District, but now … they don’t want to work with us.”

The loss of the popular bar and eatery would be yet another blow to the Arts & Design District, which continues to have issues attracting businesses, and to nearby Sophia Square, which has an even greater vacancy rate than the rest of the district.

Noise complaints dogged the 2-year-old bar much of last year, resulting in several tickets from the Carmel Police Dept. Three citations are going through the Carmel City Court. A status conference was slated for this week.

Brainard cited those noise complaints as the reason why Detour’s requests for the events – a May 4 Cinco de Mayo party and a May 18 Pole Day Party hosted by IndyCar driver Alex Tagliani and his Bryan Hurta Racing Team – was unanimously denied at the meeting earlier this month. Detour requested that the block of 2nd Avenue adjacent to the bar be closed, allowing more people to attend and, in the case of the latter event, for the racecars to be displayed.

According to Brainard, Carmel police were dispatched to Detour 34 times in 2012, with half of those for noise complaints. Other bars and restaurants in the Arts & Design District received three noise complaints total. In addition, the administration said it’s received numerous calls and e-mails complaining about the venue.

“Given that record, we’re not going to continue the problem,” Brainard said at the meeting.

Detour co-owner Fred Knipscheer and attorney David Barker were at the Public Works meeting, but weren’t asked to speak. They thought they’d reached an understanding with the city beforehand and were taken aback when the board voted against their proposals.

“Brainard refused to even look in our direction,” Knipscheer said. “We had the rug pulled out from under us.”

The problems with the city began at Detour’s first Cinco de Mayo party last year. The owners anticipated a crowd of 500 people; more than 2,000 showed up.

“We didn’t do a good job in a lot of ways that time,” Hamman said.

Detour didn’t have enough security working and the neighboring area was left a mess in the aftermath of the event.

Hamman admits the bar has had some issues, but said they’re trying to do better. Two managers were let go last year after failing to get the noise problem under control. Now, when a band plays in the bar, a manager will walk the Monon Greenway with a decibel meter. To stay in compliance with the noise ordinance, the noise must remain under 90 decibels from 60 feet away.

According to Hamman, the bar has received no noise complaints in 2013, and they hope to keep it that way. He scoffed at accusations Detour will turn the refined Arts & Design District into another Broad Ripple, the Indianapolis neighborhood renowned for it’s younger crowd and cheap bars.

Detour would like to have about a half-dozen outdoor events a year, mostly in the warmer months. Hamman claims business is so slow during the winter, they need the crowd-gathering outdoor events – which make about $250,000 for the business – to make a profit for the year.

If they can’t work out an arrangement with the city, Hamman said he might move Detour when its lease is up, taking with it more than 60 jobs and $200,000 in annual taxes.

“We want to be a good neighbor,” Hamman said. “We’ve tried to fix our mistakes. We’re trying to get into the city’s good graces again.”

Brainard said he was not aware of Detour’s decibel meter or of its written plans to curb complaints, but he was hopeful that an agreement could be reached at some point – assuming they’re willing to change their loud tune.

“We want Detour to succeed, but we don’t want them to cause problems for their neighbors,” Brainard said. “If they can change how they’ve operated in the past, we’d be glad to look at any plans they want to submit.”

What do you think? Should Detour be allowed to hold outdoor events that bring visitors to the Arts & Design District or should it remain in time-out until it can learn to be quieter? Tweet your response with the hashtag #CarmelDetour.