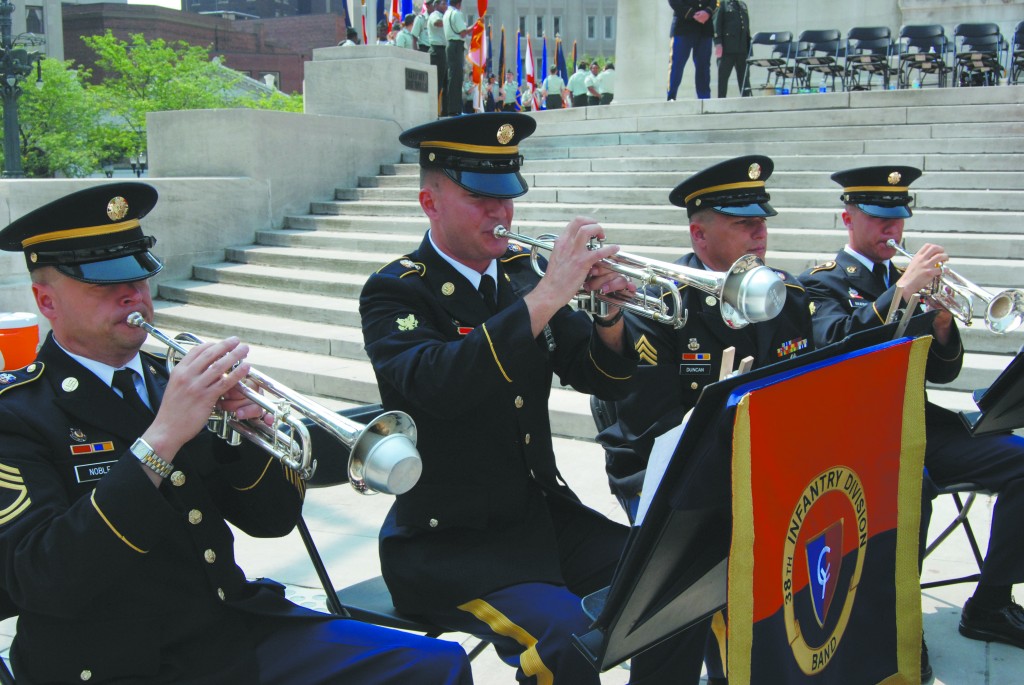 In the mood for some rousing live music this weekend? Take the grandparents, the kids, a blanket and your American pride and head to Conner Prairie Interactive History Park on May 18. The 38th Infantry Division Army Band will take the stage at 4 p.m. for a concert featuring a wide variety of music, from the “Star Spangled Banner” to classic rock.

The 38th Infantry Division Band is the only military band in the state of Indiana and is headquartered in Indianapolis. Of nearly 45 members, six of them are Hamilton County residents, according to Sgt. 1st Class Cynthia Hogwood, who is one of the co-managers of the band.

“Two of our members, Sgts. Rod and Cara Pittenger, who live in Fishers, actually met in the band, got married and just welcomed a baby girl!” Hogwood said. They play trumpet and percussion respectively.

It’s a common misperception that military bands only play patriotic music. While that’s the foundation of the concert band, there are also several subsections of the band that specialize in other music genres so there’s sure to be a style that everyone enjoys, according to Hogwood. Concert goers will also be treated to a jazz combo (offering a tribute to jazz legend Dave Brubeck, who died last year) as well as a rock band called Rapid Fire, a larger jazz band and a Dixieland band.

This will be the first time the 38th Infantry Band will play at Conner Prairie. The concert is perfectly timed as May 18 is Armed Forces Day, and it will follow a Civil War reenactment in the Park in the afternoon.

“We’re hoping we can bring the Confederates and the Yankees together with some music,” Hogwood jokingly said.

This is a diverse group of highly talented musicians who serve in other ways as well.

They are always on duty, even on the days off that others take for granted. Any given Memorial Day, Veterans Day or 4th of July, they can be found marching in the parades. The band will be marching in the Fishers Freedom Festival Parade on June 30, and the jazz band will perform on Aug. 25 at Seminary Park.