You are at:Home»Current in Zionsville»Pinwheel garden to raise child abuse awareness 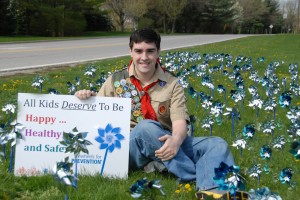 Spinning in the breeze, glistening in the sun, the 87 blue pinwheels planted outside the American Legion in Zionsville represent the 87,000 children born in Indiana in 2012. They also are the national symbol for child abuse prevention, which is observed during April.

“It’s very striking to see that many grouped together like that,” said Katee Franson, development director for The Villages, an organization that works to help children find safe homes. “There is just something about it when all those blue pinwheels are spinning around and glimmering in the sunlight – they are a good reminder of childhood and how much fun and magical and changing it is.”

Franson was approached by her neighbor, 17-year-old JP Ray, who wanted to add to his Eagle Scout project.

“I’m collecting duffel bags for kids who are being abused so they have something to pack their stuff in when they leave instead of having to put their stuff in trash bags,” said Ray, a member of Troop 358. “I learned about the pinwheels and then approached the Legion.”

Ray chose the Legion for the pinwheel garden because of its proximity to two schools.

“Most people pass that way at least once a day,” he said.

Franson was impressed Ray would undertake the project.

“It’s wonderful because here is a young person helping to protect other young people – it just speaks to the whole idea of kids giving back to help other kids,” she said. “He knows not every child has the same good family situation he has, and I was thrilled he wanted to work with us.”

Ray and his family planted the pinwheels the Saturday before Easter. Reaction has been positive.

“My eagle project advisor thought it was really cool because I am not only collecting the bags, but then I did the garden and will also help out at a 5k run,” Ray said. “It’s unique because most projects involve building a structure.”

For Ray, the project has been an important lesson.

“I know what it’s like to have to make a fresh start – not because I was abused – but my family moved her from Michigan my eighth-grade year. I had to leave my friends and everything I knew,” he said. “When we moved, it was a few weeks after school had started, and I had to make all new friends. So, I can relate because those kids can’t take anything really and have to start all over.”

You can help Ray with his Eagle Scout project by donating new or gently used duffel bags at the Legion. Or, you can contact him at jprayeagleproject@gmaill.com.