You are at:Home»Current in Zionsville»ZCHS Facilities operational after lightning strike 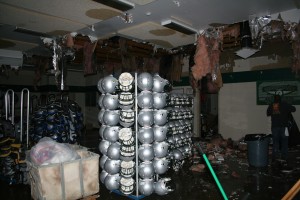 “We’ve located teams from those (Team Building) locker spaces to the inside varsity locker rooms. It’s a viable option to help us get through,” ZCHS Principal Tim East said. “We hope to have the building repaired by the end of the school year and definitely by the fall when school begins. The timeline is broad until the full assessment can be made.”

At 4:00 a.m. last Wednesday, the building, which houses a meeting area and the locker rooms used for football, lacrosse, and track, was stuck by lightening and caught fire.

The building housing the concession stand and restrooms was not affected.

Zionsville Police were first to arrive and saw fire coming through the roof of the building. From the damage, it appears that lightning struck the southwest corner of the roof but, fortunately, did not engulf the building.

“Because of the quick action of the fire departments, the damage was limited,” East said. “It speaks so well to our fire department, assisted by Whitestown and Carmel.”

Firefighters were able to extinguish the fire by 5:20 a.m. No one was inside the building at the time of the fire, and there were no injuries reported. Preliminary damage estimates for the building and contents may reach as high as $200,000, according to fire department officials.

Earlier last Wednesday, at 12:28 in the morning, the Zionsville Fire Dept. was dispatched to a report of a possible house fire caused by a lightening strike at 1132 Huntington Woods Place.

Firefighters arrived to find the homeowners leaving the home. After investigating the home, crews found a fire in the basement and were able to bring it under control within 20 minutes. There were no firefighter or civilian injuries reported.