You are at:Home»Current in Carmel»Carmel Cover Stories»From the page to the stage 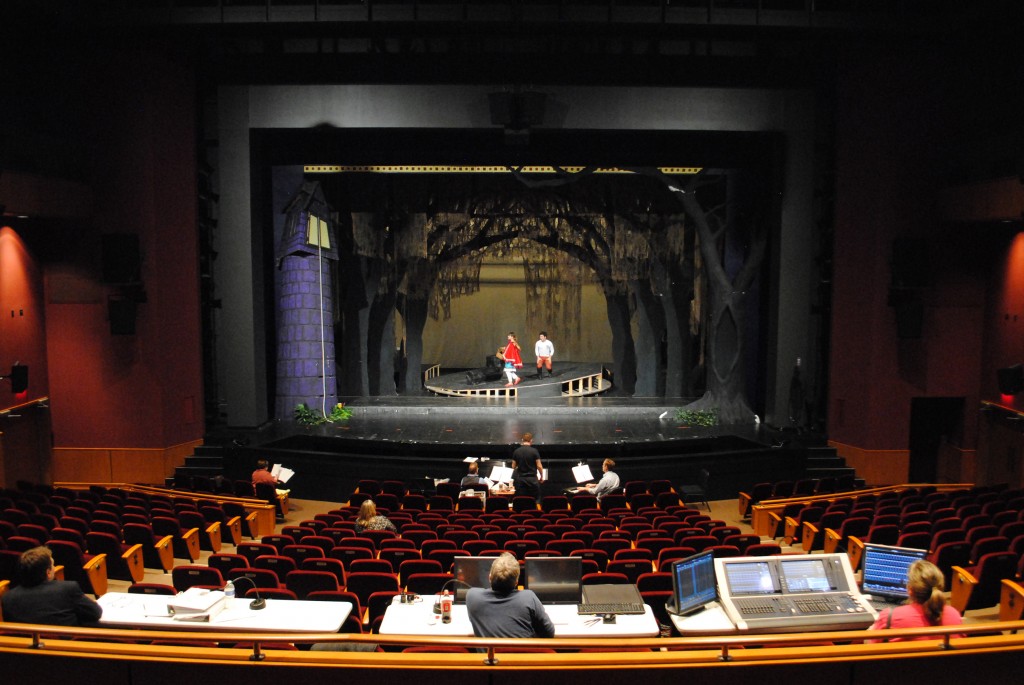 This weekend, the Booth Tarkington Civic Theatre will open “Into the Woods,” its final show of the season. Current went behind the scenes with the show’s director Robert Sobera, technical directory Troy Trinkle and others to find out what goes into taking a show from the page to the stage. 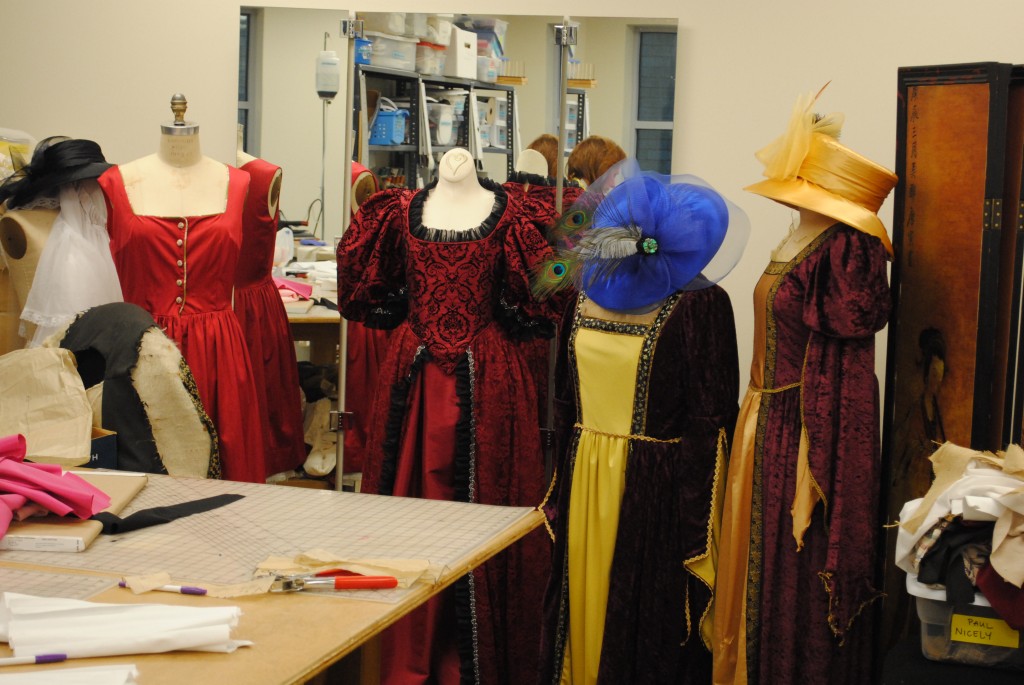 Civic hand crafts all of its costumes in its costume shop located in the Tarkington building.

Civic decides its upcoming season before its current season is completed. This kind of pre-planning is key for a theatre like the Civic, doing five large-scale productions each year.

With opening night this Friday, full scale preparations began for “Into the Woods” the second week of February, a month-long gap after the Civic’s last production, “Fox and the Fairway,” allowing for a bit more prep than the group usually is allowed. Auditions were held in mid-February. After casting is completed, Civic’s costume designers can move forward with creating the show’s costumes, masks, makeup and more.

“This is a huge production,” Trinkle said. “It’s a way to end the season on a high note.”

After the season is finalized, Music Director Brent Marty coordinates orchestras for the entire season, working through an orchestra manager to schedule, budget and hire a talented pit of professional musicians for each of the season’s shows.

“We are one of the full, large companies that will still hire a full pit orchestra, the only one in the area,” Marty said.

While Civic uses volunteers for its cast and crew, Marty finds that a professional orchestra streamlines the preparation process and leads to a noticeably better end product. 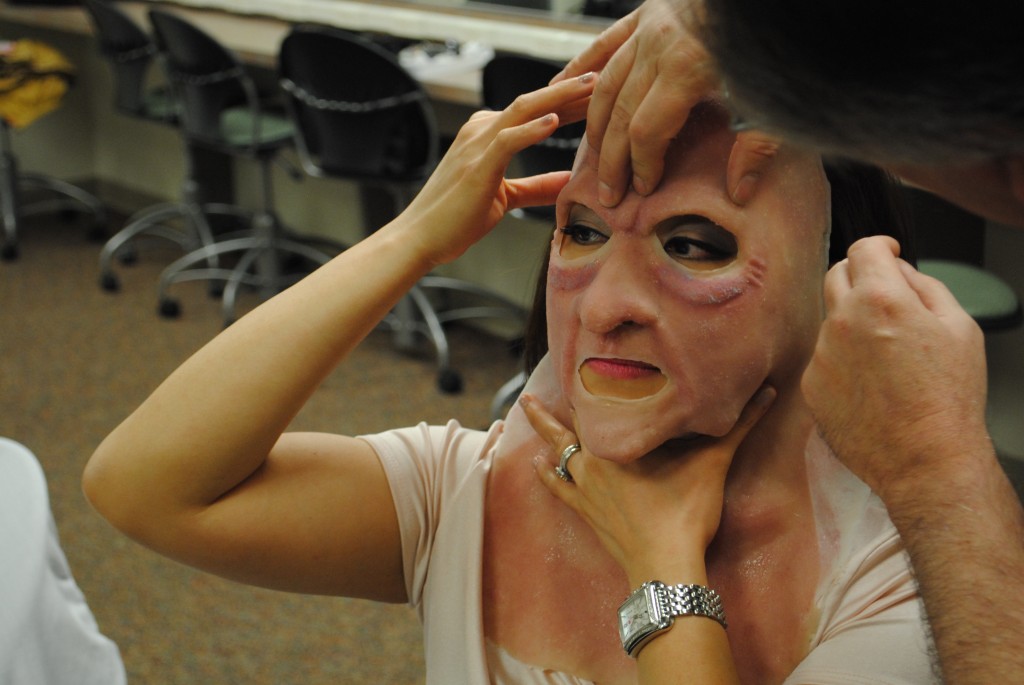 Actress Nathalie Cruz prepares to put on her prosthetic mask for the first time at the beginning of tech week. As the Witch, Cruz will wear a full prosthetic face mask created by David Schlatter (pictured), a grey wig and full costume.

Creating the world of the show

Set design is at the forefront of work to be done in nearly every production. Civic originally performed “Into the Woods” in the mid-90s at its former space in Indianapolis. The set designs by Rob Koharchik, originally used more than 15 years ago, were revamped to fit the Tarkington’s stage.

More than 10 weeks ago, Trinkle and master carpenter Dan Strain started hand crafting the sets. This process involved creating three standing portals of trees to create the show’s woods, the tallest of which is 27 feet. According to Trinkle, more than 100 sheets of material had to be cut just to create the patterns of these archways.

“Everything we build is a prototype,” Sorbera said. As such, tweaks are constantly being made, even on a production using portions of former designs.

A 20-foot turntable was refurbished from Civic’s initial production of “Into The Woods.” Placed at center stage, this revolving piece allows for a wide array of unique character movements and for the creation of a number of different scenes without doing a traditional scene change. Throughout the show, the turntable allows characters to run in place while creating the illusion of movement. According to Sorbera, it is these types of moments that audiences really love.

“As an audience member, you like to be manipulated, to know there’s a design, a control and there’s a formula,” Sorbera said. 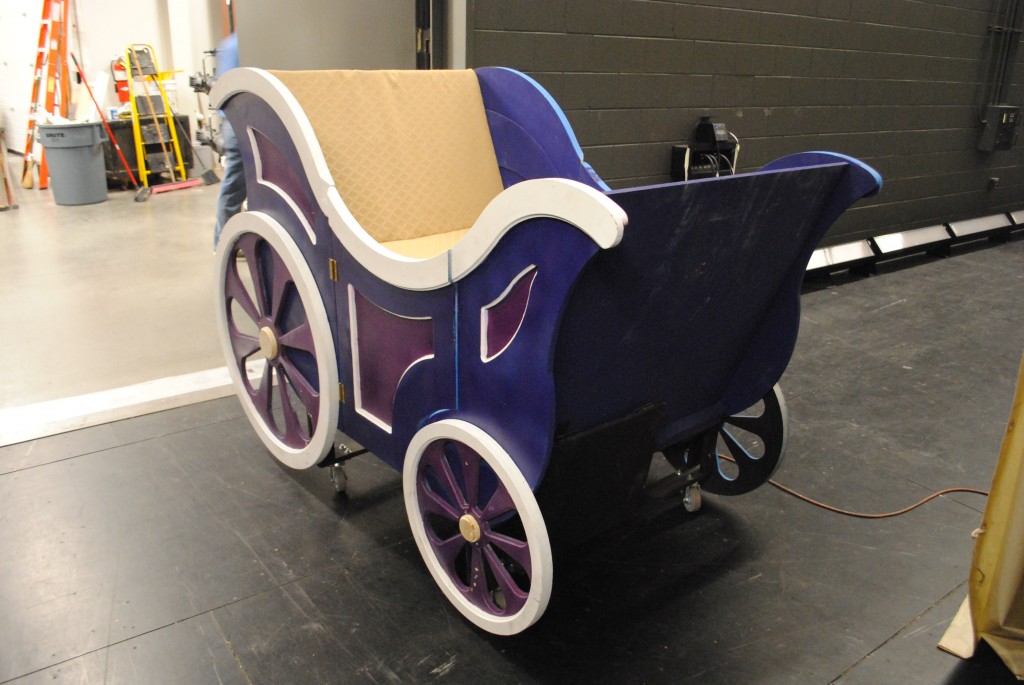 Last week was the beginning of “tech week,” the first week of Civic working on stage at the Tarkington in which the full sets are loaded in, lighting is implemented and sound effects are finalized. Before tech week, the cast practices at a rehearsal space in another area of the building while other companies occupy the stage.

“(During tech week,) it really is amazing how different (the stage) looks from one night to the next,” Sorbera said.

Tech week is when the volunteer crew begins its work, learning specific skills and familiarizing themselves with the ins and outs of the production. 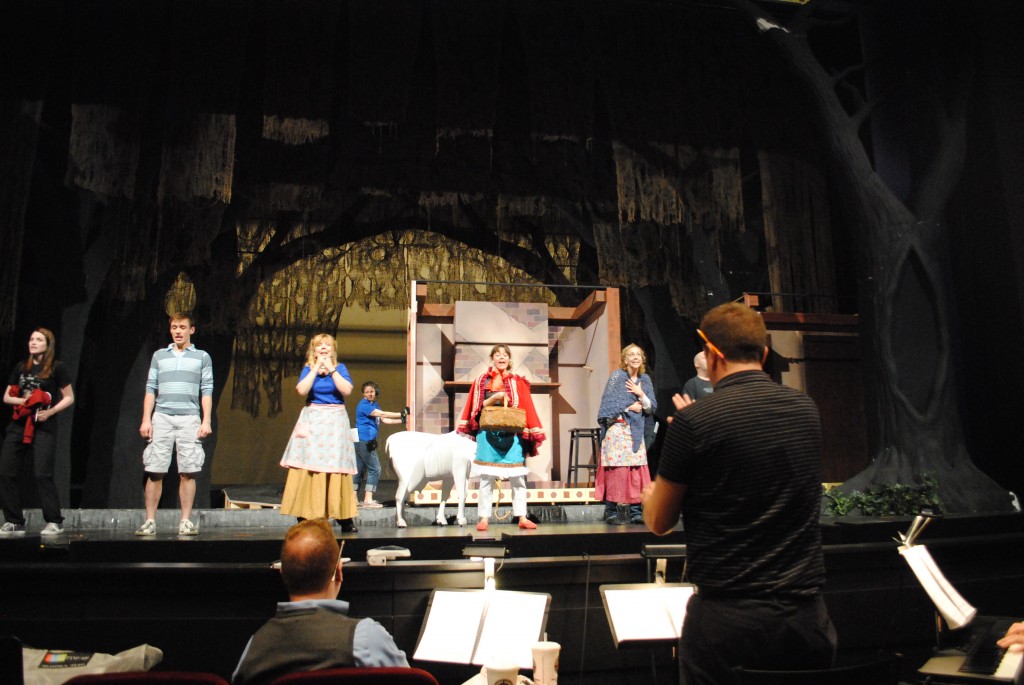 The cast takes part in the show’s first on-stage run-through a day after the set was loaded on stage. At this point, lighting, sound and costumes are still being created and tweaked.

Opening night and beyond

All this week, cast and crew will be taking part in dress rehearsals leading up to the show’s opening night Friday. Costumes will be finalized. Tweaks will be made to sets and props. Sound, lighting and more will be fully implemented during these final moments of preparation for the show’s three -week run.

Civic recently announced its 2013-2014 season, the theatre company’s 99th. With it comes five more shows scheduled to take place during the next year. Although the content may change each year, the group’s work and dedication to theater does not.

With the wrap of “Into the Woods,” Trinkle, Sorbera and others will begin work on casting, sets and orchestra hiring for next season’s first show, “Pippin.” Other shows planned for the season are “The 1940’s Radio Hour,” “Joseph and the Amazing Technicolor Dreamcoat,” “Steel Magnolias,” and a Centennial Kick-Off surprise.

For more information on “Into the Woods” and the Civic’s upcoming season, visit www.civictheatre.org.