You are at:Home»Lifestyle»Blueprint For Improvement»Guest suite remodel features old-world feel 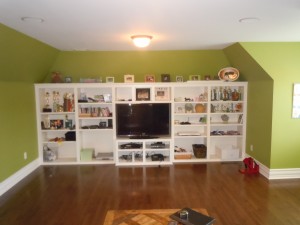 ORIGINAL SPACE: This West Carmel home was built in the 1980s, and the current homeowners have lived there for eight years. According to the homeowner, “The space was a kid’s playroom. They now have the basement to use, so we wanted to turn it into an extra bedroom suite for family and guests. We were picturing a grandmother’s suite.”

DESIGN PHASE:  The original footprint worked fairly well for the new design, though walls and plumbing had to be added to allow for a new bathroom. Adding the bathroom required that the double doors into the bedroom be moved as well. The slope of the ceiling was raised to 10 feet, stealing space from the attic, but not altering the exterior roof line.

WOOD PLANK CEILING: To achieve the look the homeowner was going for, the ceiling was covered with engineered wood plank flooring from Castle Combe in a Worcester color. The floors were covered with the same material in a Cotswald color. New maple cabinetry in nutmeg with a black glaze and distressing was used for the window seat and the snack bar areas.

GUEST BATH DETAILS: For the bathroom, 4-inch by 16-inch Silver Disk marble floor tiles set in a chevron pattern were used. The wall tile consisted of a variety of uniquely shaped glass tiles, including a glass molding wainscoting. The shower was laid in Skyline Verona marble, using 1-inch by 1-inch tiles on the floor, 18-inch by 18-inch tiles on the walls, and 12-inch by 12-inch tiles on the ceiling. Chrome Brizo faucets and a vanity from Restoration Hardware finished the space. 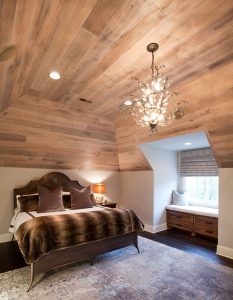 INAL RESULT:  “I wanted an organic elegance style in the design, through texture and color,” the homeowner said. “My favorite part is the wood plank ceiling. Also, the dark brown, distressed flooring idea came from a ski lodge we stayed at in Utah. We liked the warmth and the old-world feel, so we wanted to have that in the guest suite.”