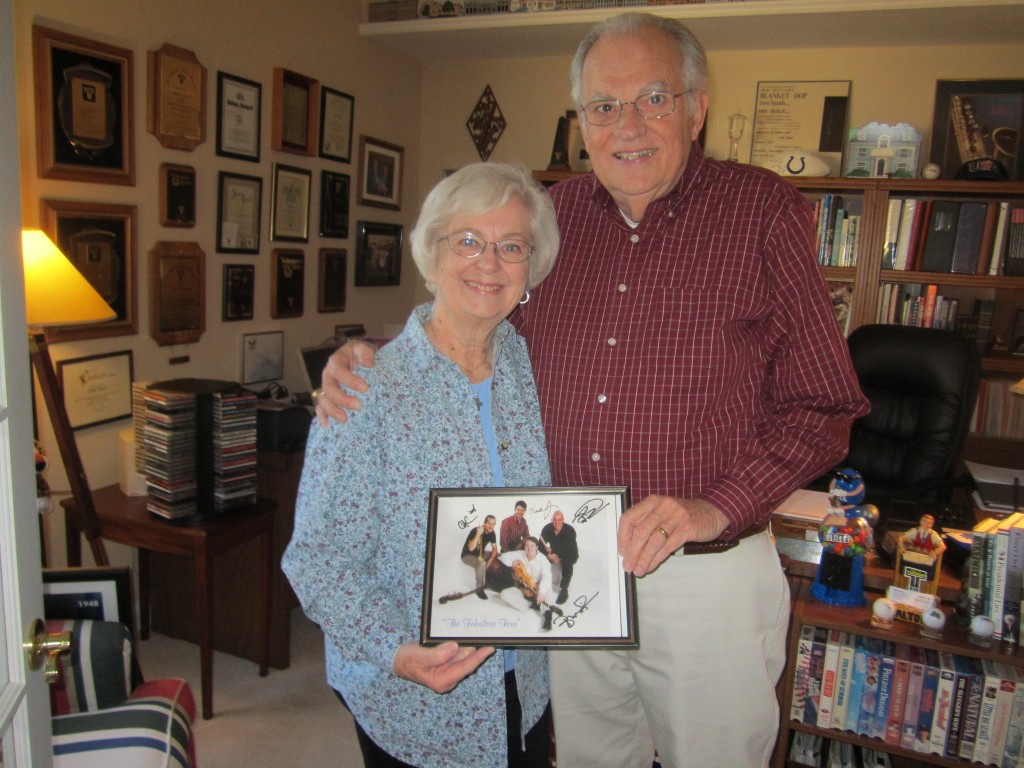 Fishers residents Neil and Sara Lou Lantz in their home with a picture of the new members of the jazz band “Four Freshmen.” Neil is president of the board of directors for the Four Freshmen Society. (Photo by Nancy Edwards)

Today, One Direction tops the charts as one of America’s favorite boy bands. Over 60 years ago, there were the Four Freshmen.

Famous for hits including “Graduation Day,” “It’s a Blue World,” and “(Get Your Kicks on) Route 66,” the Grammy-nominated jazz quartet began in 1948 by four college freshmen who were attending Butler University’s Jordan Conservatory of Music: Brothers Don and Ross Barbour of Columbus, Ind., in addition to their cousin, lead singer Bob Flanigan of Greencastle, Ind. and their friend Hal Kratzsch of Warsaw, Ind. Originally a barbershop quartet calling themselves the Toppers, the band quickly became inspired by jazz vocal, changing their name again to  the Freshmen Four before settling on the Four Freshmen.

“I developed an interest (in the band) in high school,” said Fishers resident Neil Lantz, who has recently been elected president of the volunteer board of directors of the Four Freshmen Society. “I graduated when they were at the top of the charts.”

Discovered in 1950 in Dayton at the Esquire Lounge by jazz band leader Stan Kenton, the Four Freshmen signed up with Capitol Records. “That’s when they stopped being students,” Lantz said. Their climb to success even led to appearing in the 1951 movie starring Jane Powell called “Rich, Young and Pretty.” The band sung “How Do You Like Your Eggs in the Morning?” In 1952, each member of the group received $41 each for their first royalty check.

The original four members of the group toured together for six years; the band transitioned as old members left and new members joined. Flanigan, however, continued with the band until the early ‘90s. The band, in its 22nd group, has had a total of just 23 members over the past 64 years. “That,” Lantz said, “tells you about their success and staying power.”

Since its inception, the Four Freshmen have released nearly 50 albums/CDs, have been nominated for six Grammys and achieved top recognition by Down Beat and Jazz Times magazines. Current members of the musical group, performing together for 11 years now, are Brian Eichenberger, Curtis Calderon, Vince Johnson and Bob Ferriera. The quartet has also recently released a CD titled “Love Songs,” which features a 20 piece string orchestra from the Czech Republic.

In October 1987, the Four Freshmen Society began as a way to honor and remember the group. A friend told Lantz and his wife Sara Lou about the 3,000 member international fan club in 2000. Since then, the Lantz’s have attended annual conventions all around the country that draws fans from as far away as England, Japan and Scotland. “We’ve met some really neat people,” Sara Lou said.

As president of the board of directors, Lantz responds to inquiries, helps to improve the organization, consults for conventions and is a state representative to assist the band during concerts held in Indiana. “It’s a fun hobby for us,” Lantz said. “It meets our musical preferences and brings back memories.”

Next year will mark the 65th anniversary of the musical group. The Four Freshmen Society will celebrate during its annual convention on Sept. 5-7, 2013, at the Grand Wayne Convention in Ft. Wayne. Coincidentally, the convention center is built on the exact site of the original 113 Club, where the Four Freshmen had their first professional engagement in September 1948.