You are at:Home»Current in Fishers»Fishers resident receives Golden Hoosier Award 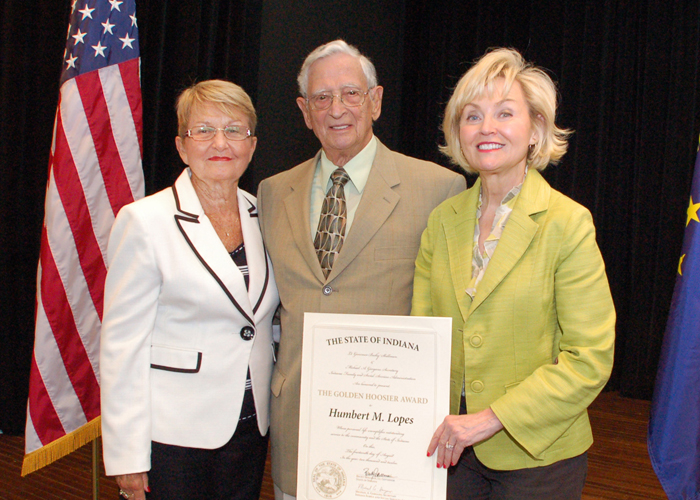 “Humbert’s enthusiasm for helping others and his will to make a difference has made a considerable impact on our community,” said Rep. Kathy Richardson. “His commitment to volunteerism is honorable and inspiring.”

The award was established by Lt. Gov. Skillman in collaboration with the Indiana Family and Social Services Administration to acknowledge and recognize outstanding seniors who work hard to improve their communities, help others, and serve as mentors and caregivers.

Twenty-six senior citizens received a Golden Hoosier Award at the Indiana State Fair, the highest honor bestowed on a senior in Indiana.

Golden Hoosier Award recipients must be at least 65 years old and have at least three years of volunteer experience.

Lopes received a Golden Hoosier Award for his exceptional community leadership that began in 1993. One of Mr. Lopes’ accomplishments was his development of a money management program with FSSA and AARP to help citizens track their financial accounts.

Lopes was nominated by John Holmes at the Hamilton County Council on Aging.

“Humbert Lopes is an outstanding leader. Whether it was during his career as a general manager in Noblesville, or helping with the Aging and Community Services, Humbert has always been exceptional,” said Holmes.