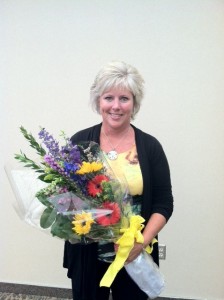 In a surprise ceremony on April 10, Kelly Meyer, second grade teacher at Mohawk Trails Elementary, was announced as the 2012 Stephen A. Backer Teacher of the Year for Carmel Clay Schools (CCS).

Susan H. Backer, widow of Mr. Backer, her daughter, Ellie, and Dr. Jeff Swensson, CCS Superintendent, surprised Meyer and her colleagues by making the announcement at her school.

Through her numerous nominations, Meyer was described as “tirelessly giving of herself within the classroom and the community – teaching more than just reading and writing but about philanthropy, giving, kindness, and respect for others.” Meyer will now represent CCS in the state Teacher of the Year competition.

“Kelly’s pursuit of positive, rigorous, and effective instructional strategies brings wonderful results for the children in her classroom,” Dr. Swensson said. “Ms. Meyer’s excellence, as reflected in this honor, represents the high standards she’s brought to the Carmel Clay Schools throughout her career.”

Meyer was hired by CCS in 1999 as a 21st Century primary teacher and later taught third grade at Cherry Tree Elementary until 2011 when she transferred to Mohawk Trails Elementary as a second grade teacher.