You are at:Home»Current in Carmel»Carmel Community»Current editor, reporter Ambrogi to join sports writing Hall of Fame

Mark Ambrogi, an editor and reporter for Current Publishing, is among six inductees selected for the Indiana Sportswriters and Sportscasters Association 2023 Hall of Fame Class. 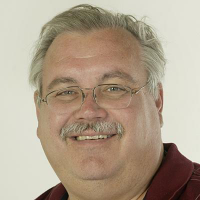 “I’ve never been overly concerned with awards, but this one is special because of how many of my former Indianapolis Star colleagues and friends from newspapers around the state are in the Hall of Fame,” said Ambrogi, a Carmel resident.

A Cincinnati native, Ambrogi – known to his friends and colleagues as Ambro – grew up with a love of newspapers and sports. He knew he wanted to be a writer by the time he was in junior high and pursued that dream by studying journalism at Indiana University.

Among his most memorable moments professionally was watching quarterback Drew Brees lead the Purdue Boilermakers to a last-minute 37-34 victory over Kansas State in the 1998 Alamo Bowl. Covering 12th-seeded Ball State nearly upsetting No. 1-seeded UNLV in the 1990 NCAA Sweet 16 in Oakland was another top moment, Ambrogi said.

Other career highlights include 1-on-1 interviews with legends such as Arthur Ashe, Billie Jean King, Pete Sampras, Andre Agassi, Mario Andretti, Tony Stewart and many others, he said.

“One of my favorite interviews was when John McEnroe gave me 30 minutes after winning a senior pro event in Chicago about the state of U.S. men’s tennis,” Ambrogi said. “I watched through the years as McEnroe went from often being testy to one of the game’s most quotable spokespersons.”

Ambrogi joined Current Publishing in 2014. His work can be found in all six editions, including in the Night & Day section, which he manages.

“Mark has been an extremely noteworthy veteran presence and contributor at Current since joining our team,” said Steve Greenberg, Current co-owner. “Although he is being honored for his impressive collection of work as a sports writer, and we sincerely salute him for that and celebrate it, he has proven himself to be equally adept at reporting and writing on a wide variety of other topics for our six newspapers and special sections as well as in serving as editor of our Night and Day section. Mark is a ‘pro’s pro,’ and we value him and his body of work.”

Ambrogi will be inducted into the Hall of Fame during an annual awards banquet set for April 16 at the Valle Vista Country Club in Greenwood.