You are at:Home»Current in Westfield»Westfield Cover Stories»Strongest Human Being’: Westfield mother seeks surgery outside the U.S. to help daughter’s rare bladder condition

Ashlyn Thompson just wants her daughter to have the best life possible.

Exstrophy means turned inside out. Bladder exstrophy occurs, on average, in 1 in every 50,000 births, with two-thirds of the cases being male.

“No one expects to have kids with a medical complexity, for one,” Thompson said. “Never did I think I would come to the realization that I can’t give my child what they need here in America. This whole concept of medical tourism I hadn’t even heard of the term. When I heard about people going out of the country to get medical procedures, I always thought it was plastic surgery, those terms of things people do because it’s less expensive in a lot of places. I just assumed we would have the best here.”

Thompson said Dr. Martin Kaefer, Emery’s urologist from Riley Children’s Health, has been supportive and has helped with consultation with Great Ormond. Emery will be the first American patient to have the procedure at Great Ormond. The surgery is expected to be performed in early April.

The procedure is not covered by insurance simply because it is not performed in the U.S., Thompson said. Until recently, Thompson had hoped the surgery would be covered by the family’s insurance. She said research shows the procedure has significantly higher success rates than options available in America. She said children who have the surgery in America often need surgeries again in later life.

Thompson has started a GoFundMe page to help raise $65,000 for the surgery and costs of travel and staying in London for up to six weeks. The surgery costs $45,000, which Thompson said is cheaper because of England’s national health care plan. All funds raised above the goal will be donated to the Association for the Bladder Exstrophy Community that supports research and provides life-altering surgery to bladder exstrophy patients in low-income nations.

Seven weeks after Emery was born, she had a surgery to put the bladder in the right place. Doctors had to break her pelvis on both sides

“It was an 11-hour surgery, and we almost lost her twice,” Thompson said. “She coded a couple hours after surgery. A couple hours after that, her blood pressure tanked and there were concerns. That little girl is the strongest human being I know. She fought back. My faith is the one true thing. I have a fantastic family support system.  She had her legs in casts for 29 days and we couldn’t pick her up. Not being able to hold your child for that long and seeing them in that much pain was traumatic. She was in the hospital for 33 days.

Thompson said surgery at Great Ormond is performed right after the child is born.

The Kelly procedure takes different parts of the pelvic floor to recreate the bladder sphincter.

“It’s harder for Americans to change things,” Thompson said. “I’ve learned a lot. I have full trust that everyone here that treats this condition has the best intentions, but in medicine there is a lot of, ‘This is the way we’ve always done it.’”

In contrast, Thompson said a majority of patients in the U.S. undergo a bladder augmentation as early as age 4 and some wait until grade school. Thompson said it is paired with the Mitrofanoff procedure, which allows the patient to be dry but rely on self-catheterizing through the stomach from there on out.

Thompson said she will push to make insurance policy changes in the future.

“It’s rather eye-opening to see there are limitations to someone who has a rare condition,” Thompson said. “She shouldn’t have to stick with less optimal options. It’s not something personally I’m going to let go. I’m going to work with organizations already in the lobby arena.”

Thompson, regional marketing marking for AgReliant Genetics in Westfield, is a 2007 Noblesville High School graduate. She and her husband, Andy Thompson,also have a 5-year-old son, Cole.

As part of GoFundMe, there is a #InsideOutForEmery challenge to bring awareness to the rare congenital defect. 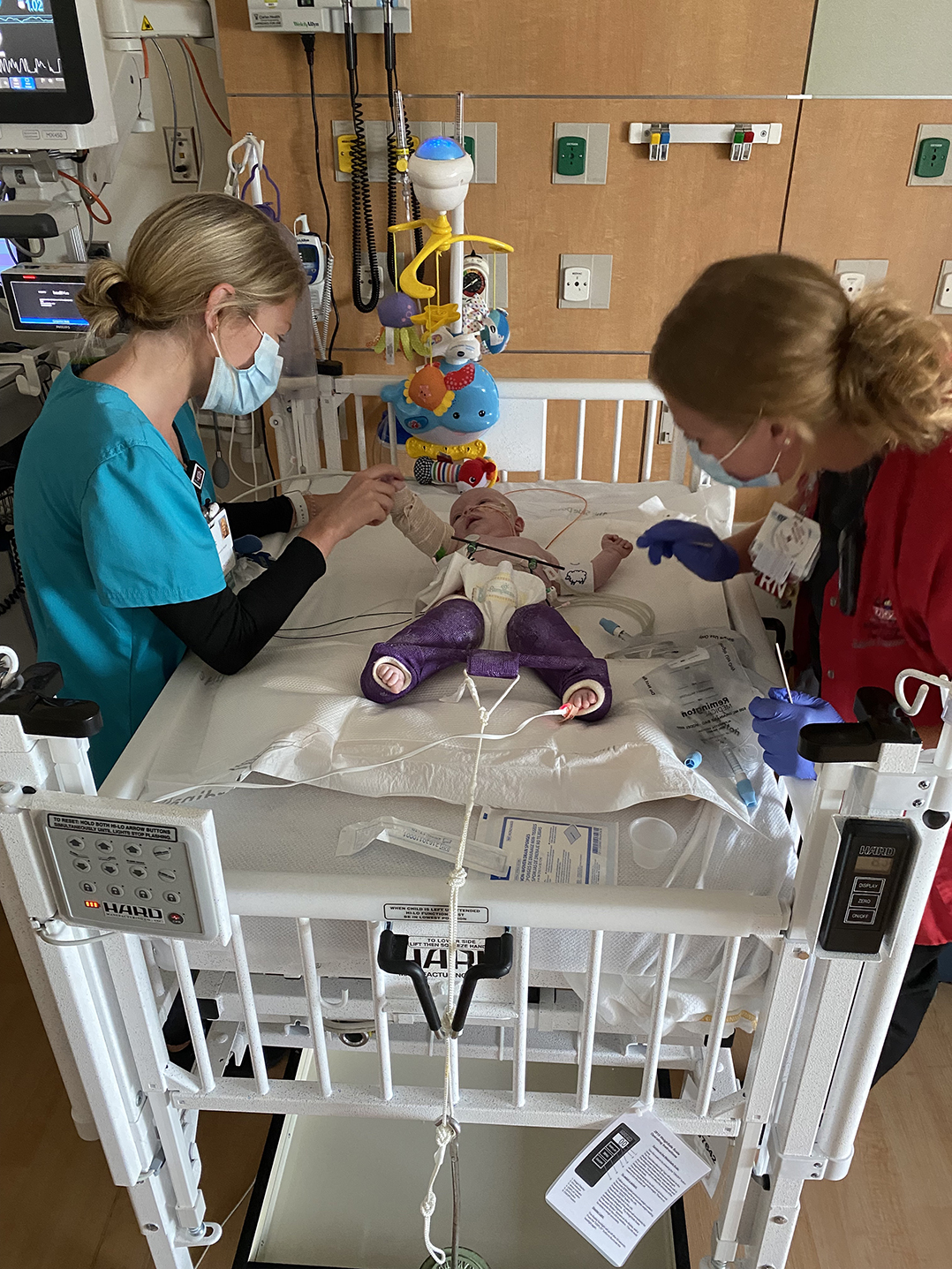 Ashlyn Thompson and Emily K. Whiting had been friends before each gave birth to a daughter with medical complexities.

Whiting’s daughter, Charlotte, has a rare undiagnosed disease. Charlotte, 5, has an anomaly with almost every organ.

“She is a walking miracle,” Thompson said.

Whiting said there are more than 20 specialists involved with Charlotte’s care.

“The focus is on parents and caregivers who have medical complexities,” Whiting said.

Thompson and Whiting started the “Empowered by Hope” weekly podcast in December.

“When Ashlyn called me and pitched the idea of a podcast, it really fit with the direction I was trying to go with my ministry, which was to figure out to reach those parents and caregivers at their greatest time of need,” said Whiting, who recently published a book called “She is Charlotte.”

“We’re focusing on parents and caregivers who are receiving the diagnosis for their child,” Whiting said. “Our goal is to serve those navigating this world of pediatric medical complexities. We want to support them and help them feel not alone and equip them to be their child’s best advocate.”

Thompson said seeing your own child in pain is something any family can empathize with.

“We are working on building resources,” Thompson said. “We really want to work on creating advocacy coaching for those families to help empower them so they feel like they know how to handle their child’s care and get what they need  to get whatever quality of life they can provide.”