You are at:Home»Current in Carmel»Carmel Cover Stories»Looking Ahead: Redevelopment, roundabouts, municipal elections in store for 2023

The year 2023 is shaping up to be a busy time in Carmel, with redevelopment projects underway throughout the city and all municipal offices on the ballot. The year will see the addition of roundabouts throughout town, trails near the White River and new members on the school board.

The year 2023 is a municipal election year, meaning the offices of mayor, city court judge, clerk and all nine city council seats will be on the ballot.

Carmel Mayor Jim Brainard announced in September that he will not seek an eighth term, and as of press time three city councilors have announced campaigns for mayor. Kevin “Woody” Rider and Sue Finkam will face off in the Republican primary on May 2, and Miles Nelson, a Democrat, will run against the winner in the general election on Nov. 7. Other candidates could enter the primary races through Feb. 3, when filing ends.

Several candidates – all Republicans so far – have announced campaigns for city council. They are:

Brainard, who has been Carmel’s mayor since 1996, said he’s had several people ask him to reconsider his choice to step down, but he remains confident the timing is right.

“It was an agonizing decision to make, but once I made it I felt very good about it,” Brainard said. “I never intended to run this many times.” 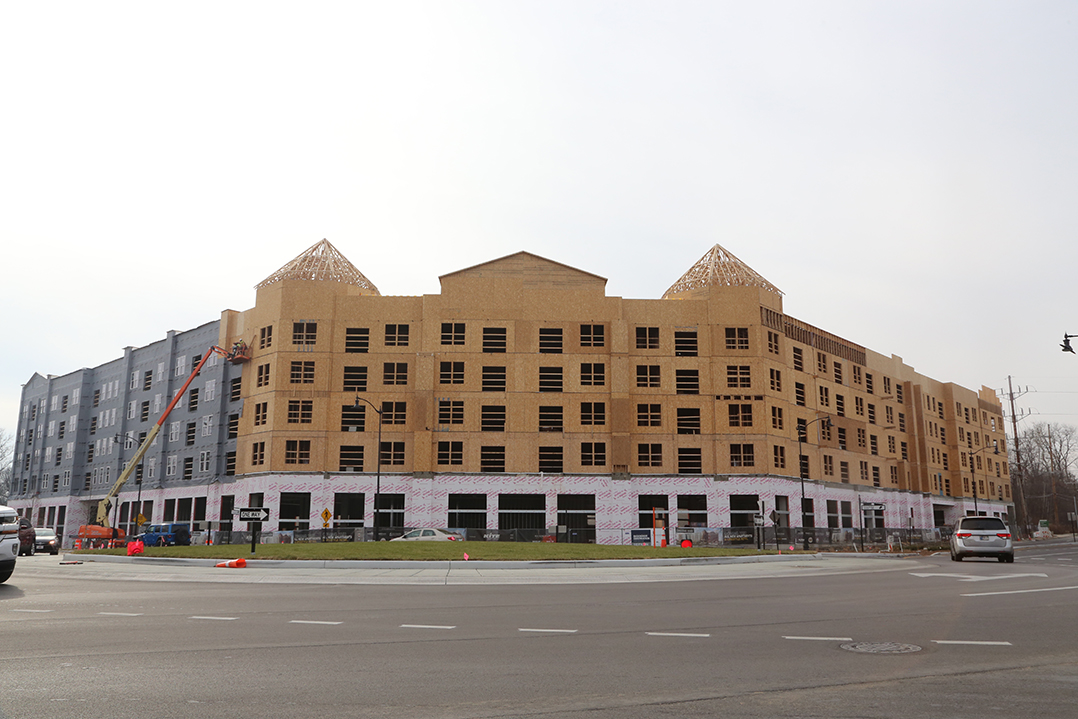 Redevelopment across the city

It’s not unusual for construction to be underway on multiple redevelopment projects in Carmel in a given year, but in 2023 much of the work will move beyond the city’s core, where it’s been focused in recent years.

“I get to drive around the city and see eight or 10 cranes up at the same time all over the city,” said Henry Mestetsky, director of the Carmel Redevelopment Commission. “That’s the magic. That’s the special thing, that so many people are going to get the benefit of these redevelopment projects.” 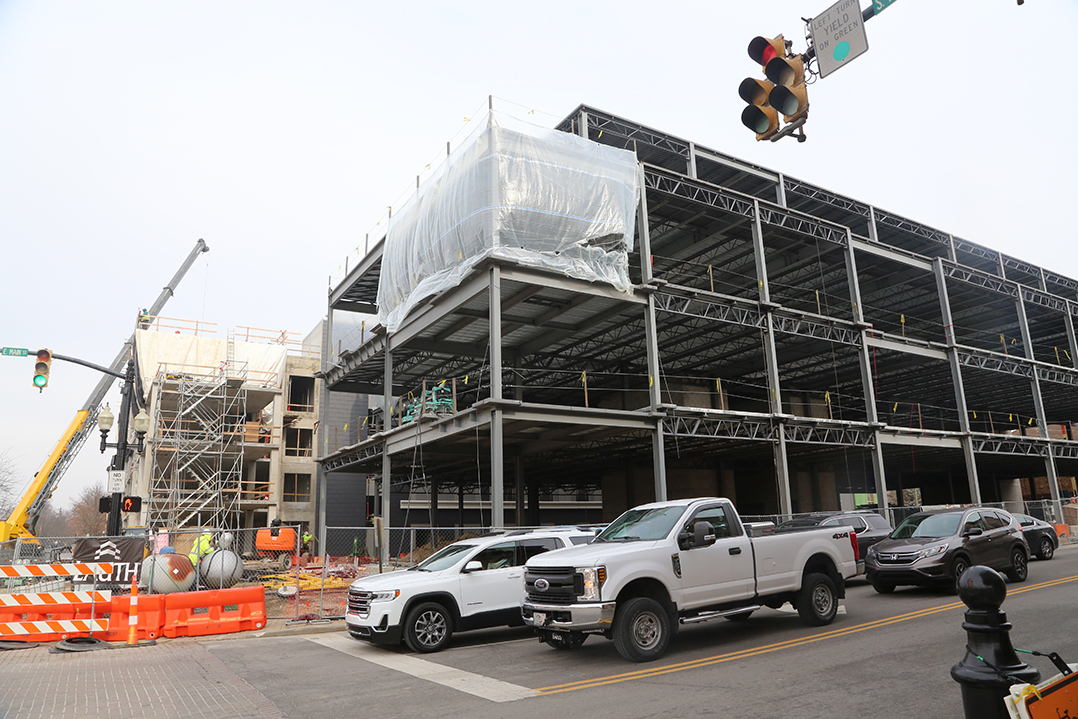 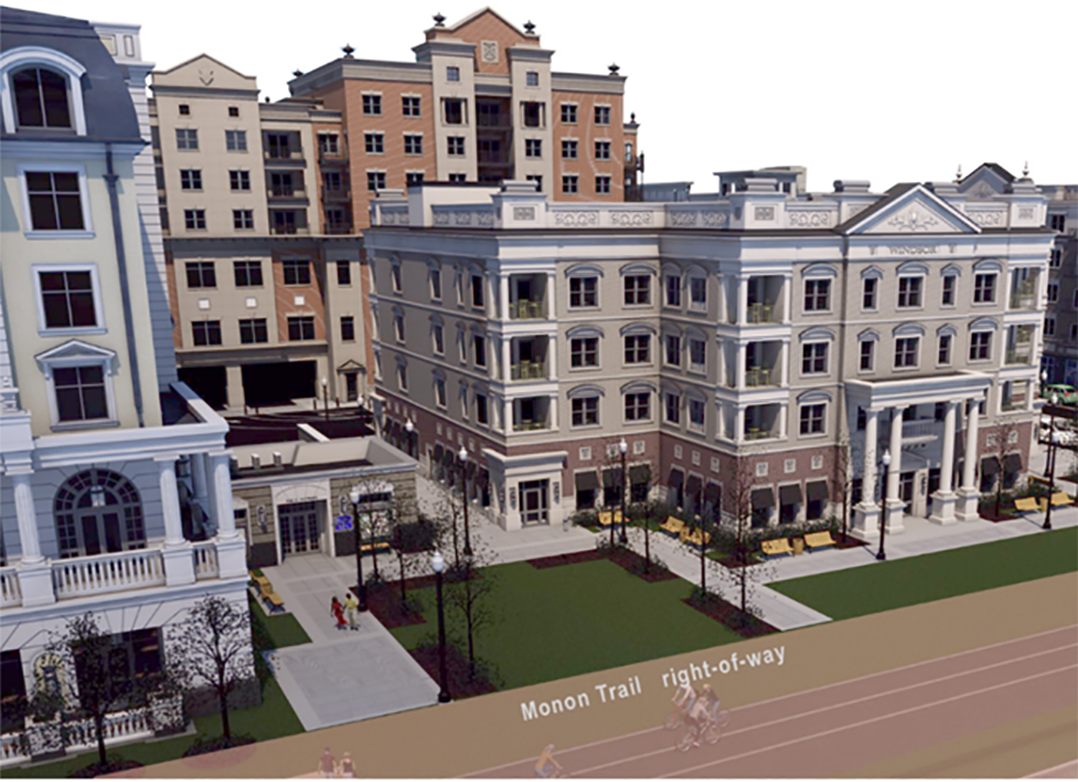 After years of patience and planning, work is set to begin in 2023 to increase access and connectivity along the White River corridor. Carmel Clay Parks & Recreation Director Michael Klitzing said this has been a goal of the department since its founding in 1991.

“Just the fact that we’re going to be making progress on such a major greenway network along the community’s most significant natural resource is really exciting,” Klitzing said.

Work should begin to construct a trail near and along the White River from 146th Street to Tall Timber Run, where it would connect with an existing trail. The northern portion of the expanded trail will be on an easement through property owned by Conner Prairie. The project also includes a new trailhead with parking and restrooms and two river overlooks. Another trail expansion will begin at River Heritage Park and connect to the existing perimeter trail along River Road that currently ends just south of 122nd Street.

Once complete, the trail system near the White River will stretch 5.4 miles, making it longer than the Monon Greenway that runs through central Carmel.

Other CCPR projects planned for 2023 include expanding the trail in Central Park to complete a loop around the lagoon, replacing of some of the MCC fitness equipment, renovating the MCC indoor waterslide tower, adding more cabanas to The Waterpark, building three new shelters and adding trails in West Park, adding benches and other upgrades in Meadowlark and River Heritage parks and adding AED stations in parks and at trailheads.

Also in 2023, CCPR plans to present a proposal to Carmel Clay Schools to use land the school district owns near Main Street and River Road for a dog park and community garden. 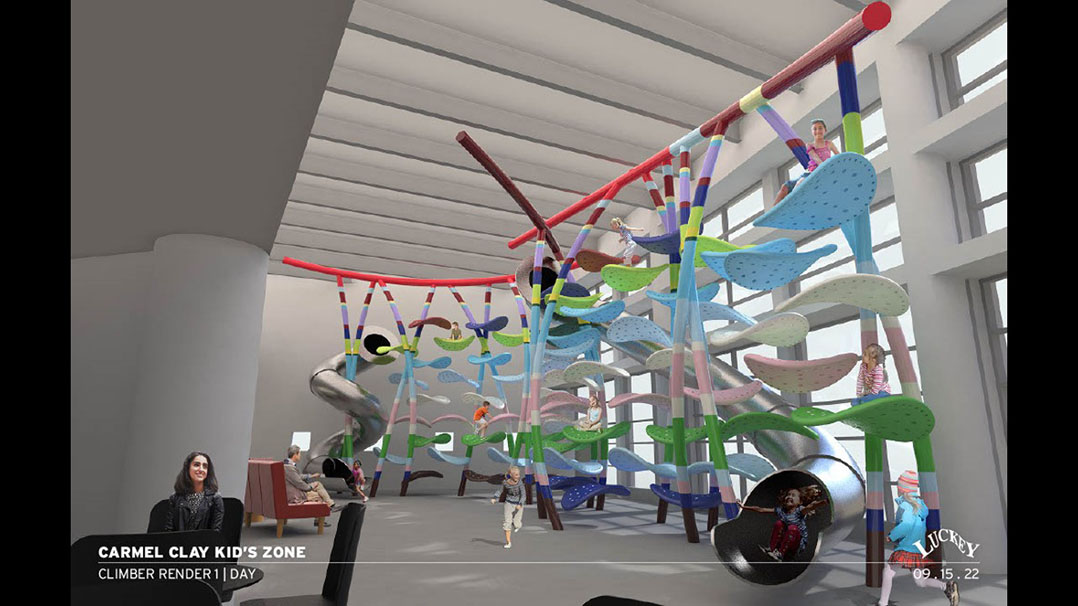 The indoor playground planned at the Monon Community Center. (Photo courtesy of CCPR)

Klitzing said work could begin in 2023 to construct an indoor playground at the Monon Community Center, although it is unlikely to open next year.

“To be able to provide an indoor experience, especially on cold days, I think will be incredibly well-received,” Klitzing said.

Several road projects are slated for 2023 throughout Carmel.

By summer, work will be under way on 3rd Ave. SW from 2nd Avenue to City Center Drive to complete road reconstruction and add a multi-use path. The city also expects to build a roundabout at City Center Drive and Veterans Way after the Carmel Marathon and have it completed before CarmelFest.

In the fall, College Avenue is set to be reconstructed between 96th and 106th streets, and a roundabout is planned at 106th Street and Hazel Dell Parkway.

The city expects to release a more detailed schedule of road projects in early 2023.

An expansion of the Carmel Police Dept. headquarters is set for completion in late 2023. The new building will triple the capacity of the existing CPD headquarters and add space for Carmel City Court and the City Clerk’s Office.

The new Carmel Fire Dept. headquarters building is also expected to be complete in 2023. The project includes a museum, community gathering space and a safety village experience for children.

Officials are aiming to break ground in the spring on the Carmel Clay Historical Society Museum. The three-story, 15,000-square-foot building is set to have space for galleries and exhibits, community meeting space, public restrooms, archives, a gift shop and a rooftop garden. 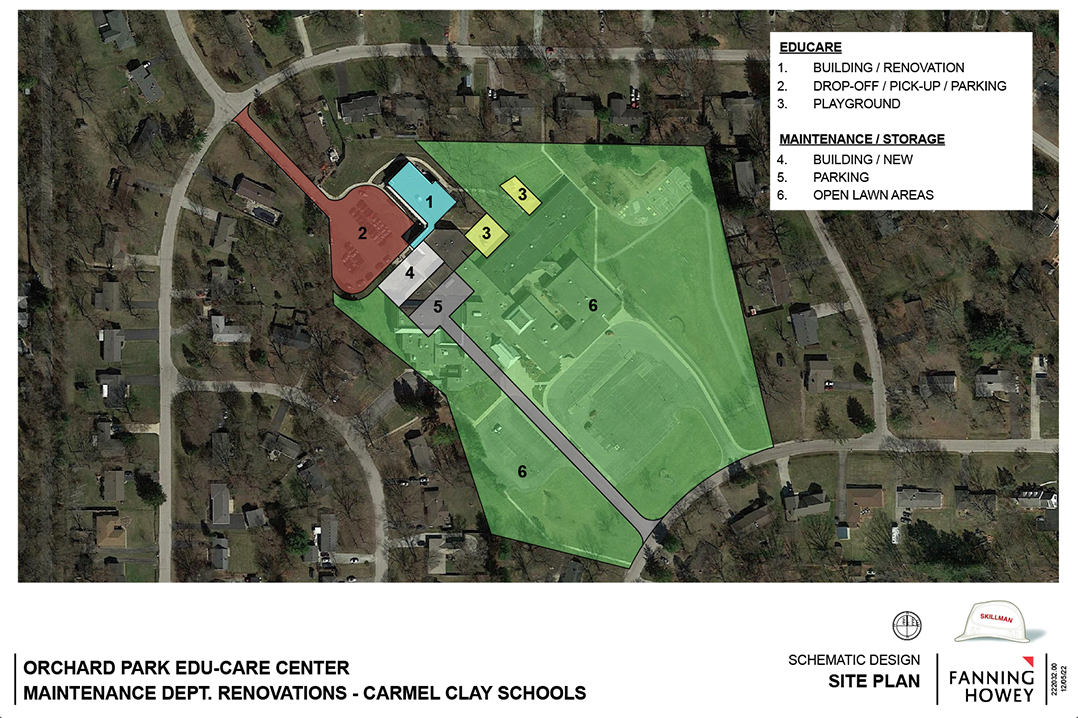 The 12-acre site of the former Orchard Park Elementary campus is proposed to be used for Edu-Care, storage area and green space. (Image courtesy of CCS)

New school board members Kristen Kouka and Greg Brown will take office in 2023, and incumbent Jennifer Nelson-Williams will begin her first full term.

Construction will continue to expand the natatorium, a $43 million project set to be complete in mid-2024. The project will add a 50-meter competition pool, diving well and therapy pool. Once work is complete on the new structure, CCS will upgrade the existing natatorium.

Work is set to begin in the spring on the Greyhound Activities Center, a $9.5 million pre-engineered structure north of the Carmel High School football stadium. The building is set to provide indoor practice space for the marching band and winter guard, with athletics and other student groups expected to use it, too. The project is expected to be complete in 2024.

Another project set for 2023 – pending school board approval and the outcome of a lawsuit – is transforming the former Orchard Park Elementary building into an Edu-Care site. The district aims to have the project complete by the end of 2023.

Also pending school board approval is a 14,000-square-foot Polytechnic addition to CHS. If approved, work is set to begin in the fall of 2023 and be complete a year later.