You are at:Home»Current in Westfield»Westfield Cover Stories»‘Culmination of a dream’: Annual Westfield in Lights event draws hundreds of people to Grand Junction Plaza

It was a dream come true.

Those were the words spoken by Westfield Mayor Andy Cook following the lighting of a 30-foot-tall Christmas tree Dec. 3 at Grand Junction Plaza during the Westfield in Lights event that drew an estimated 500 to 600 people. It was the first time the event was held at Grand Junction Plaza since the park opened last December and featured more than 30 vendors, games, caricature artists, llamas and more.

The Westfield Middle School choir performed a variety of familiar holiday songs, including “Silent Night,” for attendees spread out across the lawn as an unlit Christmas tree stood as a backdrop. Westfield in Lights wasn’t just about lighting a Christmas tree, however, as Santa Claus also made an appearance on a Westfield Fire Dept. firetruck that drew plenty of excitement from children in attendance. 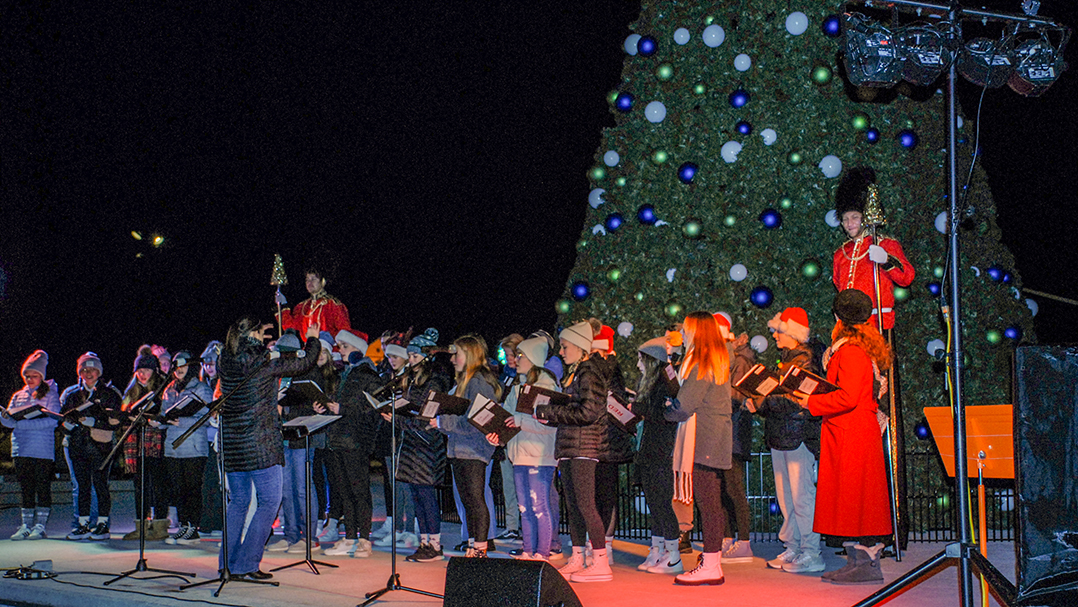 Cook took a moment to remind attendees that while the city was waiting a while for the tree lighting event, it was important to remember the significance of the season.

Cook said that the annual event being held in Grand Junction Plaza was particularly significant.

“We’ve been dreaming of this location for over 15 years and we’re finally here (in this) beautiful, beautiful location,” he said, drawing cheers from the crowd. “Our dream was to have a place where families can gather and make memories and to do the tradition of Christmas and other events for years and years to come, and this is where it’s going to happen.”

Cook thanked Kayla Arnold, director of Westfield Welcome, and her staff for putting together Westfield in Lights and other events that happen throughout the year. Cook was joined on stage by two of his grandchildren, Oliver and River Andrew, before counting down from 5 to mark the occasion of the tree lighting.

Cook said after the tree lighting that it’s been a dream for 15 years to have a central location where people can gather. He also recognized the hundreds of people in attendance, saying it represented several things and that having Westfield in Lights in Grand Junction Plaza was special.

“This is a culmination of a dream from years and years ago,” Cook said. “It’s all about Christmas, it’s about the holiday season, it’s about the family values that Westfield represents.”

Arnold thanked the community for its support.

“It’s incredible. To stand up on the stage and see the lawn full of people has been a dream all year,” she said. “I’m at a loss for words, quite honestly.”

Arnold also said that families have continued to make Westfield in Lights an annual tradition, especially as their families continue to grow.

“It’s been fun to see that progression and it’s such a blessing,” Arnold said.

For residents such as Megan Brink, Westfield in Lights was a good way for her family to spend time together as her daughter, Molly, was among the students performing with the Westfield Middle School choir. Molly Brink said it was exciting to perform for the crowd.

“It’s just nice to do it in such a beautiful place, too, with the tree and giant stage, and it was really fun,” she said. 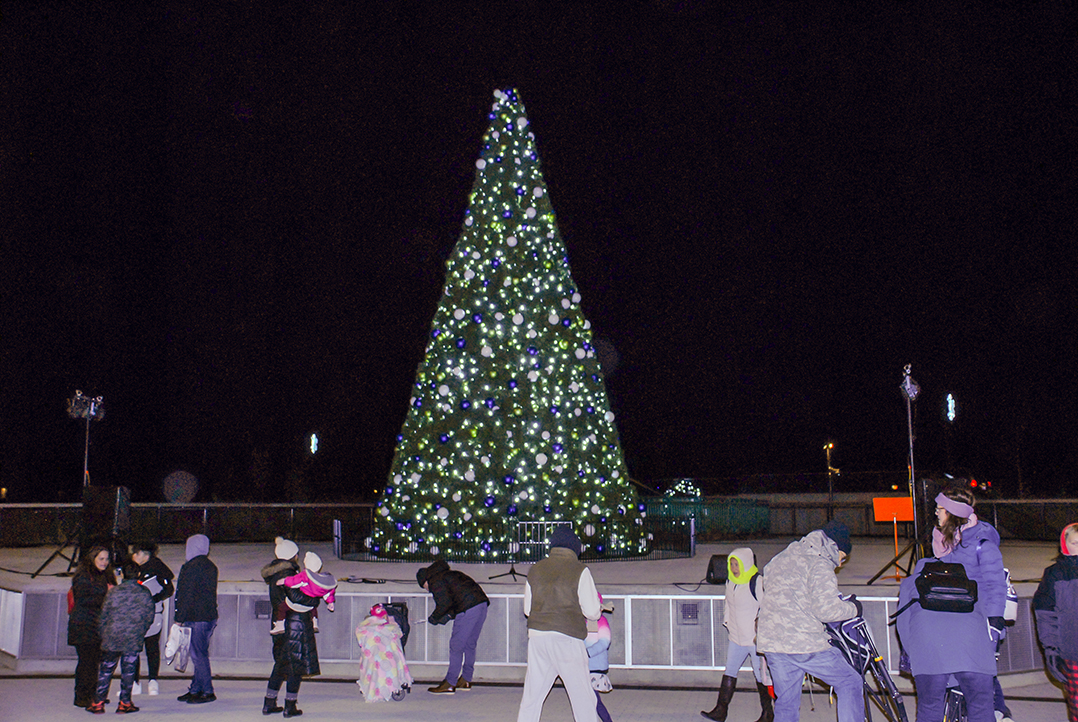 A lit-up Christmas tree is seen in Grand Junction Plaza during Westfield in Lights Dec. 3. The event drew an estimated 500 to 600 people and marked the first time it was held at the park since it opened a year ago.