For Marie Osmond, Christmas is about memories, not possessions.

“I feel people need a little bit of hope, a little bit of laughter and some love,” she said. “They actually need to be together. My philosophy has always been, ‘Do you remember what you got for Christmas five years ago?’ But I do remember the time I spent with friends and family, going to events and having dinner. Those are the things that make memories, and those are the things I like to provide for people.”

Osmond wants to add to the audience’s memories with an 8 p.m. concert Dec. 10 at the Palladium at the Center for the Performing Arts in Carmel. It is Osmond’s first visit to the Palladium and is part of her symphonic Christmas tour. 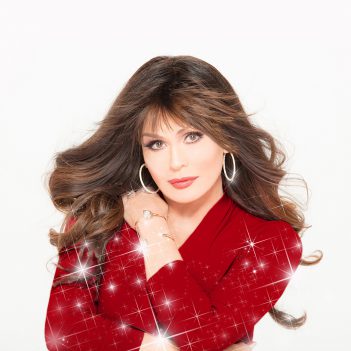 Marie Osmond will perform at 8 p.m. Dec. 10 at the Palladium. (Photo courtesy of Marie Osmond)

“I’ve been associated with Christmas since I was a fetus,” Osmond said. “I started out with Andy Williams’ Christmas shows at 3. I did my first Bob Hope Christmas show when I was 13, and he kind of became a second dad. I did USO Christmas shows and then Donny and Marie and Osmond Family (shows), so I know a little about Christmas. It’s super fun.”

Osmond will perform a couple of songs from her 2021 album “Unexpected,” which feature a collection of Broadway and opera classics that debuted at No. 1 on Billboard Classical Crossover Albums Chart.

“It blew my mind,” she said. “I didn’t think it would do anything. It was me spending 25 years learning to sing legit opera.”

Osmond, 63, said the type of Christmas music she performs fits well with an orchestra.

“It’s going to be musically diverse, eclectic,” said Osmond, adding she will mostly perform Christmas songs. “It’s my sixth decade of music performing consistently, which is crazy, so I’ll do a few things that people will enjoy.”

“He’s going to die Wayne Newton,” Osmond jokingly said of her brother. “It was lovely (that) people came 11 years to see the show. In my heart, I felt I needed to go to people, especially because traveling is costly right now. I love the road. I’ve probably performed more on the road than anyone in my family, whether it was doing Rodgers and Hammerstein’s ‘The Sound of Music’ or ‘The King and I’ and my country shows and things like that. I think people appreciate you coming to their towns.”

Osmond had her first No. 1 country hit, “Paper Roses,” as a teenager.

Osmond said she will share stories of her career during the concert.

“I think the whole part of the holiday spirit is to interact,” she said. “I think a good location is important. I hand-pick all these areas. I wanted to go to places that I haven’t been. Although I swear I’ve performed everywhere, from fairs to festivals to honky-tonks, I wanted to put this show in places where I felt people would enjoy it.”

Her nephew, David Osmond, will perform with her.

“He’s a phenomenal talent,” she said. “I don’t use him because he’s an Osmond. I use him because he’s terrific. He has an amazing story. He teases me, ‘I know why you have me in the show, so you can make costume changes.’ I said, ‘OK, there you go.’ But, no, he’s terrific. There will be things that bring back wonderful Christmas memories. We’ll have some new things.”

“I believe in (doing) that. There are so many talented musicians,” she said. “Some of them have been performing five or six decades, too. It’s nice to utilize local talent.”

One thing that drives Osmond is meeting fans.

“When we did the show in Vegas, the show would be an hour-and-a-half and my meet-and-greet would be like three hours,” she said. “I’ve been through a lot of difficult things and people know that I understand, so they will come and talk to me about things. God doesn’t care who you are in this life, he cares about how you do your job and how you treat other people. That’s my philosophy.”