The scenario that sculpted the name James Will Watson has used the past eight years could be mistaken for lyrics to a country song: Young guy in a Corpus Christi bar ordering a drink; attractive young lady serving him doesn’t hear his name correctly because of the loud music playing; mispronounces it; and River James it is.

A Dallas native who grew up mostly in Wills Point, Texas, a town of 3,500 tucked away in the state’s northeastern corner, the 32-year-old now resides in Westfield, where he writes and plays country music.

James, who aspires to eventually use his talents on an acoustic guitar to entertain and inspire larger audiences with his brand of outlaw and folk country, understands the importance of a positive attitude to achieve his objective. 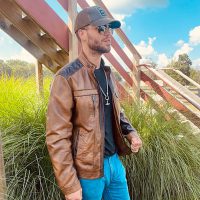 If the past eight months are any indication, he’s well on his way.

In March, James was diagnosed with anaplastic pleomorphic xanthoastrocytoma, a brain tumor that occurs most frequently in children and teenagers.

“During the scans, they discovered a tumor,” said James, who said the tumor is on the right side of his brain. “I did have the chemotherapy and radiation starting back in July and finished it in August. My dad passed away 17 years ago of a brain tumor. They were on the hunt for his medical records but have kind of hit a dead end.

“I haven’t once gotten down about it. I’ve got the Big Man upstairs on my side.”

James has lived in Indiana since 2017, his years here carrying a very distinct Hamilton County flavor.

James worked as a barn hand in Sheridan prior to his chemo treatments, formerly lived in Noblesville and is now in Westfield. He used to paint houses and perform other tasks to earn a living, all while continuing to write and perform music. The latter is a love born from a lifelong love of country music, and his uncle Dave’s rather unique instruction.

“When I was 18, he heard me singing and said, ‘You need a guitar in your hands,’” James said. “He told me I needed five beers before I would even pick up a guitar. He thought that would keep me loose and from getting frustrated.”

On Oct. 1, the Benefit for River James concert was performed in Carmel, raising approximately $2,000 to help with his medical bills while away from work.

He begins his second round of chemotherapy in early December.

James, who through age and circumstance, admits he has mellowed greatly from the man he was in his shot-glass-raising 20s.

At the same time, he wants to musically give Indiana a taste of Texas.

“This has made me a more spiritual person,” James said. “I have an appreciation for the ground I walk on. I’ve been given a second chance. I have a spark beneath me, and I won’t settle for second. I’ve made some good connections here in Indiana, and they’ve helped me get back on my feet.”

James, whose single “Ballad of a Drinkin’ Man” is available on Spotify, is determined to make the most of it. For more, James’ Facebook page contains covers of other songs.