You are at:Home»Current in Geist»Geist Community»State representative announces bid for Indy mayor

Indiana House State Rep. Robin Shackleford announced Nov. 10 that she will be entering the race for Indianapolis Mayor. Shackleford, a Democrat and chair of the Indiana Black Legislative Caucus, made the announcement at the Madam Walker Legacy Center in Indianapolis.

Democrat incumbent Joe Hogsett announced on Nov. 15 that he intends to seek a third term. The next Indianapolis mayoral election is Nov. 7, 2023. 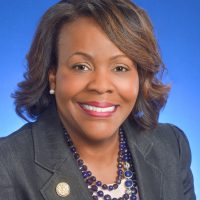 An Indianapolis native, Shackleford said she has dedicated her life to public service. She was first elected to the Indiana House of Representatives in 2012. She represents District 98, which covers the southern portion of Lawrence.

“Indianapolis is a tale of two cities – one with good roads where residents don’t worry about putting food on the table and feel safe in their homes, and another with pothole-ridden streets where residents struggle to get enough to eat and worry that at any moment a stray bullet will travel through their wall and strike their child,” Shackleford said. “We need to bridge the gap between the two different versions of Indianapolis and prioritize making Indy a safer place to live, work, play and raise a family.”

If elected, Shackleford said she would focus on seven main areas as mayor, including making Indianapolis a safer place to live, work and play by addressing root causes of crime, such as poverty, mental health, drug addictions and gangs. She also wants to broaden economic growth in all parts of the city by making doing business easier, increasing affordable and equitable housing by developing residences without displacing residents, addressing homelessness humanely and more.

Shackleford also has a background in project management, supervision, training and budgeting in the private sector. She is a graduate of Indiana University and IUPUI, having earned bachelor’s and master’s degrees in public affairs. She serves as board president for Pathway Resource Center.