If you’re looking to toss out old junk that you longer need, Noblesville teenager Michael Corlew will gladly haul it away.

The 17-year-old Noblesville High School junior is seeing much success after launching his own junk-hauling business, MB Junk Removal, which picks up items people no longer need or want such as furniture, appliances and more. Corlew said he got his start as an entrepreneur picking up dog waste in his neighborhood at age 14 and eventually saved enough money to purchase his great-grandfather’s truck.

“At first, I had no idea what I was getting into,” Corlew said.

Corlew said he connected with an individual on Facebook, who suggested that he get into the junk removal business. He landed his first junk hauling job a year ago for his dad’s co-worker, in which he picked up three loads of unwanted items.

“We took it to the dump, and I was like, ‘You know what? I can turn this into something,’” Corlew said.

Corlew decided to create his own Facebook page for his business, which he promoted on the social media platform, and quickly saw the demand for services go up within his own neighborhood. He also increased his overall business presence by creating Facebook ads that resulted in five to six jobs per week, he said.

The creation of his own business also means Corlew is enjoying plenty of financial success, noting that he has earned more than $18,000 since the start of the year. He is also able to set his own schedule and works on Saturday mornings.

Corlew said his prices are lower in comparison to other junk-hauling businesses – he only charges $120 per truckload – and reflected on his prior work in his own neighborhood picking up dog waste.

“What is a job that I could do that no one else wants to do?” Corlew said. “And when you think of junk removal, a lot of people think it’s nasty, disgusting, (but) it’s really not.”

Corlew has also created weekly video ads to market his services picking up junk that are offered in Carmel, Fishers, Noblesville, Westfield and other nearby communities.

“I wanted to stick out from everybody else,” he said.

One benefit of running his own business is the flexibility that comes with it, he added.

“I love creating my own schedule, I love being my own boss,” Corlew said. “What motivates me is having financial freedom down the road.”

Corlew said there is no shortage of items that he has picked up, noting that he’s hauled away old toilets, mattresses, furniture and cabinets, among other items. He said his most interesting and memorable find so far has been a tub of 1989 to 1997 Playboy magazines in mint condition, which he eventually sold to someone he knew.

Corlew’s mother, Stacey, is also proud of her son’s efforts in launching his business off the ground on his own.

Corlew also encouraged others to take a leap of faith in pursuing their own goals.

“Just (having) confidence is 90 percent of it,” Corlew said. “Just jump into it because failure’s going to be your best friend in it, and you can’t learn without failing. But get out there and do it. The upside is way bigger than the downside.” 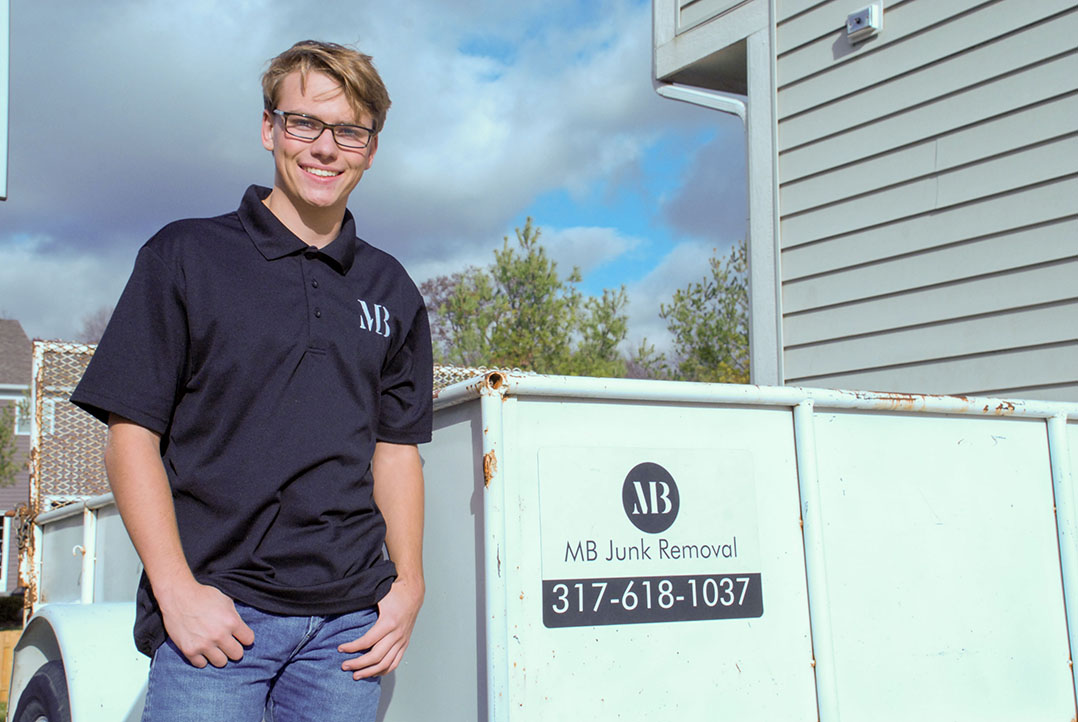 Michael Corlew, 17, pauses outside his home in Noblesville Oct. 26. The Noblesville High School student created his own business, MB Junk Removal, that picks up items people no longer want or need such as furniture, appliances and more. (Photo by Matthew Kent)

For more information or to learn more about MB Junk Removal, call Michael Corlew at 317-618-1037. The business can also be found on Facebook by searching for MB Junk Removal.