You are at:Home»Current in Fishers»Fishers Community»ABC Prep Academy trains students for construction jobs

“This is a moneymaker,” said ABC Prep Academy lead instructor Bill Keevern, who is in his fifth year as a teacher. “This, along with the other OSHA (Occupational Health and Safety Health Administration) classes we teach, are the classes on a student’s resume that catch the employer’s attention. We take this seriously. These are adult-level classes and they have to pass them. This is a written and driving test. They will get a card to say they have the training, good for three years, so this is a big deal for them.”

Keevern said the forklifts are used extensively on job sites.

“We wait a few months to do this, so we know they are well-trained on our safety procedures and their listening skills, and they know how to obey us,” Keevern said. “We will do other classes like this later in the year.”

Robert Kneberg is the director of the academy.

“We do a whole week of the forklift training, and the point is, forklifts are commonly on the job site,” Kneberg said. “We train relevant and retained skills to the workforce. We want to put students into occupations as soon as they are ready to go to work with the skill level needed. We have a 100 percent placement rate with a start day before the school year ends for any student who wants to be in the market for a paid internship or paid adult internship leading to full-time employment. We’re a pathway for real results for our students.”

Junior and senior students typically attend the school for three hours a week.

“This is a real pathway to a career with real results,” Kneberg said. 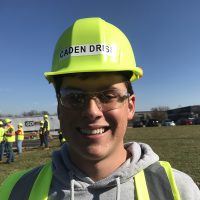 Kneberg said 96 students are enrolled, with 54 participating in forklift training. The students are from Hamilton Southeastern, Fishers and Noblesville high schools as well as homeschool students. There were 50 students during the 2021-22 school year.

Hamilton Southeastern High School senior Caden Drish is in his first year in the program.

Drish, who wants to be a carpenter, said the forklift was the first demonstration in driving. 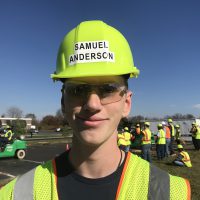 “All these things help me with it,” he said.

Noblesville High School junior Sam Anderson said the school has been very helpful in his training.

“I’ve had an absolute blast,” he said. “I’ve got to refine a lot of my skills, like hammering nails and leveling stuff out. Then doing the most recent fun stuff like driving forklifts. I wholeheartedly want to follow through with this program, the four to five years it takes to get my journeyman’s (license).”

Anderson initially thought he wanted to go into the military when he was younger.

“Then my mother brought up this (program) and I fell in love with it real fast,” he said.