You are at:Home»Lifestyle»55 and Better»Carmel resident’s collection of short stories set for release

Abe Aamidor’s boyhood dream was to be a novelist.

“But I lost my way somewhere along the line and quite serendipitously fell into journalism in my 30s, first at the St. Louis Globe-Democrat and The News-Gazette in Champaign-Urbana, Ill., before coming to The Indianapolis Star,” Aamidor said. 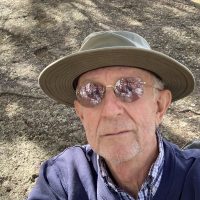 After the feature writer left The Star in 2008, Aamidor,now 75, began writing fiction. The Carmel resident published a hardback novel, “Letting Go,” in 2018 with The Permanent Press.

Aamidor previously had several nonfiction books published, including the biography “Chuck Taylor, All Star: The True Story of the Man behind the Most Famous Athletic Shoe in History,” published by Indiana University Press in 2005 and reissued in 2017, and “Shooting Star: the Rise and Fall of the British Motorcycle Industry,” published in 2009 by ECW Press of Toronto.

“The latter book is a kind of legacy to my wasted years actually riding British and Italian motorcycles when I should I have been focused on more substantial things in life,” Aamidor said. “Overall, I’ve written, co-authored or edited eight books.”

The lead story in the collection is “John Gardner’s Last Ride,”

“It is speculative fiction on what the well-known writer’s last day alive might have been like. He died in 1982 in a motorcycle crash,” Aamidor said.

His short story “Alleys,” set in Indianapolis, is fictional but has some autobiographical elements.

“The story was prompted by a visit I made to the Indianapolis Museum of Art (now Newfields) several years ago and a painting of a stark urban alley that I saw and liked very much,” Aamidor said. “It reminded me of playing stickball with friends in back alleys in Chicago, a fairly common pastime in my youth. But I go off the rails in the story in describing a shootout in a downtown Indianapolis alley – that’s all fictionalized, but I sometimes liked to walk through downtown alleys in Indianapolis and I always thought they would make great locations for a black-and-white noir film.”

Aamidor said four of the stories deal entirely or in part with Jewish themes, especially the provocatively titled “Best Jewtown Hotdogs,” which was a real place in Chicago, he said.

The novella, “In the Graveyard of Past Experience,” is about “a morally corrupt psychiatrist and how he treats his different patients, most of whom he hates, Aamidor said.

A story that was a finalist in Best American Essays of 2020 is “Diary of a Triage Patient.”

“Don’t Go” is available for pre-order from Amazon and Barnes & Noble. The publication date is set for Nov. 1.