Deputies at the Hamilton County Sheriff’s Office are now equipped with body cameras that the county’s top law enforcement officer says will bring another level of transparency and accountability to the public.

Hamilton County Sheriff Dennis Quakenbush said the cameras, which can record audio and video, will be used in a variety of situations, including traffic stops, that will also aid law enforcement with training. In addition, Quakenbush said the devices will also be used for evidence collection, criminal investigations and court proceedings in an effort to show what happened in a particular situation.

Quakenbush said the sheriff’s office took about a year to research different vendors before entering into a five-year contract with Motorola. Officials also reached out to local law enforcement agencies to see what types of body cameras they were using and eventually decided to go with Motorola after seeing how it was used in the field.

The cameras will cost the sheriff’s office approximately $453,000 for the first year, with the second through fifth years of the contract being $236,100 annually.

A large portion of the cost is attributed to storage and data, which is cloud-based, while equipment and docking stations are also part of the overall price tag, according to Quakenbush. The sheriff’s office received a grant from the state for $63,200 that will help offset the costs associated with the body cameras, he added.

Officials also tried to evaluate based on the needs of sheriff’s deputies who are responsible for patrolling 400-plus square miles in Hamilton County. Jail transport staff are also equipped with body cameras as well, he added.

“We really looked at a patrol deputy’s standpoint and a corrections officer’s standpoint of what best fit them,” Quakenbush said. “Every officer that carries a firearm will be issued a body camera.”

Quakenbush said in most instances when a person interacts with law enforcement from the sheriff’s office, the body camera system will be activated, which can be done by pushing a button inside a vehicle or on the camera itself. The camera can also be automatically activated when emergency lights are turned on inside a vehicle as well, he added.

Employees at the sheriff’s office have undergone orientation training on how to use the devices and access different settings. So far, the reception among law enforcement using the devices has been positive, and Quakenbush said the biggest benefit is bringing another level of transparency and accountability to the public.

In general, body camera audio and video footage will be considered public record, meaning members of the public will be able to access it if a public records request is filed.

However, Quakenbush said there are exceptions to that in cases where there might be sensitive information or matters involving juveniles. In those situations, information will be redacted as necessary, he said.

Lydia Fairchok, who has been a deputy with the sheriff’s office since December 2021, sees the body cameras as being an asset to law enforcement. She previously used body cameras when she worked at the Sheridan Police Department, she said.

“I think body cameras in general really make our jobs easier,” Fairchok said. “I feel it’s very good for documentation and it’s a lot easier to pay attention to a conversation with someone and get their direct quotes when you know you can reference the video after the fact, and they capture a lot of body language and emotion from people that you’re talking to.”

Fairchok said the body cameras will also provide law enforcement officers such as herself to go back and access information as needed in a particular situation.

“I think we’re definitely excited to have them and excited to see how it can give us lots of opportunities to have good interactions caught on camera and to show that we’re out here doing our job the same whether we have cameras on or not,” she said. “It definitely allows us to capture all those positive moments.” 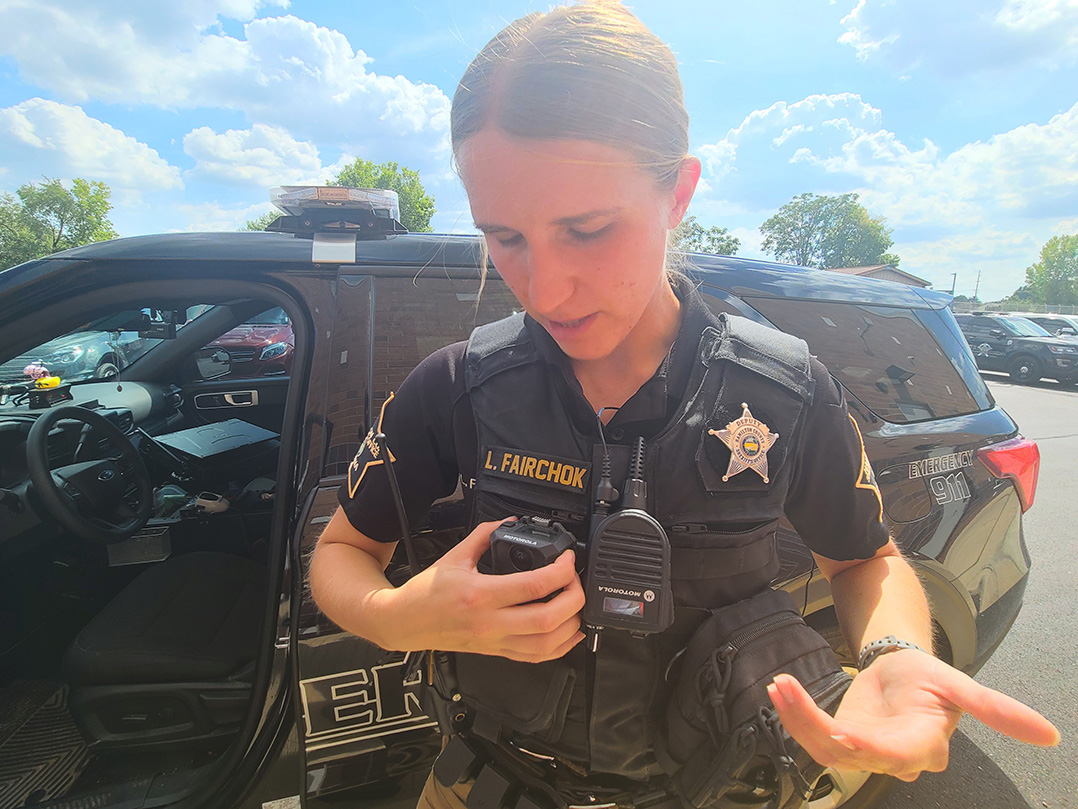 Lydia Fairchok, a deputy with the Hamilton County Sheriff’s Office, demonstrates how to use a body camera. The sheriff’s office recently rolled out body cameras to all its deputies and jail transport staff. (Photo by Matthew Kent)