A bumpy horseback ride led to Pam Faerber being diagnosed with ovarian cancer and, ultimately, might have saved her life.

In 1994, Faerber knew there was something wrong with her because she was exhausted all the time. So, she went to see a female doctor, but knew it wasn’t a productive exam.

She found out later a rectal pelvic exam is the only way a doctor can feel the ovary.

“Two weeks after that, she rode someone else’s horse because her horse was very lame,” said Faerber, who lives in Zionsville with her husband, George.

The horse was a bucker. Faerber would go around the jumps because she didn’t trust the horse.

“Finally, we came up upon an area of mud and he jumped the mud, which I was not prepared for,” Faerber said. “I did a big lurch. I later said he twisted my insides. I was kidding, but the tumor flipped completely over.”

Faeber was in so much pain she thought she was having appendicitis. Her family physician suggested a CAT scan and the tumor was seen. She then saw a gynecologic oncologist, Dr. Hans Geisler, who performed the surgery.

“We learned that when the doctor did the surgery a few days later, it basically saved my life because I was going to wait six to eight months and go to a different doctor,” Faerber said.

With September being Ovarian Cancer Awareness Month, Faerber pointed out most women have been to a doctor three or four times over a period of two years before ovarian cancer is detected.

Faerber met Nancy Hines, who also was detected during Stage 1 during chemotherapy. She got a call from Kai Binford, who thought she might have ovarian cancer and she was right.

“It’s beginning to change, but up until a year ago, a doctor could go through med school and really be taught there are no symptoms for this cancer,” Faerber said.

Faerber, Hines and Binford formed a nonprofit called Ovar’Coming Together. They started an Ovarian Cancer National Alliance, which has since merged with Ovarian Cancer Research Center.

“We produced the first brochure in the country that had symptoms on it,” Faerber said.

Faerber said there were skeptics in the medical field because many women had those symptoms on a monthly basis.

“But like me, women know this is different,” she said.

It took Dr. Barbara Goff several years to get a study to show some subtle symptoms can lead to ovarian cancer diagnosis.

Faerber said if a woman presents with those subtle symptoms, it probably is not ovarian cancer, but she should have a rectal pelvic exam and a CA 125 test (measures cancer antigen 125) in the blood. 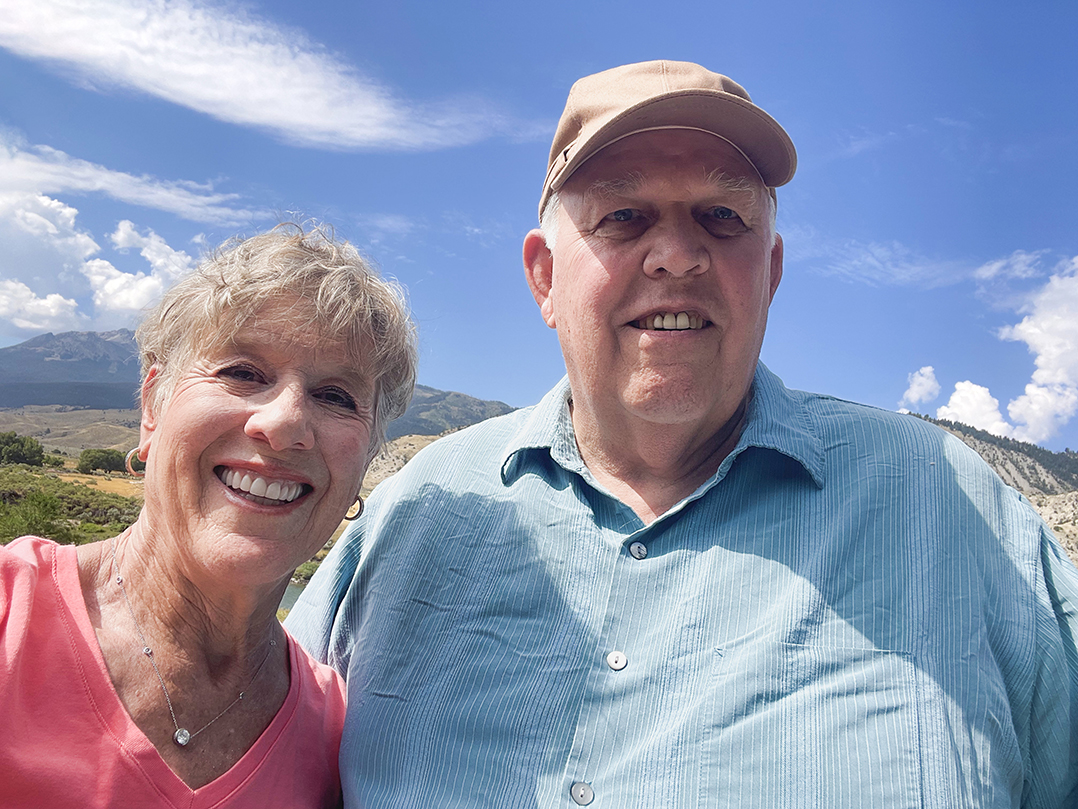 Pam and George Faerber have been married 51 years. (Photo courtesy of the Faerbers)

Supporting her mission has been her husband.

The Faerbers were high school sweethearts growing up in St. Louis. George was a sophomore starter on the 1969 Purdue University basketball team, which reached the NCAA championship game before losing to UCLA. Pam went to University of Missouri for one year and then transferred to Purdue

George was an assistant on Purdue coaching staff for eight years.

The Faerbers, who have been married 51 years, have owned Faerber’s Bee Window since 1983.

“Pam’s father had a window business in St. Louis, and he had talked to me about coming back and learning the business,” George said. “I worked for him and learned the business and worked for him for three years. Then we moved to Carmel in 1983 and started our own business.”

The couple moved to Zionsville in 1994, the same year Pam was diagnosed with cancer.

“Two years ago I named a CEO, and I’m more in a strategy role,” George said. “It’s been a fun ride. As much as basketball is loved around the state of Indiana, the visibility I was fortunate to have helped us to grow.”

When Pam and George Faerber’s son, Geoff, took his own life at age 36 in 2011, they shifted much of their focus to advocacy for depression and anxiety awareness. Geoff left behind a wife and two children in Montana.

“I realized cancer is pretty easy compared to someone who suffers from depression,” Pam said. “I didn’t recognize depression as the deathly illness it is. Geoff was never truly diagnosed. There is not a blood test or a brain scan they do.”

Pam said her son, who played basketball at Cathedral High School and Wabash College, was an amazing athlete.

“What I’ve found with many people who take their own life is they carry other people’s burdens,” Pam said.

Ginger Faerber DeCoursey won four state individual titles and was on four winning relays in from 1986-90 for Carmel High School. She went on to swim at Purdue and is now aquatics director at Azionaqua Swim Club in Zionsville. DeCoursey has six children.