You are at:Home»Current in Carmel»Carmel Community»Athlete of the Week: Carmel High School safety finds his talents on the football field, not in the pool

“I gave that up after sixth grade,” he said. “It was insane how many workouts they had every day. I honestly don’t know how my sisters do it. I hated it.” 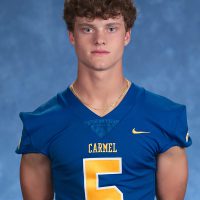 Berglund, a 6-foot-1 safety, had 91 tackles, including 60 solos, and two interceptions last season for the Greyhounds, who open the season Aug. 19 against visiting Louisville Trinity.

“He is very athletic, explosive and has great ball skills,” Greyhounds coach John Hebert said. “He used to be an outfielder in baseball, so he can really gauge the ball in the air. Winston attacks blockers with his hands very well and with a powerful punch. I would also rank him as one of the best tacklers we’ve had here in my 27 years.”

Hebert said Berglund grew into a team leader as his junior year progressed.

“He has always been a very strong competitor who gives everything he has to the team, but I noticed him frequently picking people up and bringing his teammates together,” Hebert said. “They view him as one of the most important leaders on the team. I am leaning on Winston and classmates to shape this team using all of the lessons they’ve learned over the past four years. They want to win a state championship, but I know they value impacting the younger players equally.”

Berglund said he expects to be a more complete player this season.

“Last year, I really didn’t know any techniques,” he said. “I was playing on my athleticism.”

Berglund said he gave up baseball before his junior year.

“I just knew that I loved football more and that was where my passion was,” he said.

Berglund plans to study business at Purdue but isn’t sure what aspect.

“I know I want to get involved into that area, because I have always been good at making up ideas that will sell and what people want,” he said. “I chose Purdue for the endless opportunities it has on and off the field.”

Berglund said the Boilermakers’ coaching staff is second to none with head coach Jeff Brohm, co-defensive coordinators Ron English and Mark Hagen and linebackers coach David Elson. Berglund said he built a strong relationship with them during the recruiting process.

“Then with a Purdue degree it can get you a lot of places that other places can’t,” he said. “It was a no-brainer.”

Hobbies: Hanging out with friends, watching UFC and college football