Jen Hutson had a brainstorm after reading a children’s book.

“I wanted my boys to experience the natural world and creation and interact with it,” Hutson said. “I like them to spend a lot of time outside engaging with nature. We started collecting things we found.”

Four years ago, Hutson and her oldest son, Wade, were reading one of the Boxcar Children’s books. In the story, four children spend a summer on an island, and they have an idea to make a museum of things they discovered.

“I thought, ‘Why don’t we do that and start a museum?’” Hutson said. “That’s how the idea came on and we just kept expanding.”

Hutson presented what she calls her “3 brothers museum” for the third time in the family’s Carmel home July 31. The one-day museum wasn’t held in 2020 because of the COVID-19 pandemic.

Wade, now 10, has 5-year-old twin brothers, Ty and Cody. They comprise the three brothers. Wade is starting fourth grade at Coram Deo Academy in Carmel Aug. 11 while the twins will be in kindergarten at Coram Deo.

“It’s kind of a joke that I’m wildlife control. People will call and say I found this dead animal,” Hutson said. “I have my work gloves and I sanitize everything.”

Hutson has a collection of bones and skulls. In addition, she has fossils and American Indian artifacts. The one-day museum includes a sensory station for children to touch items.

“I like making nature accessible to people,” she said.

“My family and I joke about becoming a park ranger in my next life,” she said. “Whether I’m doing it informally or formally, I continue to try to educate myself more. My oldest (son) is a prolific question asker.”

Hutson and Wade gave presentations to the museum attendees and took questions from the children. A total of 140 people visited July 31, approximately the same number as last year.

Hutson also has taken items into Coram Deo and given presentations on bones. She has contemplated visiting other schools to share her collection of fossils, skulls and bones.

“I’m passionate about getting kids to experience things they normally wouldn’t,” Hutson said.

Hutson has considered expanding her repertoire by learning taxidermy. She normally doesn’t have an issue while cleaning skulls but said she nearly got sick while preparing a coyote skull.

“It was pretty gross with the smell,” she said.

Hutson said she is convinced kids of the present generation should learn some of the lost arts, such as gardening, canning foods, woodworking or hunting and cleaning an animal.

“I think more kids should be educated on those things and understand the world around them more like older generations did, which is another reason why we do this,” she said. 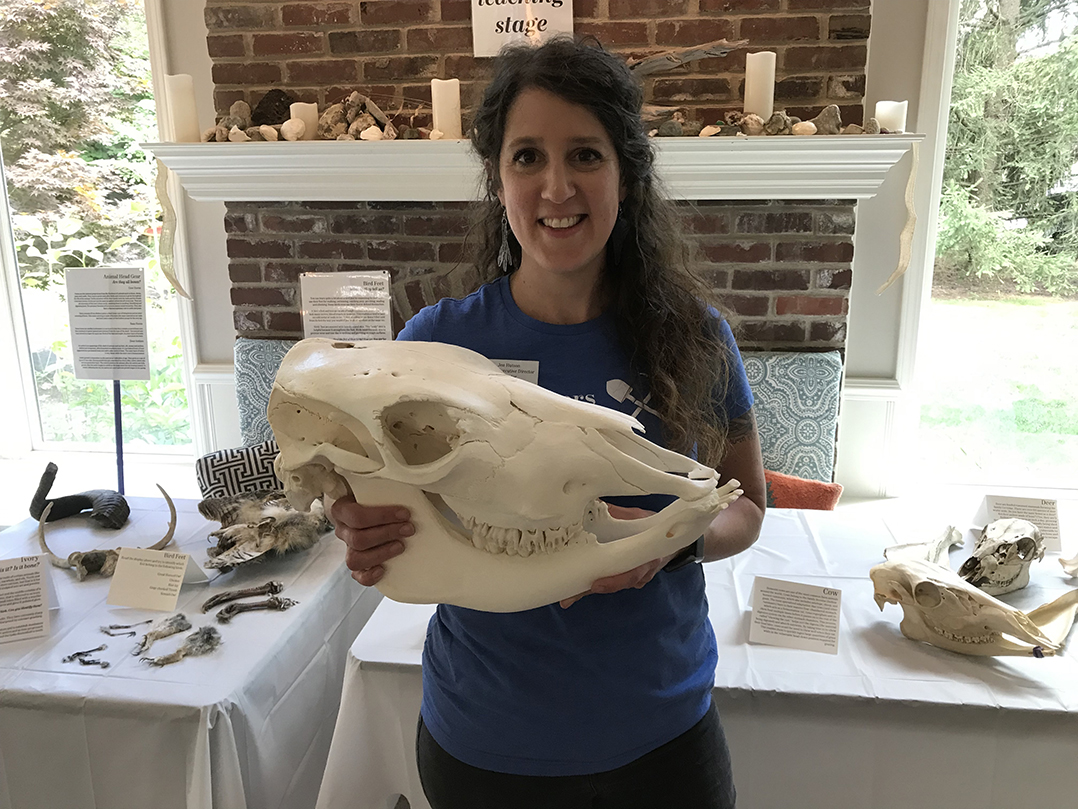 Wade Hutson said many of the “3 brothers museum” visitors are from Coram Deo as the entire school is invited.

“We’re big nature people, so we go on trips, and we get these fossils and bones,” he said. “It’s fun to see people enjoy the stuff we work hard (collecting).”

Wade said his father, Brian, is more interested in the social aspect of welcoming visitors than the museum collection itself. Brian joked that he is in the facility operations.

“The kids can see that it’s possible to be able to do something like this on your own based on what your interests are,” said Carmel resident Todd Pilcher, who has four children. “They learn a lot depending on the different topics. Some things the kids have been more interested in than others, but it’s always informative. The kids look forward to it.”

“I never seen a tree frog in my life, so that was exciting to see one,” he said.