For longtime Zionsville resident Tom Easterday, this award is special.

Easterday, 66, was recently named the 2022 Andre B. Lacy Vanguard Award recipient. The award recognizes industry leaders for extraordinary leadership and impact. Conexus Indiana presents the Vanguard Award each year to a Hoosier leader who champions the advanced manufacturing and logistics industries, models civic and philanthropic leadership and demonstrates a visionary perspective that challenges the status quo. 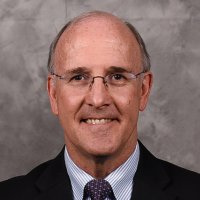 “It was a great honor for a number of reasons,” said Easterday, who retired as senior executive vice president of Subaru of Indiana Automotive at the end of 2018. “It helped not only recognize me but all the people that I have worked with at Subaru as well in the manufacturing community and philanthropic organization and charitable organizations I’ve worked for. It’s always a team effort. A lot of them were there for the ceremony, so it’s great to share that with them.”

The award is named in honor of philanthropist and business leader Andre B. Lacy, who left a large footprint on Indiana as a third-generation leader of his family business, Lacy Diversified Industries Ltd. (LDI). He died in November 2017.

“I’ve always looked up to and tried to emulate Andre Lacy and his career,” Easterday said. “He was a great business leader. He exemplified leadership in personal involvement at the civic level and certainly in the business community. He did a lot for different charitable organizations. It was a privilege to know him through his career.”

Easterday was the fifth winner of the Vanguard Award.

“Tom embodies all that the Vanguard Award recognizes – a passion for the advanced manufacturing and logistics industries and a commitment to ensuring the vitality of the industries and enriching the lives of Hoosiers,” stated Fred Cartwright, president and CEO of Conexus Indiana. “Tom has channeled his energies through both his professional career as a 30-year Subaru executive and his tenure of civic involvement with industry nonprofit organizations and community-based organizations.”

Easterday said Cartwright called him to inform him of the honor.

“I was very surprised and very honored,” Easterday said.

Easterday is a past president of the Zionsville Town Council, past board chairman of the Community Foundation of Boone County and has coached Special Olympics athletes for more than 20 years. Easterday is the president of Independent Living for Adults with Developmental/Intellectual Disabilities, which he helped create.

Besides his role of senior executive vice president, Easterday served as secretary and chief legal counsel at Subaru. He was actively involved in numerous businesses, civic and charitable organizations, serving as a past chairman of the Indiana Chamber of Commerce and the Indiana Automotive Council, and as a director of the National Association of Manufacturers and the Central Indiana Corporate Partnership. Easterday has been awarded the Sagamore of the Wabash, received the Indiana Business Leader of the Year Award and was inducted into the Indiana Manufacturers Association Hall of Fame.