Luke Shinneman saw how difficult it was for his mother, Amy Shinneman, to travel by air because many wheelchairs get damaged in transit.

Amy, who has muscular dystrophy, walks with a limp and needs a mobility device for longer distances. 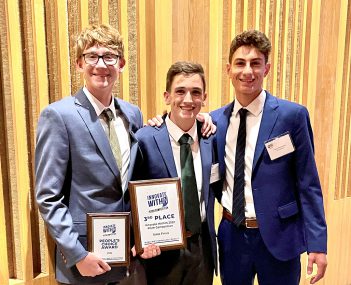 “The motivation for our Innovate WithIN project came from our capstone engineering course at Noblesville High School,” Shinneman said. “The inspiration came from wanting to help my mom who lives with a rare form of muscular dystrophy. Our success so far is hugely exciting not only for us, but for my mom and others that have deserved improvements in air travel for a very long time. We hope to be that improvement.”

The team of Shinneman, Landon Swift and Gus Nance, who graduated from NHS this spring and are headed to Purdue University to major in mechanical engineering, developed LIFTOFF Mobility to help airlines transport wheelchairs without damaging them. The project took third place in the June 10 STARTedUP Foundation’s fifth annual Innovate WithIN state competition at Butler University in Indianapolis. LIFTOFF Mobility also won the People’s Choice Award. The project also won the Region 5 pitch competition hosted by the Burton D. Morgan Center for Entrepreneurship at Purdue University.

The idea came from the amount of damage that the airline industry causes to wheelchairs each year, and the damage is one of the main reasons why individuals in the disabled community don’t travel by air. The team invented a lift that airlines can use to move wheelchairs safely on and off the aircrafts as well as padding that consumers can wrap the chairs in to further decrease damage.

“We spent weeks brainstorming our project,” Swift said. “We chose this project because we decided it was much more important of a problem, and that it would positively impact more people’s lives.”

The team was awarded seed funding to continue growing the business.

“The seed money will mainly be used to finish our patenting process and to help develop a final prototype,” Swift said. “However, we are also hoping to begin reaching out to potential manufacturing partners, and this funding could help us in that regard as well.”

The team began working on the project in August 2021.

“It started as our high school senior engineering project through our STEM program, but we didn’t plan on it becoming a business until February of 2022 when Mr. (Don) Wettrick talked about the Innovate WithIN competition to our engineering class,” Swift said.

Wettrick is the chief executive officer of the STARTedUP Foundation.

Nance said when applying for the Innovate Within competition, the group had no expectations of making it very far.

“We just saw it as a good opportunity with not much to lose,” Nance said. “We were thrilled to have made it so far and get both the People’s Choice Award as well as third place.”