“I know I like to teach,” Storen said. “I know I was lucky to have people help me throughout the years. I told Jered (I’ll coach) as long as it doesn’t take away too much from being dad and the business and then school classes.”

Storen, 34, was taking online classes toward his Stanford University degree in the spring of 202 but stopped when classes returned to in-person this fall because he would have had to move his family to California.

Storen spent more time with ZCHS this season as the Eagles reached the semistate of the IHSAA state tournament. Storen said senior leadership helped the team buy into what the coaches were teaching.

“Coach Storen was so valuable to our pitching staff this year because he not only brought years of MLB experience to our pitchers but also taught us how to be competitors on the mound and how to win,” senior pitcher Drew Dickson said. “His knowledge of pitch calling and helping us throw different pitches better was incredibly important to the success we had as a staff this year.”

Storen said he has always enjoyed the development side of teaching.

“I never been involved in the in-game (of coaching), so that was a fun challenge for me,” he said. “I feel coaching is a balancing act. It’s knowing your audience and understanding what makes a guy click. Teaching is lot of little things, but you have to let them play. They asked questions, they wanted to learn, and I saw them make adjustments.”

“I joke with my wife, it’s one of the worst episodes of ‘Undercover Boss’ you’ve ever seen,” he said. “The way we do it is, the kid gets four pitches from the coach before they go to the tee. I would go out and pitch and almost had a couple perfect innings where the kid didn’t have to use the tee.”

Storen, a 2007 Brownsburg High School graduate, lived in downtown Indianapolis during his playing days. When Jace was born, the family moved to Carmel.

“That was our starter home and now we’re starting the building process in Zionsville,” said Storen, who also has a 2-year-old son, Pierce, with his wife, Brittani, a pharmacy major. “We’ve been designing and working on the house for well over a year now.”

Storen was an architecture major at Stanford but left after his junior year when he was drafted by Washington with the 10th pick in the first round.

“I designed things I wanted to be in the house and handed it off to the pro,” Storen said. “I had my hand in it more than a normal client would. I also know my limitations.” 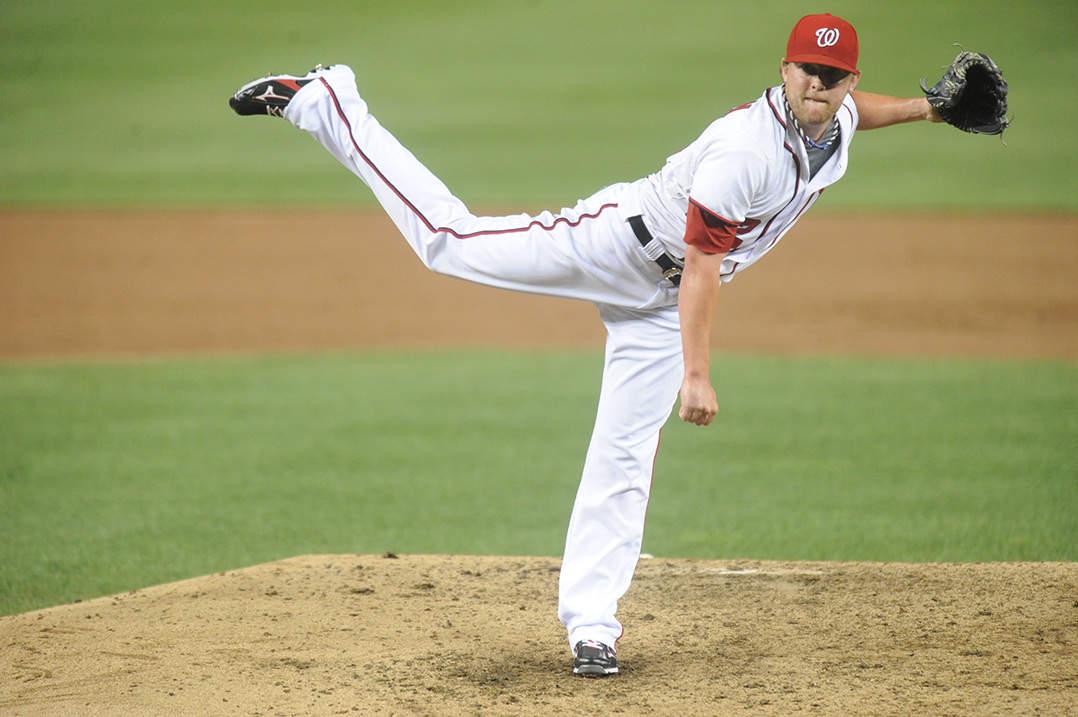 “Looking back, it’s more than I could of ever dreamed of,” he said of his career.

Storen had an ulner collateral ligament reconstruction – better known as Tommy John surgery — on his right elbow after pitching with Cincinnati in 2017 and sat out all of 2018.

“There is a big difference rehabbing under a team control and rehabbing on your own,” Storen said. “I had blisters issues and it didn’t work out with Kansas City (in 2019). I pitched well with Philadelphia in spring training (in 2020) when COVID hit. That changed all the roster construction and they released (me). I kept training but I knew my heart wasn’t really in it anymore. I have to be all in. From a pitching side of things, I wasn’t nearly as good as I used to be and that’s not fun. I’d always tell people I was never great about playing baseball as a business. I was good about playing for the right reasons.

“It was a job, but I never treated it like one. It was getting to the point it started to feel like a job.”

A Field of Dreams whiskey mission

Drew Storen said he always told people he would be done playing in the majors when he had an answer for what he wanted to do.

He came up with the idea about six years ago to create a Field of Dreams whiskey.

“I luckily get to mesh some of my favorite things,” Storen said. “Baseball, (and) I was always collected bourbon, and storytelling. It’s kind of a perfect storm with the new project. Our goal is to get it out by the (Field of Dreams) game (Aug. 11), and then we’ll have bottle releases for next year. The unique factor of what our brand is versus other ones is our ingredient is the brand. We don’t have the luxury of going to a big distillery and using some of their juices and put our own label on it. We are taking every kernel of corn from the movie site in Iowa.”

One of Storen’s partners is former Washington Nationals teammate Tyler Clippard. He also expects former Brownsburg teammate and White Sox pitcher Lance Lynn to be involved, along with other former MLB teammates. Storen is in charge of getting it off the ground.

Storen said he first began discussing the idea for Field of Dreams whiskey with Andy Keller, a friend from Brownsburg High School, who helped Storen build his bourbon collection.

“We were on a road trip (and) we were talking about the different bottles we found,” he said. “I said, ‘I find I’m paying for stories and that’s what a lot of bourbon is.’ We were spit-balling ideas that if we made our own bourbon, what story would it tell? That’s when I came up with the main ingredient in whiskey is corn. What is the most famous cornfield in the world, Field of Dreams. We saw a parallel of whiskey numbers with baseball numbers and tell stories for the baseball fan. I never had anyone say it’s a stupid idea and it’s never going to work.”