The City of Lawrence is spending a portion of its American Rescue Plan Act funds for a hidden but necessary project.

The city is using $2.05 million of its $11.2 million in ARPA funds and along with funds from a $2.05 million State Water Infrastructure Fund grant to begin improvements as soon as this year.

“The rehabilitation will focus on (water) mains, manholes and lateral connections to that system, focusing in the old part of town here because this is where we have had the largest amount of problems and infiltrations,” Salsbery said.

Infiltration occurs when clear water, such as rainwater or ground water, seeps into the sanitary sewer through cracked pipes or malfunction parts. The clear water can lead to surcharges and contributes to the system overflowing.

Salsbery said storm sewer infrastructure in the old part of Lawrence was installed 60 years ago.

“They are made of vitrified clay pipe that is old, and over time it breaks down and deteriorates and the joints come apart and develop cracks,” Salsbery said.

The issues can cause problems such as sinkholes.

“A lot of groundwater and rainwater gets in the system, but what also happens is a major pipe failure if it gets bad enough,” Salsbery said. “It will collapse and we have experienced that. You could have a whole street with no sewer service. The other problem is when you have a collapse in the street. Water percolates down through the ground and brings fine soil particles with it, and it gets in the sewer and creates a void and you end up with a sinkhole or a collapse in the street.”

Sinkholes can appear without warning. To fix the problem, construction workers excavate the area, fix the defect and backfill it, then patch the street with asphalt.

A construction date hasn’t been determined, but Salsbery expects the project to be complete before the end of the fall. There will be road restrictions throughout the project but not many, if any, full road closures.

Salsbery said without the ARPA dollars, the city’s sanitary sewer system wouldn’t be improved this soon. He cited funding issues because of the sewer rate, which hasn’t increased since 2009.

Sewer rates are a monthly fee of $26.60 that includes the first 4,300 gallons used. After that, the rate increases by $6.19 per 1,000 gallons. Salsbery said the sewer rate will likely increase, although it’s uncertain by how much.

Lawrence recently went through a similar process with water rates in 2017. Water rates hadn’t been adjusted since 2003. The phased increase led to a 94 percent increase in water rates, the final phase of which went into effect in January 2020.

“A few months later, we were then going to introduce a sewer rate proposal to get in front of (the city) council, but then the pandemic happened,” Salsbery said.

Salsbery expects sewer rates to increase similarly to water rates. The Utility Service Board hadn’t made a decision on the process as of press time.

“The bottom line is, we have to have a sewer rate increase with the financial trajectory we’re in right now,” Salsbery said. “If we don’t adjust rates this year, next year there will be zero improvements. There will literally be no sewer capital money.”

Without a rate adjustment, the trend could lead to complications when the city applies for bond funding.

“If your utilities are sound and in good shape, they are a valuable asset for the city because they provide the collateral for bonding purposes,” Salsbery said. 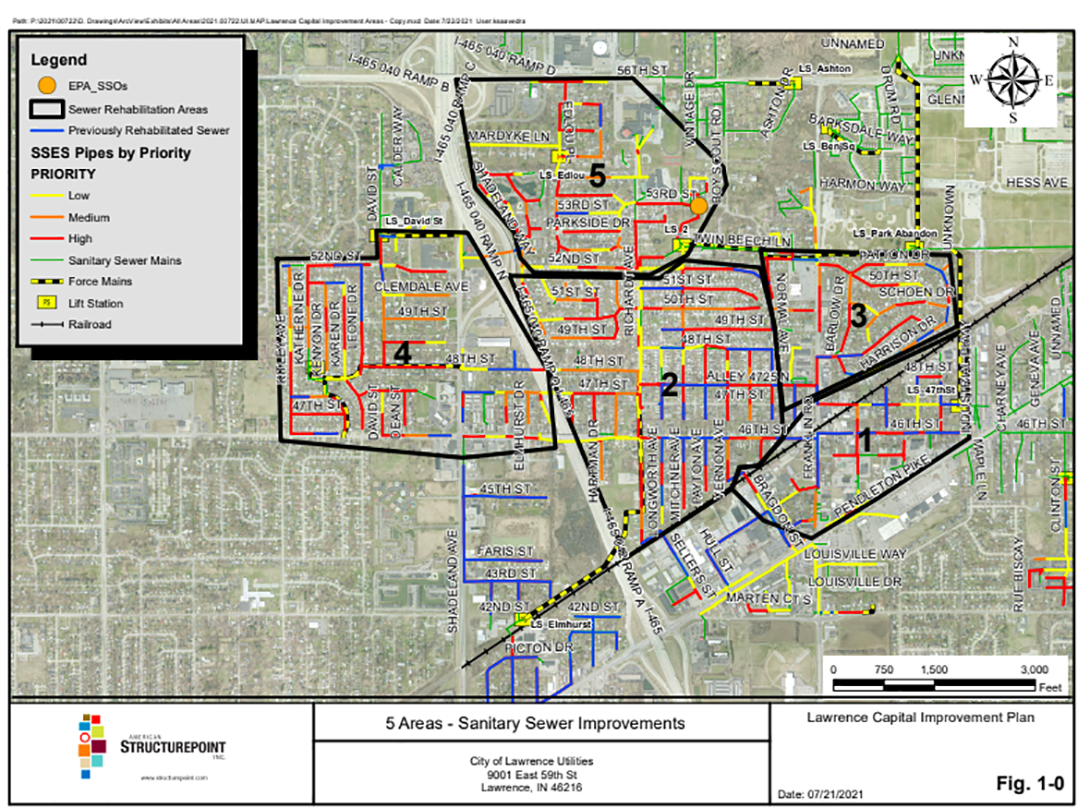 A map of proposed sanitary sewer improvements. (Image courtesy of City of Lawrence)

When the American Rescue Plan Act was passed, the City of Lawrence wasn’t set to receive any of the funds.

“We were never recognized as a city at the federal level. We were recognized as part of Marion County,” Lawrence Mayor Steve Collier said.

“If your (population) is above 20,000, you’re considered non-entitled,” Collier said.

The designation qualified Lawrence to receive ARPA funds. Lawrence was awarded $11.2 million in ARPA funds, half of which it has already received. It will receive the other half next year.