The City of Westfield is in the process of establishing a Grand Park Request for Proposals Review Committee. 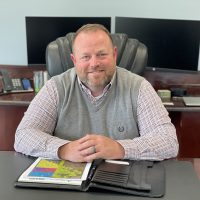 The committee will consist of five appointments made by Mayor Andy Cook and will include a recommended Westfield City Council nominee. Appointments will consist of Westfield residents and stakeholders. Chief of Staff Jeremy Lollar will be a nonvoting member representing city administration.

The Westfield Redevelopment Commission issued a request for proposals, or RFP, March 3 to sell Grand Park or enter into a public-private partnership. June 22 is the deadline for proposals.

Lollar said because of the possibility of a public-private partnership, state statute requires a review committee be established.

“We could be partnering with a private entity to operate, lease or some other mechanism of operating Grand Park,” Lollar said. “Effectively, the committee will be reviewing any proposals we receive for a (public-private partnership), or if we receive proposals to outright purchase the park, they will review those as well.

“At the end of the process, they will make a recommendation to the council and (Westfield Redevelopment Commission) to review.”

Lollar said the review process complies with state statute for a public-private partnership for the operation of Grand Park or for a sale.

“In fact, it goes beyond what statute requires to ensure that the proposals are fully vetted by experienced and capable individuals, who are also city residents and stakeholders. We are confident that the review committee will yield the best possible recommendations for the RDC’s and city council’s consideration,” Lollar said.

The Westfield City Council has the option not to choose the review committee’s recommendation and select an alternate route. Recommendations cannot move forward without council approval.

Lollar said he expects the review process to take “an extensive period of time.”

“Once we have received proposals by the deadline of June 22, that will set the course for the review committee and really the next steps of the timeline,” Lollar said. “So, there will be, I imagine, a couple months’ worth of review of proposals. These are going to be in-depth documents folks are submitting, and likewise, there will be a due diligence period as the review committee works with proposers, meets with them individually, talks about the proposals and asks questions prior to any recommendation being made. Then, if there is a recommendation, that would go before the appropriate bodies.

Lollar expects a final list of Grand Park RFP Review Committee members to be made public this week. As of press time, all appointment letters had not been issued.