Matt and Erin Uber have never been so thankful for their large family, or their community of neighbors and friends who have become like family, as they have in the last year.

Some of them helped respond when the Carmel couple’s youngest daughter, Vera, suddenly collapsed from a cardiac arrest at age 4 on April 25, 2021, and all of them have stepped up to be prepared to potentially save her life if it happens again.

After the cardiac arrest, Vera, now 5 and back in preschool, was diagnosed with calmodulinopathy, a rare arrhythmia syndrome caused by a gene mutation, and chances are that her heart will someday stop beating again. She has a defibrillator implanted in her abdomen to provide immediate lifesaving measures, and – in case that doesn’t work – an army of people in her life refreshing their CPR and AED skills.

“If you think long enough on Vera, it will terrify you. Clinically, there is likely a future arrest. We’ve protected her the best that we’re able to. We’ve been compliant in every recommendation, yet still we could be living our lives just waiting for the next shoe to drop, and after that shoe drops, it could just keep dropping,” Erin said. “Having our vibrant extended family and community allows us the support, but also the distraction, of loving her with the people we love.”

Exactly one year after Vera’s cardiac arrest, approximately 50 people with ties to the Uber family gathered at Carmel United Methodist Church for a refresher course from Carmel Fire Dept. firefighter Brent Schnepp, who responded to Vera’s emergency. The Ubers plan to mark “Vera’s Heart Day” in a similar fashion every year, but they’re also partnering with the Carmel Fire Dept. with the hope that sharing their story on a larger scale will encourage others in the community to stay up to date on their CPR and AED skills.

“This is Step 1 in trying to do a little bit of extra training so we’re all a little more ready, a little more competent if something  happens to your child or your friend’s child or a stranger walking down the street,” Matt Uber told those gathered at CUMC. “You can jump in and give somebody the gift of more time and love and life.” 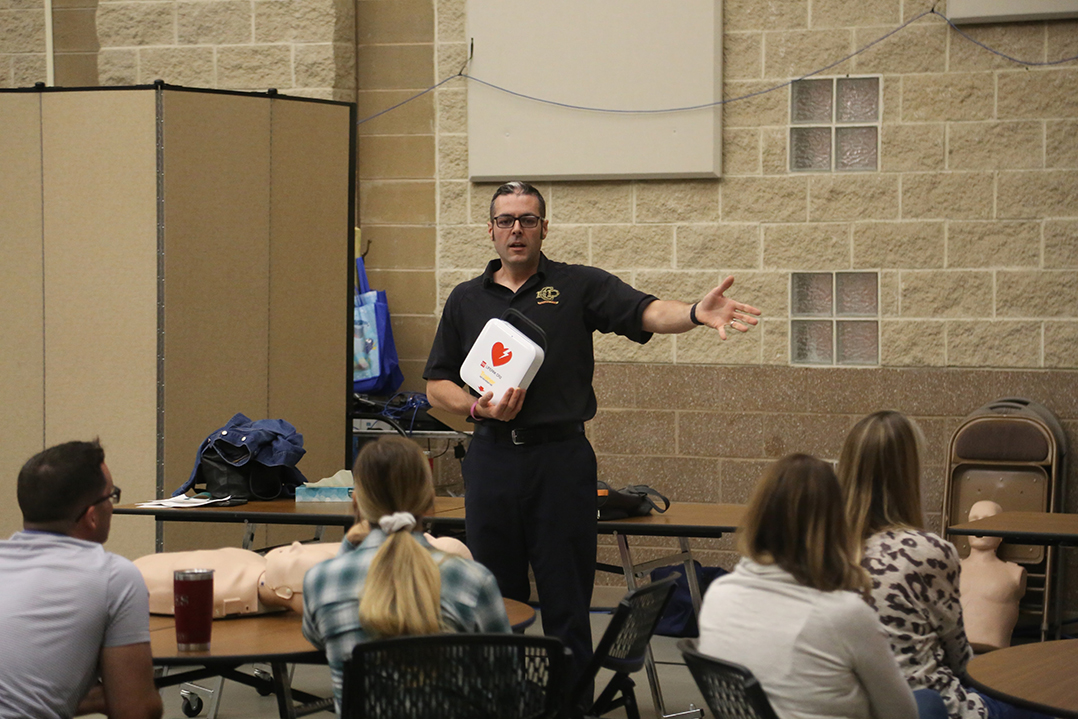 For Vera, an outgoing and confident child who loves dogs and building with Legos, it was her father’s quick actions that gave her another chance at life.

The two had been playing tag in their kitchen after a busy day when Matt heard a thud and found Vera lifeless on the floor. Thinking she had likely smacked her head hard enough to pass out, he soon realized she wasn’t breathing. He yelled for his older daughter, Nora, to call 911 as he began doing CPR, which he remembered how to do because of a scene in an episode of “The Office” he had recently watched.

First responders soon arrived, bringing Vera back to consciousness upon a second shock from an AED. They rushed her to Riley Hospital for Children, where doctors told the family it appeared she did not suffer any permanent damage as a result of the cardiac arrest. That’s not often the case, as up to 90 percent of people whose heart stops die before reaching the hospital, and many of those who do survive experience brain or nervous system injuries, according to the Centers for Disease Control and Prevention.

“Getting her to Riley was the miracle,” Matt said. “Her blood still moving, the oxygen moving and her being revived on our kitchen floor is what made Riley’s next wonderful steps possible, and it was really unlikely that was going to happen.”

As Vera recovered, the Ubers soon realized that, because less than 80 cases of calmodulinopathy cases have been reported worldwide (and many of those discovered post-mortem),  chances are slim that enough research will be done to find a cure or better treatment. So, they made the decision to implement the defibrillator – which will be relocated within her body as she grows – and do everything they can to ensure those in Vera’s circle and beyond know how to respond if her heart stops again.

Those efforts began the day Vera returned home from the hospital, as several neighbors gathered to learn CPR from Schnepp. Many of those same neighbors returned for the refresher course at CUMC.

Kyle Monk, who hosted the initial CPR training in her home and is required to know how to perform it because of her occupation, said she’s made sure her children know how to respond during a cardiac emergency.

“When we did (the training) at our house, my girls were there,” she said. “We tried to get all the kids involved, because they’re the ones out playing with (the Uber children).”

Vera’s three older sisters, who range from 11 to 20 years old, have also become proficient in CPR and AED usage and are passionate about encouraging others to learn how to save lives, too. Nora, a junior at Carmel High School, recently worked with CFD to create a video sharing her family’s story and information on how to perform CPR and use an AED. CHS played the video April 22 for its 5,300 students.

“It’s so simple. It takes maybe 10 minutes to refresh your (CPR and AED skills) and educate yourself on it,” Nora said. “It really does change the course of a lot of people’s lives.”

CFD plans to repeatedly share the 10-minute video featuring the Uber’s story on the big screen in Midtown Plaza during an event – likely in late May – that will also include an opportunity for community members to learn CPR and practice on dummies. Watch the video at youtube.com/watch?v=_FSS2SpwI2g. 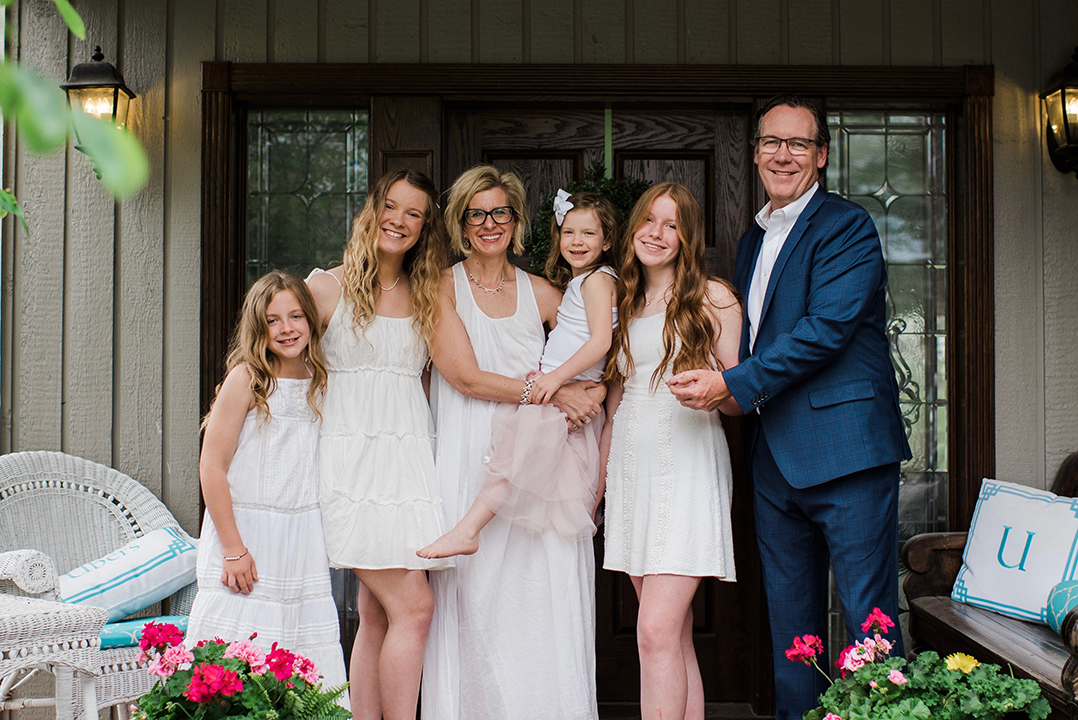 So much has changed for the Ubers in the past year. But at the same time, they’re thankful for how much has stayed the same.

Now that Vera has an internal defibrillator, her family has an AED that travels with them everywhere and her caregivers have the skills to respond to another cardiac arrest, life has largely returned to normal, albeit with some restrictions on physical activity. Vera’s parents are thankful the cardiac arrest happened when she was young enough to always be near a caregiver and before it might have led to more drastic life changes.

“She wasn’t 8 (years old) and had begun to love basketball and soccer,” Matt said. “We didn’t have to take that from her.”

Easter, which fell a little more than a week before the first anniversary of Vera’s cardiac arrest, held special significance for the Ubers this year. As they sat in church, listening to a story of the Resurrection, they reflected through tears on how their own daughter “came back to life.”

“It never occurred to us until sitting in Easter services last weekend just how close resurrection and resuscitation are,” Erin said at the April 25 event. “She was gone, and then she was not.” 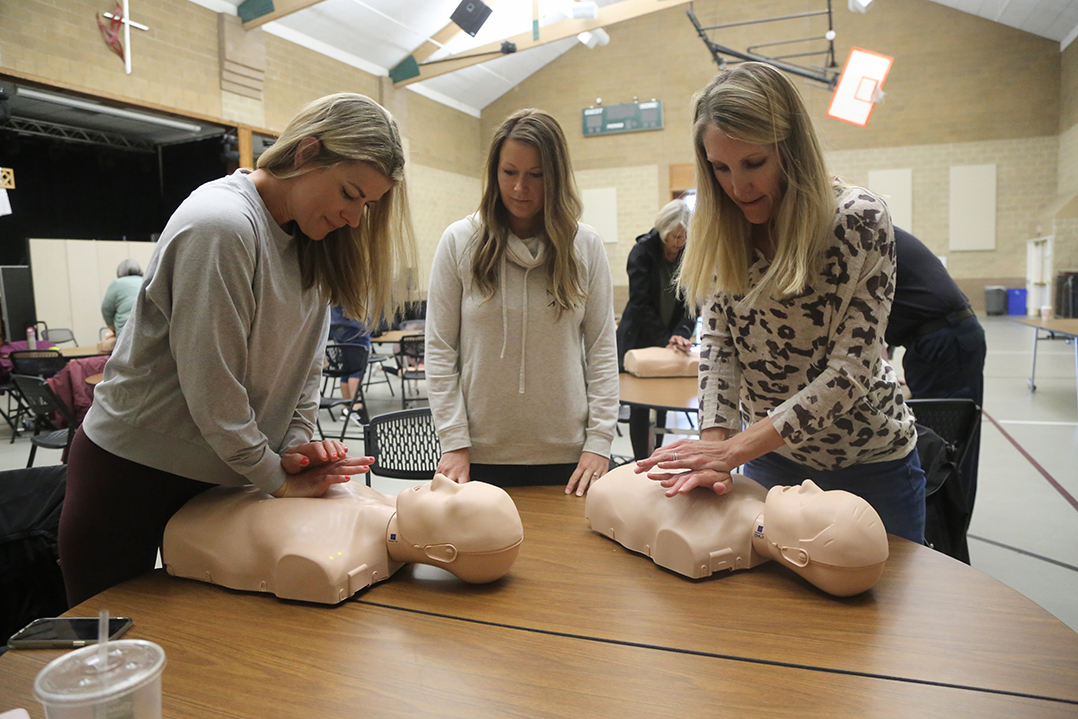 AEDs coming to the Monon Greenway

Approximately the same time as Vera Uber’s cardiac arrest, the City of Carmel assembled a task force to determine if and how AEDs could be placed along the Monon Greenway and in Carmel’s parks. The initiative came at the request of Jeff Utzinger, a Carmel resident who suffered a cardiac arrest while jogging in 2017 and was resuscitated with CPR from a passerby and an AED in a police vehicle.

After a year of planning, the city plans to unveil its first Monon Greenway SAVE station, which will include an AED and a Stop the Bleed kit to quickly treat traumatic injuries, in late May. Other SAVE stations are set to be added along the Monon at Main Street, Carter Green and near the intersection with Gradle Drive.

“All of those places are great examples of areas where large groups gather, and that’s why we picked those locations first,” said Carmel City Councilor Jeff Worrell, a member of the task force. “We felt like, should there be an emergency, we’d have the largest group of people that could possibly need an AED, but also a very visible location so anyone using the Monon, even if they’re 100 yards up the trail, might remember there’s an AED (nearby).”

Worrell said the task force would also like to eventually have AEDs placed near the north and south ends of the Monon in Carmel and in every Carmel park.

The SAVE towers, which will be temperature controlled for the sensitive equipment inside, will alert first responders when they are activated. They will also include information about Pulse Point, an app that provides information on where users can find the nearest AED at any given time.

The AEDs were provided by Be Like Bill, a nonprofit founded by Utzinger and named in honor of the man who performed CPR on him; Bolt for the Heart, a nonprofit that aims to place AEDs in law enforcement vehicles; and a donation from Lindner Learning Center, founded by Vera’s grandmother. The SAVE towers are funded through donations and the City of Carmel.