When Erika Schneider’s dog died, her daughter surprised her grieving mother with a Mastador puppy named Hoss. Schneider said she didn’t want another dog at the time and was determined not to bond with the new puppy – a Mastiff Labrador mix.

But that quickly changed.

Sixteen months later, Hoss is now Schneider’s certified psychiatric service dog. Hoss spends each day at the Lawrence Police Dept., where Schneider is a captain. Hoss’s services have been used by LPD officers and by police departments across the state.

“Their handler/owner has to have the medical condition for them to be a service dog psychiatric dog,” Schneider said. “There’s a lot of law enforcement that have PTSD or anxiety. Most people that know dogs know that dogs in general can provide comfort, which can help stimulate people and calm people. Hoss can provide that companionship to all the other officers.”

Hoss is trained to provide emotional support to someone who is struggling with anxiety or if a panic attack is coming. He applies therapeutic pressure on the person’s chest. Besides her role as LPD’s professional standards division commander, Schneider is part of an honor guard team and the Indiana State FOP Critical Incident/Memorial Team.

“So, anytime there is a law enforcement active-duty death, we travel, or our team does, and we go and plan and assist agencies in the planning of funeral services,” Schneider said. “Hoss also goes. He actually ends up probably being the biggest component for law enforcement there.”

LPD Chief Gary Woodruff said 16-month-old Hoss is a major benefit to LPD. Hoss originally came to the department each day as Schneider’s personal service dog, but Woodruff noticed the benefit to other officers or families of fallen officers.

“Having a dog like that around is a benefit for everybody, especially with Capt. Schneider’s duties at the Indiana State Memorial Team,” Woodruff said. “It is certainly a value added, and it’s another avenue that might assist with a grieving family in their worst imaginable moments they can go through.”

Hoss accompanies Schneider to the office each day. She said officers visit and play with him when they need to.

“He definitely will know when someone is having stress,” she said. “One of the first line-of-duty deaths we went on, I had an individual come up to me and asked if she could spend time with Hoss. She sat right down on the floor and Hoss went immediately to her and sat next to her and laid his head on her shoulder. She sat there and wept and cried and cried and cried, and that was enough for her.”

In another interaction, an individual was speaking to Schneider and Hoss wouldn’t leave her side.

“She was trying to leave, and Hoss kept going back to her and she was calling to me like, ‘Ericka, what’s wrong with Hoss?’ I was afraid to let people know what he did because people would become self-conscious and worried something was wrong with them. But I said he was indicating to her that something was bothering her and when I told her that, she said, ‘How did he know? I’ve had the most horrible day today and I’m under so much stress right now.’ She was able to cry and let loose, and for her, that was a sense of relief for her.”

Schneider, who lives in Fishers, is in her 24th year at LPD. 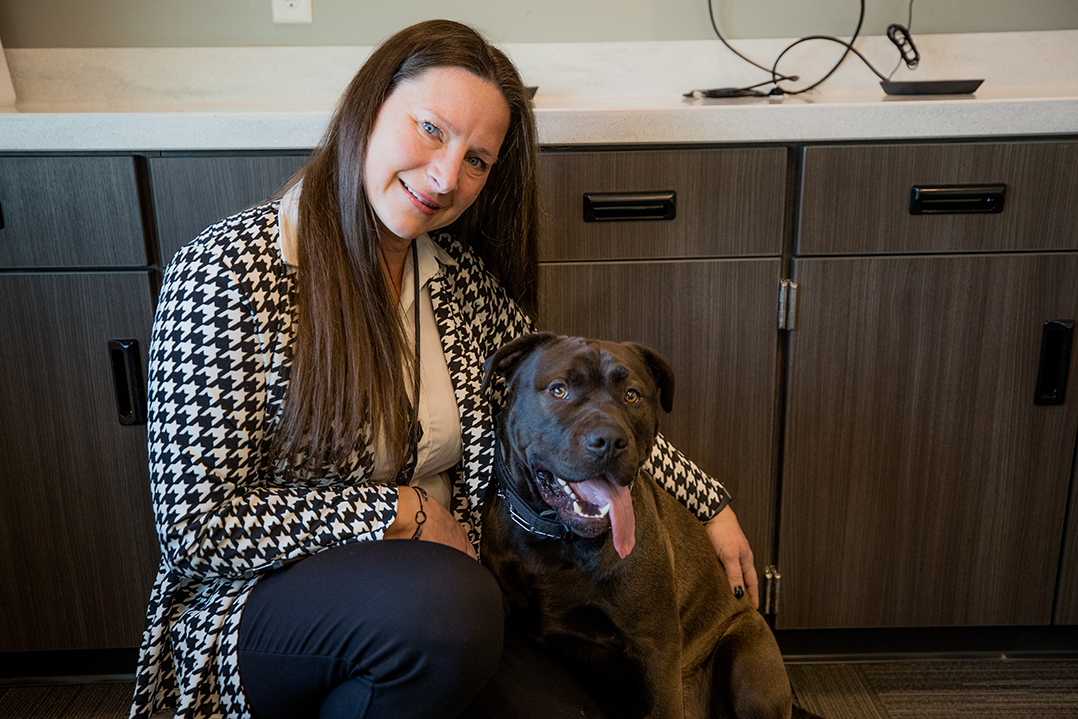 Her psychiatric service dog Hoss helps provide an avenue for that.

“Instead of allowing us to suppress, (Hoss) allows us to feel. No matter what that feeling is, whether it’s a feeling of joy or happiness or love or companionship, he allows us to feel,” Schneider said. “It’s OK for any human being to be happy or sad with an animal versus reality. They don’t judge. Hoss provides that security blanket. I can act like a juvenile and talk like a baby to a dog and not be judged by it. When we’re talking about grown policemen or women, you’re not judged when you can roll around on the floor with a dog and just forget about what’s going on around you or forget about the domestic violence you were just on or someone that just died or someone that just got shot.”