You are at:Home»Current in Noblesville»Noblesville Cover Stories»Speaking up: Sexual assault survivor shares story, advice to teens and parents in honor of Teen Dating Violence Awareness Month

When Tess Calvert participated in sexual assault education through school, the awareness guidance often portrayed abusers as strangers. But that wasn’t her experience when she was sexually assaulted by someone close to her.

“I was probably 13 when I was sexually assaulted for roughly a year,” the now 18-year-old Noblesville resident said. “I was 13, and he was a couple years older. There was a lot of manipulation. It wasn’t a very consensual relationship.”

Calvert said she and her abuser, who she refused to name, weren’t dating. She called it a friendship that turned into a dictatorship.

“He isolated me, and he became my world,” she said. “He made it to where I felt like I was alone and didn’t have a lot of friends and my family were against me. I feel like, as a kid, you don’t really see a lot of what you should look out for. So, I was really unaware. I saw an older guy who kind of cared for me and it felt nice.”

Calvert and her abuser were in a park when a police officer caught him attempting a sexual assault. Calvert went through the court process, where she began working with Prevail, a Noblesville-based nonprofit that provides crisis intervention and restorative support services for victims of crime and abuse. 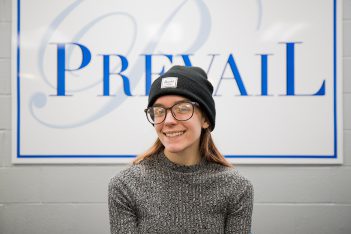 Tess Calvert is part of the Prevail Speaker’s Bureau. (Photo by Rachel Greenberg)

“The effects of violence cause pervasive physical, mental and/or emotional health problems throughout the rest of (the) survivor’s lives. Being connected to a victim advocate provides a lifeline,” Prevail Director of Mission Achievement Brittany Winebar said. “Advocates are specially trained to provide survivor-centered, trauma-informed care unique to survivors. Our services address a range of issues that survivors must negotiate, such as safety, understanding their rights, housing, the legal system, physical and mental health needs, financial support and many more.

“Prevail is here to walk alongside, help connect and support survivors.”

“The court process was really hard, but Prevail really helped me through that,” she said. “I was fortunate enough that I received justice on my case. Statistics weren’t very high for people who receive justice on their cases, in America, at least.”

Calvert’s abuser was sentenced to four years in jail and probation.

During the legal process, Prevail helped Calvert prepare by walking her through what to expect. She met with the prosecutor several times before court, and she said Prevail helped her feel represented and like her voice would be heard in the courtroom.

Calvert also worked with Prevail outside the courtroom and participated in peer groups, where she took part in a sexual abuse support group, a healthy relationship support group and a support group in partnership with Agape Therapeutic Riding Center.

Calvert no longer participates in support groups through Prevail. Now, she is part of the Prevail Speaker’s Bureau, where she shares her story to raise awareness.

Calvert said she parents and schools should do a better job educating pre-teens before they date.

Calvert encourages teen victims of dating violence to not be silent.

“Usually, having an outsider’s eyes is really beneficial rather than being driven by emotion,” she said. “I’d also say that if it doesn’t feel right, if you just have a small gut feeling or if they’re telling you not to tell someone something, that’s a really big red flag that’s not talked about.

Calvert said their voices can help their own situation and others’. She also encourages parents to listen to their children and watch for signs of victimization.

“Don’t get mad when they don’t listen to you,” Calvert said. “If you’re dating someone, you have feelings for them. It’s not going to be easy to walk away. I don’t think people understand that. Just have patience and love and support.”

Calvert plans to attend IUPUI to major in human biology and health sciences. Her career goal is to become an emergency room physician.