You are at:Home»Current in Westfield»Westfield Business Local»Rail plans to reopen in Westfield

A favored Westfield restaurant recently announced it plans to reopen later this year in a new location. Rail, a breakfast and lunch restaurant, was previously located in a red barn on Park Street in downtown Westfield. It closed in late 2020, claiming COVID-19 restrictions were too tough to overcome.

“First things first, we have missed you all so much! Secondly, we are beyond excited to announce that we are reopening Rail!! Like many of you, there has been a hole in our hearts since closing the big red barn. It was our passion and we are looking forward to reigniting that culinary flame in this awesome new location at the corner of SR 32 & Grassy Branch (by Ace Hardware).” 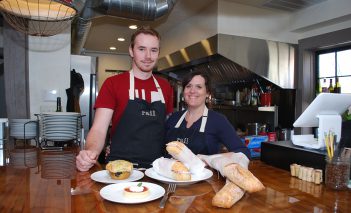 The post exclaims there is plenty of parking in front of the new location. The post also stated that an opening date would be announced later this year. Toby Miles said hesitantly, he hopes the restaurant will open in late summer, but he said that was a “big maybe” due to supply chian issues.

Toby Miles said Rail will reopen as a breakfast and lunch restaurant in space that is roughly four times the size of its previous location on Park Street. Half of the restaurant will be used as a local grocer with grab-and-go or take-and-bake items. It will sell liquor, beer and wine.

“When we closed, like any restaurant after the pandemic, we didn’t want to close but it was the grown-up decision we had to make. For our mental health, we had to let something go,” Toby Miles said. “But we never really let the name die. The barn was cool but it was what was inside of it. It was the people that made Rail, and we can transport that anywhere between any four walls. We can make it work and have that same atmosphere.”

Rail originally opened in 2014. The Mileses also own Cone + Crumb, an ice cream and dessert shop on Park Street, which Toby Miles said plans to reopen in March. Cone + Crumb is temporarily closed during winter.