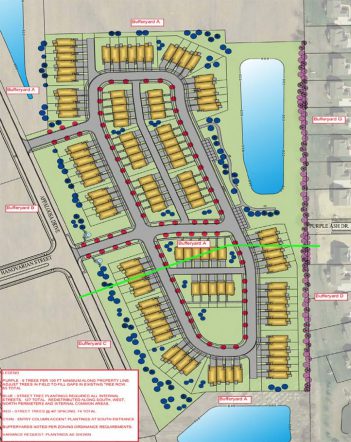 In a 4-0 vote during its Dec. 6 meeting, the Zionsville Town Council approved an ordinance to modify a commitment concerning the Appaloosa Crossing development plan. The ordinance concerned the central 18 acres of the development and revised development plans for 22 total buildings containing 113 total units within the acreage, among other revisions.

Council members were given a presentation concerning the central 18 acres of the Appaloosa Crossing development, a conjoined 54-acre, 264,000-square-foot retail and office development which will include shopping, dining opportunities and medical services, according to developers. The development is east of U.S. 421 and south of East 300 South/146th Street.

The ordinance concerned the central 18 acres of the development and revised development plans for 22 total buildings containing 113 total units within the acreage, among other revisions, which the council unanimously approved.

Project developer Pulte Homes of Indiana LLC and its legal representatives worked with the Zionsville Plan Commission to revise plans for the housing area.

“We arrived at the number of 113 (townhomes) after several plan revisions as we worked through the plan commission process,” said Matt Price, Pulte Homes’ legal representative.

After a public hearing on the development in August, the plan commission formed a special study committee to continue revisions to the developer’s proposal. Revisions included reducing the number of housing units by eight, adding 74 additional street trees and enhancing the buffer package on all sides of the property so that the development would surpass ordinance buffering standards, Price said. Additionally, all internal housing units were revised to be rear-loaded, three-story buildings. Buildings on the outer perimeter will be two-stories. The plan commission certified the proposal to amend the commitments to the town council with a unanimous favorable recommendation on Nov. 16.

The Appaloosa Crossing property was first rezoned in 2008, when developers initially envisioned a Kroger store as the development’s “power center,” Price said.

“As the Marsh bankruptcy unfolded and as Kroger made its response in the marketplace to that, along with other changes in market conditions, the development concept has evolved,” Price said. “In the past several years, we have periodically revisited the commitments that govern the property to modernize them and really respond to the marketplace, and this is the latest iteration of one of those opportunities to revisit a specific commitment.”

Price said the development’s 113 townhomes should not significantly affect the school district.

“Zionsville updated its demographic analysis back in 2018 (for its) schools, and what they conclude is that a single-family home generates just slightly (more) than one-half a child per unit, and you have less than half of that for townhomes based on historical data and their projections” Price said. “So, it has a significantly lesser impact on schools than the permitted single-family homes by half.”

Town council member Craig Melton said he supported the development because he liked having the buffer of residential units between commercial development and existing residential homes.