Ask Rosalie Hurst her age, you won’t get a numerical reply. You’ll get a declaration.

“I am 84 years old and going strong,” said Hurst, whose age belies an active lifestyle someone decades younger might have a tough time keeping pace with. 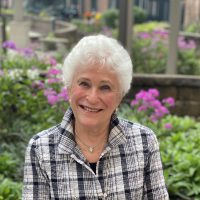 Rosalie Hurst, chairman of the board of the N.K. Hurst Co., has lived at Marquette Manor in Indianapolis for two years. (Photo courtesy of Rosalie Hurst)

Oh, and one other thing.

Hurst is chairman of the board of the N.K. Hurst Co., one of the leading packagers of dried beans in the United States. The company was founded in 1938 by Hurst’s late father-in-law, Needham King Hurst, distributing coffee, tea and sugar. The Hurst family started the bean business in 1947 in a building near what became the site of Lucas Oil Stadium but now operates in a more modern facility in Zionsville.

“It is a wonderful place,” said Rosalie, whose terrace apartment overlooks the front lawn and lake. “There is not enough time to do everything that is offered here. I hope some day to join the knitting and craft classes as well as the current events group. There are always many opportunities to volunteer in various events.”

A Fort Wayne native, Rosalie spent most of her summers at Lake Wawasee, enjoying boating, water skiing, sailing, riding wave runners, turtle hunting and fishing. She earned a bachelor’s degree in education at Indiana University, where she met her future husband, Bill. The couple married three weeks after graduation and were together for 55 1/2 years.

Although life took her in a new direction after Bill’s passing, Rosalie is still enjoying the ride and has no plans to hit the brakes.

“I am a homemaker, a wife, a mother, a grandmother, a volunteer and a friend,” she said. “As far as retiring, I don’t plan to.”