Gregory Hancock was looking for an authentic artwork representing India for his autobiographical piece, which pertains on his journey to India. 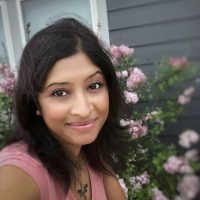 So, who better to turn to than his friend Madhuchhanda Mandal, an India native and Carmel resident?

The original artwork of India created by Mandal has been transformed into the theatrical backdrop for Gregory Hancock Dance Theatre’s “There’s No Place Like Home,” which will be presented Oct. 28 to 30 at The Tarkington at the Center for the Performing Arts in Carmel.

Hancock briefed her on the storyline behind the production a couple of months ago.

“What triggers his interest in commissioning the piece to me was the fact that I am of India origin and my roots would render some authenticity,” Mandal said. “I’m quite familiar with the art forms that prevail in India.”

Mandal, who is known by her nickname of Madhu, said a type of collage seemed best suited for the piece.

“It’s what you would see if someone took the different elements of India and put them in the form of a mural,” Mandal said.

Mandal said it was satisfying to do the piece.

“First off, I got to put together something I was so familiar with the first half of my life,” she said. “I have been deeply associated with the different art forms. I was trained as a dancer. I was involved with a drama company. I was doing the fine arts. The piece was extremely fulfilling because I could incorporate a lot of things I’ve been a part of, and not just (as) a passive witness. I get to show off my roots because it’s so colorful, and India is colorful in its most colorful form.”

Mandal earned her bachelor’s and master’s degrees in India.

“I learned different kinds of art but decided to focus in fine arts,” Mandal said. “I moved to New York for my graduate school studies when I was 25 years old.”

Mandal, a neuroscientist who is married with two sons, moved to Indiana seven years ago, spending the first year in Zionsville before moving to Carmel. She grew up in Kolkata, India, before she moved to the United States 16 years ago.

Besides being a full-time clinical trials analyst, Mandal is the owner and proprietor of Amber Grains Art Studio, where she spends countless hours creating her artworks and teaching art to students.