Nicole Lewis was teaching her art students about recycling when she stumbled upon her business venture, Art 2 the Extreme. It was 2007, and Lewis was an art teacher in Lebanon at the time.

“It was Earth Day, and we were doing texture units, so I was teaching kindergarten students about recycling,” said Lewis, a 36-year-old Noblesville resident. “I remembered melting crayons in wax cups with my mom in an oven when I was little.”

Lewis took all the broken crayon pieces from her classroom and melted them.

Now, more than a decade later, Lewis has quit her full-time job as a teacher and makes crayons in her home. Etsy, an e-commerce company focused on handmade or vintage items and craft supplies, identified Lewis as the first person to sell and create a homemade crayon online, and now she fills more than 20,000 orders a year. 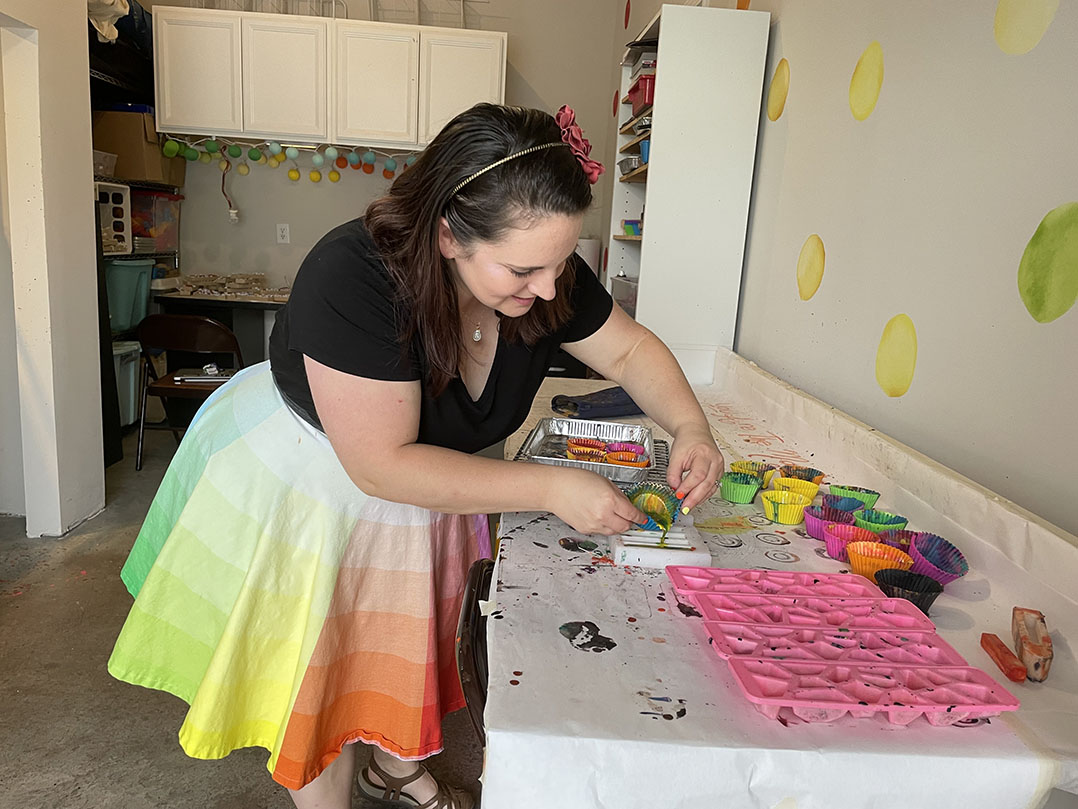 Nicole Lewis pours wax into a mold in her Noblesville home. (Photos by Anna Skinner)

In the beginning, the only silicone molds she could find were circles and hearts.

“So, the circle crayon was born. At the same time, Etsy.com was a new platform and my mom told me about it and said, ‘Open up a shop,’” Lewis said.

Lewis opened a shop on Etsy and featured her ceramics, pottery and other art items. She began listing the circle-shaped crayons, which had a rainbow of colors because they consisted of different crayons.

“I was the first person to sell and create a homemade crayon online,” she said. “Etsy confirmed that, and I started using it. It was the home of the first homemade rainbow crayon.”

Lewis’ products grew to 10 crayon shapes and then 20. Now, she has more than 600 shapes and sizes for molds.

“Art 2 the Extreme and the Original Rainbow Crayon started as a hobby and evolved into a side hustle,” Lewis said. “It started gaining momentum five years in.”

In 2012, Lewis decided to only offer the crayon items on her Etsy shop. When she did that, her sales doubled in a month and continued to grow. In 2014, Lewis made crayon creation her full-time job. She lived in Fishers at the time with her husband, Eric Lewis, and their infant son, William.

“I was working out of a laundry room with one toaster oven, and it spread to the kitchen counter,” Lewis said. “We needed a new space.”

Art 2 the Extreme’s most popular item is name crayons, which consist of a box with crayons shaped in letters spelling out a child’s name. Name crayon boxes begin at $19.95 for up to four letters and increase by $2 per letter.

Lewis began creating her own molds when the Oprah Winfrey Network called and requested a special mold for one of the shows it was producing.

“When the Oprah Winfrey Network calls, you figure it out, you know?” Lewis said.

The Lewis family moved to Noblesville in July 2020 when they again outgrew their space. By that time, Eric Lewis had left his job as a school principal and started assisting Lewis with her crayon production.

“Working from home allows both Nicole and I to do something that showcases our strengths while being completely present for our children,” Eric Lewis said. “Furthermore, the ability to create our own schedule and learn from one another is a great perk. Would I have guessed this is what I would be doing at this point in my life? No, but it has certainly worked out and been a blast thus far.”

The Lewis family bought a house in Noblesville with a three-car garage. They added a wall in the garage to create what they call “the meltery,” where the crayons are made. It has a special air-filtration system and two ovens. They also use the home’s basement for design and storage space. Because of the pandemic, last year was the company’s biggest year in sales. Lewis said orders were made to celebrate birthdays, Easter, Valentine’s Day, Christmas and other special occasions.

“(Orders) kept coming and coming and coming,” she said. “It was great for us. We are so blessed and fortunate to have that income come in and to make that move to relocate to a bigger space and accommodate proper ventilation and proper studio space.”

The couple has two children, William, 6, and Connor, 4.

“I like coming up with creative projects for our kids. I am an art teacher at heart,” Lewis said. “I miss teaching, I miss the classroom, but I don’t miss the politics of teaching.”

Art 2 the Extreme is considering hiring employees within the next two years.

“We need to have another holiday season to see how things go,” Lewis said. 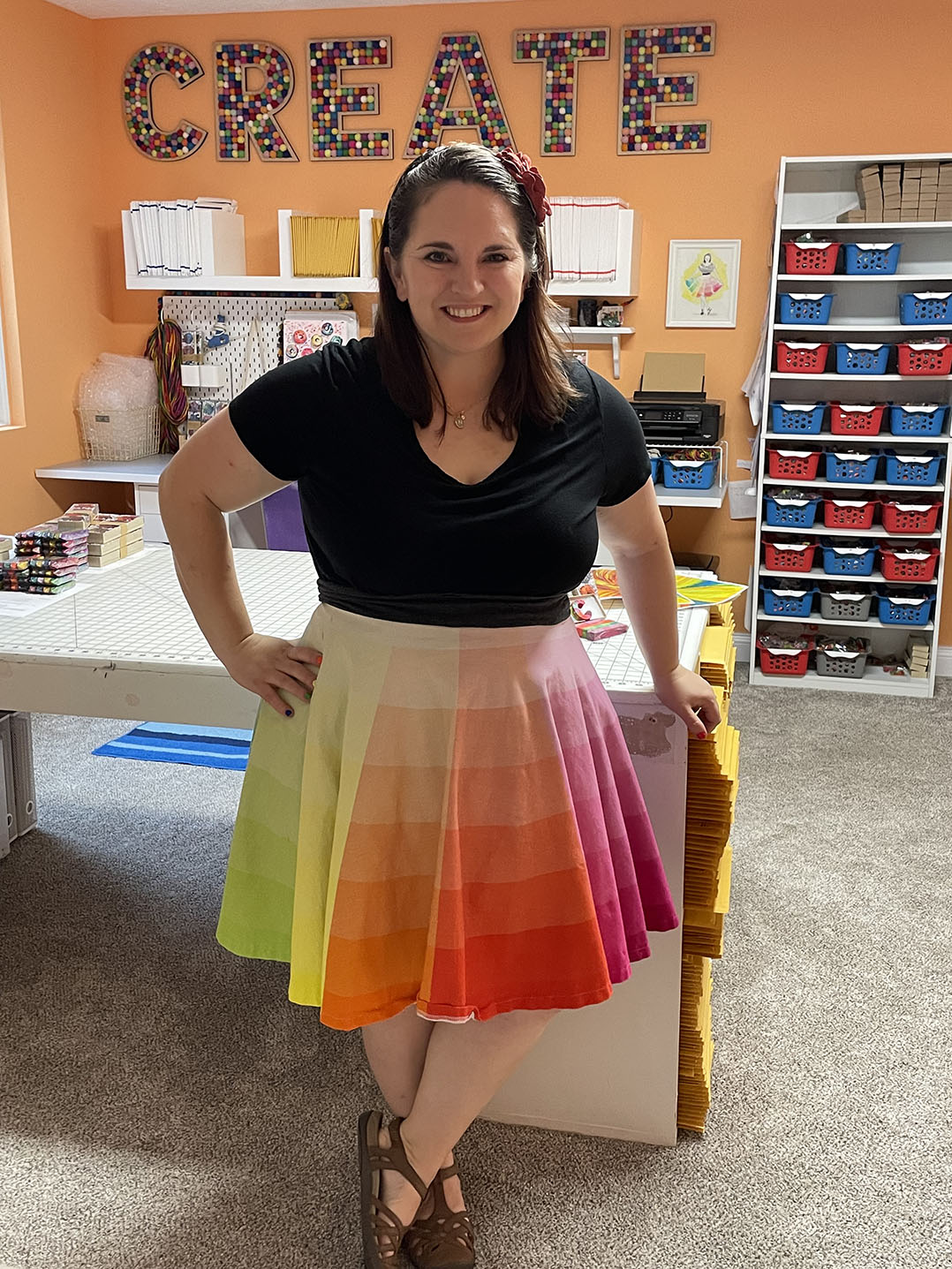 Nicole Lewis pauses in her home studio in Noblesville.

Keeping crayons out of landfills

“They repurpose crayons and give them to underserved communities and students lacking art education and art supplies,” Lewis said.

“I really try not to waste any product here or any crayons,” Lewis said.

Sometimes, Lewis uses recycled crayons in her work, but mostly she redirects the used crayons to Crayon Collection.