The wait was especially long because she was supposed to make the debut in March 2020 when rehearsals stopped a week before the “Don Giovanni” performances were shut down because of the COVID-19 pandemic. 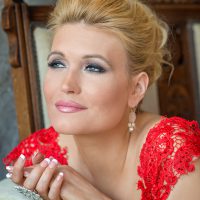 Chambers will appear as Donna Anna in the Indianapolis Opera’s production of “Don Giovanni” Nov. 5-7 at The Tarkington at the Center for the Performing Arts in Carmel.

When the production was shut down, Chambers said Indianapolis Opera General Director David Starkey said he would try to bring everyone back together when it was possible.

“It’s really heroic in a way that David did find a way after all this time and all we’ve been through to bring our cast back together,” she said. “It was incredibly special after 19 months of separation and 19 months of disaster that killed our culture, killed people we love, we’re finally back to communicating this incredible opera.”

Chambers performed concerts during the summer, but this will be her first live theater role since the pandemic began.

“One of the reasons I’m super excited to be doing ‘Don Giovanni’ is my husband (Keith) will be conducting the opera,” Chambers said. “We don’t often get to work together. While I’m prejudiced, he’s one of the most brilliant conductors I’ve ever worked with. He keeps everyone, orchestra and singers, seamless together, which is not easy to do in Mozart. He makes us feel secure so we can lose ourselves in the story while he manages the details.”

In the opera, Donna Anna’s father was killed by a masked man.

“Throughout the opera she is consumed with grief and finding the killer of her father and avenging his death,” Chambers said. “My father died during the pandemic, so it’s going to be a much more real and meaningful debut in that character for me. He had been sick with something, and we really don’t know what it was. I wish I didn’t know what it felt like, but certainly if you experience something your character is experiencing, you know better how to play that character.”