You are at:Home»Current in Westfield»Westfield Community»Westfield council members express concern with Courtyards at Spring Mill proposal

The Westfield City Council on Oct. 11 discussed two residential proposals: Courtyards at Spring Mill, an empty-nester community, and Towne Run, a mixed-use development with townhomes and commercial uses. The council did not vote on either proposal at the meeting. 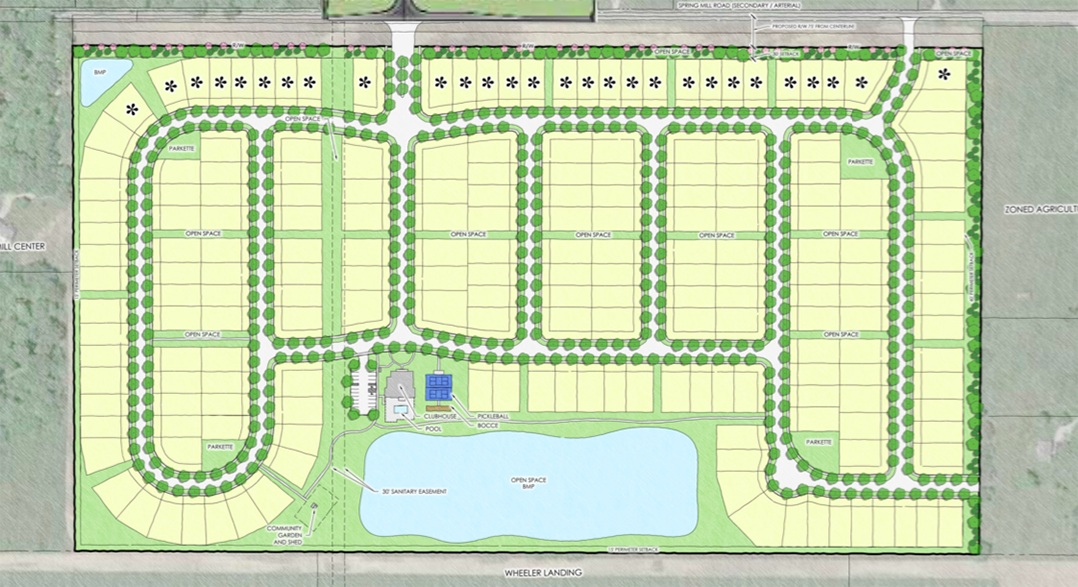 The concept plan for the proposed Courtyards at Spring Mill.

The Courtyards at Spring Mill is proposed on 68 acres east of Spring Mill Road between Ind. 32 and 186th Street. It targets the retirement community and consists of 198 single-family, empty-nester homes. The homes are expected to range from $350,000 to $550,000.

Council member Scott Frei was one of several councilors to express concern about the proposal.

“Westfield is very busy right now and growing very quickly, that’s no secret. For me to support something, it’s going to have to far and away meet more than the minimum expectations,” Frei said. “I’ve reached the point where something needs to be phenomenal to vote for another subdivision of 198 homes.”

Council member Cindy Spoljaric also had concerns about the proposed number of homes.

“It’s getting inundated up there, and the infrastructure needs to catch up,” Spoljaric said. “The idea of approving another 200 homes in that same vicinity is disturbing to me. They’re really packed in there. It’s not a product that’s unique.”

Jon Dobosiewicz, a land use professional with Nelson and Frankenberger presenting on behalf of the petitioner, asked the council to provide information where they would like to see more open space or where they thought the project was too dense, and once that was provided, the petitioner would work through those issues. The council did not provide the information at the meeting.

Towne Run is proposed on 27 acres at the northwest corner of Towne Road and 146th Street. It is proposed to include retail, restaurants, office and townhome uses, as well as accompanying amenities. The townhomes would consist of attached, three-story owner-occupied residents. The lifestyle amenities hub in the center of the development would include water features, park benches and trails.

Council member Scott Willis asked if the project would utilize tax increment financing dollars. Attorney Matt Skelton, who spoke on behalf of the petitioner, said although that was part of the original proposal, using TIF dollars was no longer part of the discussion. Councilors did not provide additional feedback on the proposal.