You are at:Home»Current in Carmel»Carmel Business Local»Swim Hair aims to promote beauty, safety in the water

As a child, Renada Harris loved swimming so much that she thought of herself as a “little mermaid.”

But the joy she felt in the water was tarnished when she noticed how it damaged her hair, and using a swim cap only made matters worse because of the teasing it inspired. Soon, she didn’t even want to go near the pool.

“As I grew older, I had a mandatory swimming class, and I would try at all costs to avoid that,” Harris said.

Harris knew she wasn’t alone in her predicament, and that gave her an idea. She got to work developing a product that combines a traditional swim cap with a wig, thus allowing users to enjoy spending time in the water without worrying about its impact on their natural hair.

Swim Hair formed as a company in 2017 and its patented product became available in July. Customers can select a swim cap that matches their skin tone and select from a variety of hairstyles and colors to customize their product. Each wig is made completely from human hair.

Harris, an Indianapolis resident, said Swim Hair is ideal for anyone who doesn’t want to get their hair wet, including those with dyed hair or perms, or for people who have suffered hair loss. It can be used at the beach or pool, in the shower and nearly anywhere else water is present.

“It’s a revolutionary way to help protect your hair from getting wet or damaged during aquatic activities while looking fabulous at the same time,” Harris said.

When Harris came up with the idea for Swim Hair, she knew it wouldn’t be easy to make the product a reality.

A native of Gary, Harris said she grew up in poverty in a community rife with violence. She said it wasn’t a place that fostered an entrepreneurial spirit.

“When you have an idea or invention that you want to share with the world, it’s very difficult to do that because of a lack of resources and a lack of funding,” she said.

The road to her dream became even rockier in winter 2017 when the furnace in the home she rented with her husband and three young daughters stopped working, and her landlord didn’t have the finances available to fix it. So, the young family moved to Indianapolis to live with Harris’ sister until they could find a way to get back on their feet.

But for Harris, who was in her last semester at Purdue University Northwest in Hammond, that meant a five-hour round trip commute to class so she could finish her sociology degree — with her daughters in tow. The older two were enrolled in a daycare in Gary, but the youngest — who was 1 year old at the time — had to go to class with her mother.

“It was very difficult,” Harris said. “It was so hard, but I had my mind and my faith on the prize, and I stuck it out.”

Harris persevered and earned her college degree in 2018. Now she is working as a credit solutions advisor for Bank of America in Greenwood. Through it all, she also continued to pursue her entrepreneurial dream. 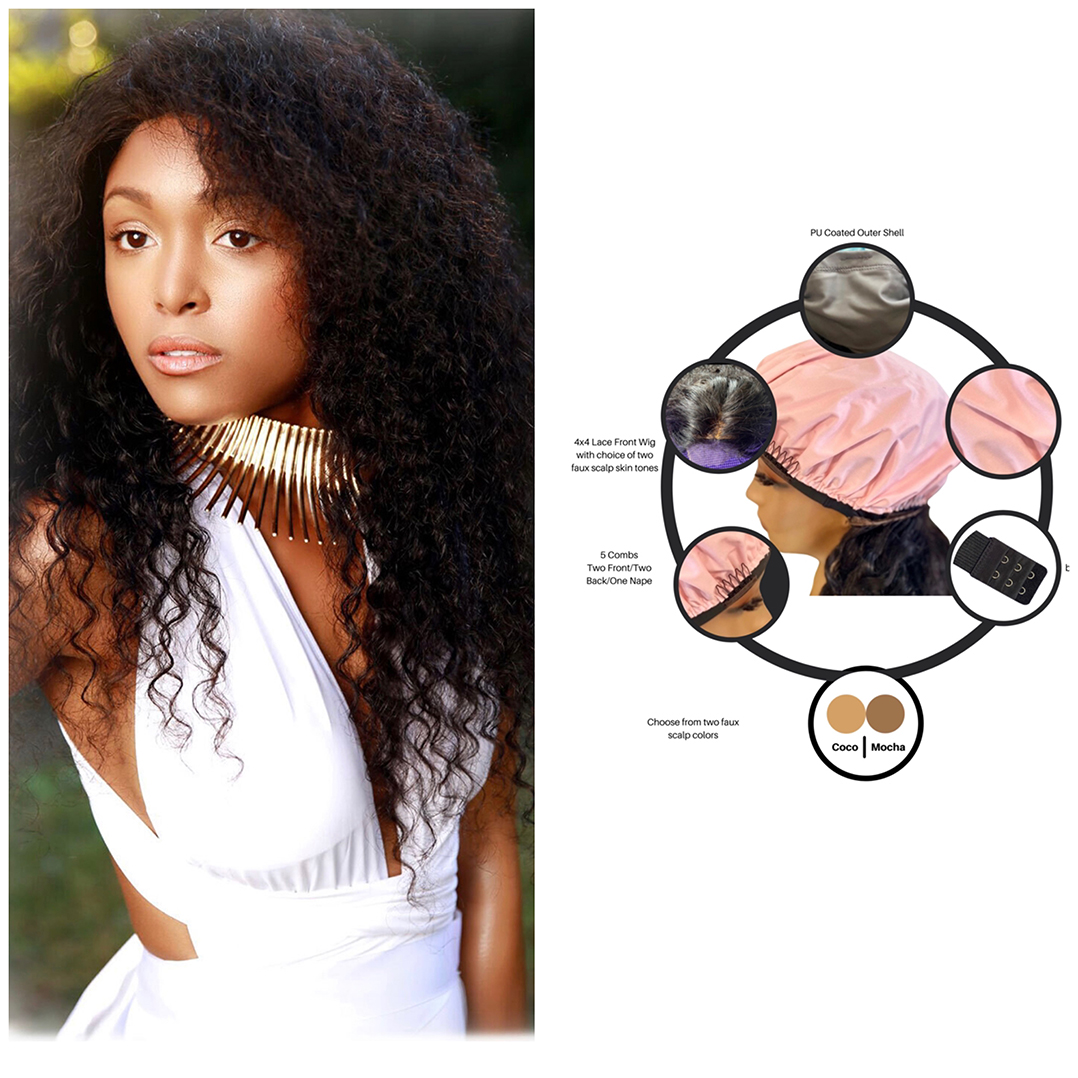 Swim Hair combines a swim cap with a wig made of human hair. (Photo courtesy of Renada Harris)

‘Back in the water’

Not long after moving to Indianapolis, a mutual friend introduced Harris to Kiahna Davis, who had successfully launched a business of her own. Harris pitched Swim Hair to Davis, and although she liked the idea, she was unable to become involved with the product at the time.

Approximately two years later the women reconnected when Davis, a Carmel resident who founded and owns an accounting firm, was a customer at the bank where Harris worked. They decided to meet again to discuss Swim Hair, and this time Davis jumped on board, becoming the company’s chief financial and operating officer.

“I appreciate (Harris’) positive outlook, and that’s what I think it takes to be an entrepreneur. You’ve got to believe in yourself and the thing you’re selling, and she really embodies that,” Davis said. “As for the product itself, who would’ve thought? It seems simple: you put a wig with a swim cap. Both of those things exist individually, but to put them together to solve one of the most pressing issues and barriers that prevent a lot of curly girls from going swimming, for me that seems simply genius.”

Harris said she hopes Swim Hair will encourage more people — especially in the Black community — to embrace the water and learn to swim. Drowning rates of Black children age 5 through 18 are “significantly higher” than white or Hispanic children, according to a 2014 study by the Centers for Disease Control and Prevention. A 2017 study by USA Swimming also reported that Black children are much less likely to be able to swim than white or Hispanic children.

“I’m here to raise awareness of the fundamental life skill of swimming,” Harris said. “Learning to swim is a life-changing event that can save your life and others. People in my culture are drowning at an alarming rate, and it stems (in part) from fear and anxiety associated with getting their hair wet. The reviews I’m getting are people are getting back in the water, and that’s what it’s all about.”