Physical activity has always been fun for Jamey Clark.

“Sports are my thing,” she said. “I’ve always done them and stayed active.” 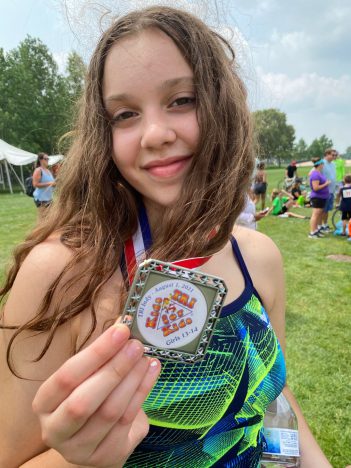 Jamey Clark displays a medal she earned through Kids TRI for Kids. The Carmel High School freshman has completed 35 of the triathlons for kids. (Photo courtesy of Mary Clark)

The Carmel High School freshman has competed in several sports, but she always found time for triathlons.

Jamey, 14, has completed 35 Kids TRI for Kids, a competition that combines running, biking and swimming. She completed her final one Aug. 29 as she will be too old next summer for the event, which is designed for ages 7-14. Jamey might have completed even more had the 2020 season not been canceled because of the COVID-19 pandemic, and only four were offered this year.

“I liked them because they involved different events,” Jamey said. “There was swimming, and I was on the Carmel Swim Club. I like biking and running, using different muscle groups. I like biking the best.”

Jamey was the Kids TRI for Kids series champion at ages 8, 10 and 12. Her best finishes in 2021 were second and third place. Kids TRI for Kids founder Meg Osborne said she believes Jamey has completed more events than any other participant.

Always there to support her is her grandmother, Mary Clark, who has raised her. Jamey’s mother, Cheryl, died at age 26 when Jamey was 25 months old.

“She is good at everything,” Mary said. “At age 3, she was swimming like a fish and diving off the diving board. She learned to ride a two-wheel bike without training wheels at age 3.”

Mary, 70, and her second husband, Bill Freed, officially adopted Jamey in 2015. Freed died in 2017 at age 91. Jamey also is supported by Jim Clark, her biological grandfather.

Jamey said she still plans to do other triathlons and likely help at Kids TRI for Kids events as a volunteer. Jamey also had success in her age group in the Carmel Sprint Triathlon.

“I got burned out because there were practices every single day,” she said.

Besides triathlons, the one sport Jamey has stuck with is softball. She played in a Noblesville recreation league for several years and plans to try out for the CHS softball team.

Jamey, who is 5-foot-10, played on the seventh- and eighth-grade basketball teams for Clay Middle School, but she is unsure whether she will try out as a freshman. Her grandmother is prodding her to give basketball another try in high school.

Jamey competed in cross country as a Clay eighth grader, earning the Most Improved Runner award.

She competed in taekwondo for a number of years and was a gold medalist in black belt sparring in her age and weight category at the USA Taekwondo Championships in Richmond, Va., in 2016. She gave up taekwondo in 2017. She competed in gymnastics for five years.

Being active all the time is important to Jamey, who has been a Girl Scout for several years.

“I like the big events, like spending the night at the Indianapolis Motor Speedway with all my friends,” she said.