You are at:Home»Current in Geist»Geist Cover Stories»Games on: Indiana SNR specializes in high school sports webcasts

Most Indiana high school broadcasts are dependent on advertisers.

Although it does have advertisers, Indiana SRN – the state’s largest webcaster of high school sports – is primarily funded by school subscriptions and donations.

“I tell our schools there are two ways to fund this. You can fund it directly out of your budget, or you can raise money on your own,” Indiana SRN President Jerry Collins said. “We’ll take your advertisers and we’ll put them on. Most other competitors rely on (pizza shops) and car dealerships and those types of things.”

The advantage is if the school raises more in advertising dollars or donations than the subscription cost, it can keep the difference, Collins said.

Keith Meyers, a Lawrence resident, is the founder and vice president of Lawrence-based Indiana SRN, which is 13 years old.

SRN initially stood for Sports Radio Network, but the main focus now is webcasting, so Meyers said the company only uses the initials. This is the fourth year SRN is doing webcasts.

“People want to watch it more than listen to it,” Meyers said. “We still have probably 25 percent of our games on internet radio with schools such as Frontier and Traders Point. We average four football games on Friday nights.”

Then there are several broadcasts per week of soccer and volleyball games Monday through Thursday and Saturday in the fall.

Meyers said SRN’s main sports are football and basketball but noted the company does webcasts for nearly all high school sports. It will add college football this fall when SRN begins webcasting Heartland Collegiate Athletic Conference football’s Game of the Week on Oct. 2.

“Those four schools are our mainstays, but we’re everywhere,” said Meyers, adding some schools hire the network for particular games.

Meyers said he serves as announcer on at least three webcasts a week.

“Keith takes care of scheduling,” Collins said. “He hires and trains the announcers. He takes care of contacts with the schools, and he’s our sales guy. I maintain the website, do the graphics, mentor the production crews and take care of accounting and the billing.”

Meyers said there are 26 independent broadcasters that work with SRN. Meyers estimates six have been with SRN five years or more. Among the announcers are Jimmy Cook, a producer with Dan Dakich’s radio show on WFNI, and WIBC reporter Kurt Darling.

“Bill Ludlow has been with me since Day 1,” Meyers said of the current Mt. Vernon broadcaster who’s called high school sports for more than a decade.

Besides the games being on SRN, Meyers said most schools put the webcasts on their website as well.

“Our slogan is, ‘We love to put kids on TV so grandma can watch Junior,’” Meyers said.

“We’ve reached over a million people over the last three years,” Meyers said. 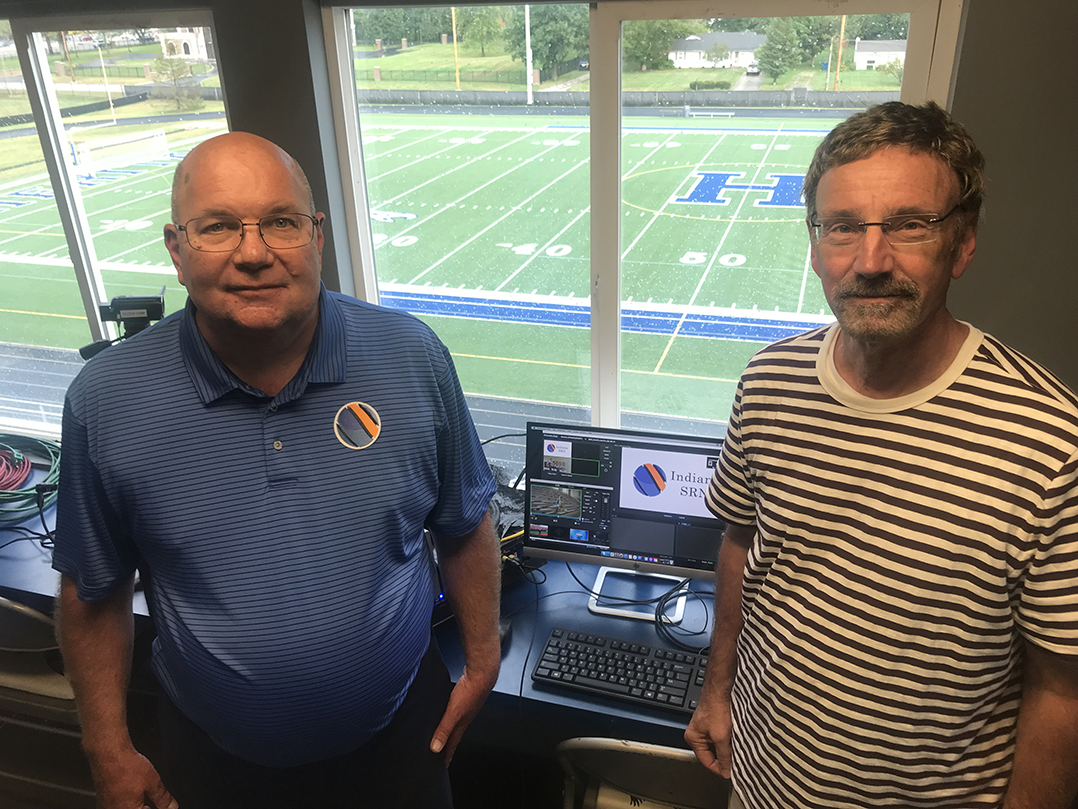 From left, Keith Meyers and Jerry Collins, the leadership of Indiana SRN, prior to a sports broadcast. The platform broadcasted 348 high school games during the 2020-2021 school year.

Prior to starting Indiana SRN, Keith Meyers was the athletic director at Horizon Christian School in the Geist area.

“We were a pretty good basketball team, and no one wanted to play us,” Meyers said. “One day I woke up and the Lord gave me a vision to start internet radio. Our first client was Horizon, and Bill Ludlow and I did our games. We got pretty good. One day he said, ‘Why don’t you quit and do this full time?’”

Meyers said much of the viewing audience is at the game and will watch the replay.

“Every game we do goes on our YouTube channel,” Meyers said. “On Saturday morning, a lot of the kids go back and watch the YouTube channel. That’s where our numbers really grow is on our on-demand and replay.”

“He was recruited because a coach watched one of his games on our webcast and started following him,” Collins said.