You are at:Home»Current in Fishers»Fishers Community»Athlete of the Week: Alli Macbeth sets tone as captain for Fishers girls soccer team

Fishers High School senior Alli Macbeth has some definite goals for both her girls soccer team and herself.

“A goal I have for my team is to only let 10 or less goals in throughout our season conference games and to win sectionals,” Macbeth said. “As for myself, my goals include having 10 assists throughout the season, making it on an all-state team and to be a role model for my teammates.” 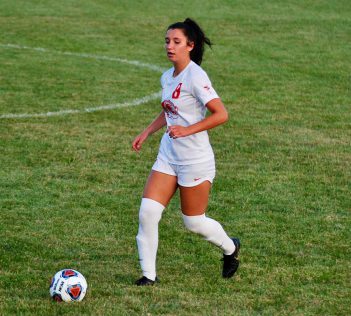 The four-year varsity performer was named to the All-Hoosier Crossroads Conference second team in 2020.

“I think I have made the most improvement in advising and communicating with my teammates on and off the field,” Macbeth said. “But also, I think I have improved in my ability to cover more of the midfield, meaning I can be more of a defensive midfielder when needed and also an asset in the transition offensively.”

Macbeth said she does believe she has become a more vocal leader when necessary.

“For example, I’ll direct (teammates) on positioning on the field,” Macbeth said. “I will always try and encourage my teammates and give them the best advice on and off the field if they ask me.”

Tigers first-year head coach Harold Spooner, who was as an assistant last season, is impressed with Macbeth’s work ethic.

“She was named captain this year because she is one of the hardest workers on the field and does the little things that need to get done when others aren’t as willing to do so,” Spooner said. “Alli is a true box-to-box midfielder who has an excellent work rate on the defensive side of the ball and does a great job of initiating our offense from the midfield. She is a tireless worker in winning the ball back.

“She also has great tactical awareness of knowing exactly where she needs to be to help be a shield for the back line or a support for our offensive players.

Macbeth began playing soccer when she was 3 years old.

“It has always been my main sport,” said Macbeth, who said she tried basketball and dance when she was growing up. She has played soccer at Hoosier FC since she was 8 years old.

Macbeth said she wants to play college soccer but as of yet has no serious offers. She plans to study construction management and/or interior design.