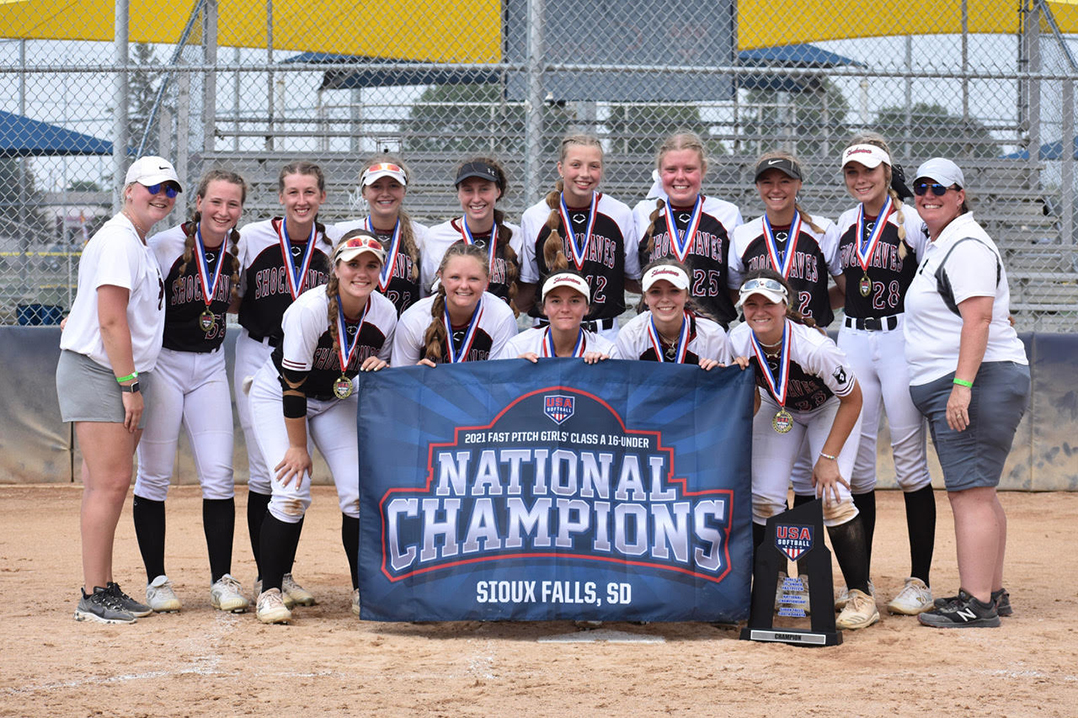 Yet Kemp was quick to share credit by claiming the key to winning the USA Softball Class A U16 national title was all about hitting.

“Everybody was swinging to do damage and it really made it more comfortable to pitch behind,” Kemp said. “I also would say that we were just relaxed. We got rally hats and we made it a point to wear those all the time, so there are lots of pictures of us with like huge smiles and rally hats. We just had fun.”

The Shockwaves Rayman 16U won the national championship by beating Minnesota Magic Gold 2-1 July 31 in Sioux Falls, S.D. The team’s record was 9-0 in the national tournament. The Indiana team’s coach is Carmel resident Jeanne Rayman, a 1986 Carmel High School graduate. She is a former Butler University softball player and head coach.

In the tourney, Kemp, a Westfield resident, was 7-0.

Rayman said the team had great chemistry, but it wasn’t all smooth sailing.

“We hit a rough patch in the middle of our summer, which we started making uncharacteristic mistakes,” Rayman said. “Those mistakes and having the opportunity to really view what we did gave us the wake-up call on what we needed to fix.”

Kemp said the team learned from its mistakes.

“I think we just weren’t having fun or as much fun as we usually do and not as much confidence in the things we know how to do,” Kemp said. “But once we got that back there was no stopping us.”

Kemp, who has committed to the University of Dayton, had 66 strikeouts with and a .233 earned run average.

“That’s kind of my whole job is to not let the other team score runs,” Kemp said. “I am a strikeout pitcher, so not a lot of runs get scored on me most of the time, actually.”

It’s been a special time for Kemp, whose Guerin Catholic softball team reached the IHSAA Class 3A state championship before losing to Boonville in June.

“When we got into championship bracket play, the rules of substitutions changes from what we are permitted in pool play,” Rayman said. “All four of our outfielders typically have a rotation that gets equal playing time for each. In bracket play, those rules don’t allow the same substitutions. Erin’s role was key in our success because we were able to utilize her as a courtesy runner for our catcher in all bracket games. (That) gave us fresh legs and more speed on the bases, creating more scoring opportunities.”

Clark scored six runs in the nine games. She had three hits in six at-bats.

“Jenna Chase was a 14U-eligible player challenging herself in 16U,” Rayman said. “She picked up key innings in pool play to keep the staff fresh and was available for relief pitching as needed. Also, we were able to utilize her in a pinch running or hitting situation.”