You are at:Home»Current in Noblesville»Noblesville Cover Stories»Round and round: More than 30 RV travelers visit Noblesville friend who works “Little Beauty” carousel in Forest Park

When Noblesville resident Bob Goodwin alerted his friends and fellow RV travelers Gina and Chris Fox that he wouldn’t be joining them by RV during the 2021 travel season, the Foxes charted a new course.

fGoodwin had taken a part-time job running the “Little Beauty” carousel at Forest Park and was unable to take time away from working the ride two to three days a week.

“He said something about how they didn’t have anybody to work it, and he didn’t want the kids at the park to be disappointed,” Gina Fox said. “He wanted to make sure the carousel ran. He’s very heartfelt about the things he does. We thought, ‘Well, hey, if he can’t go out this year, then we will bring the party to him.’”

Goodwin recently retired from the City of Noblesville wastewater treatment plant after 34 years and started the job at the carousel in March. The plan to visit him originally started as a joke.

“We were together as a group on Zoom and jokingly we said, ‘Oh, Bob, we are going to come see you and all ride the carousel together,” Chris Fox said. “That fun evening turned into us brainstorming and saying, ‘Let’s put this together.’”

The Foxes decided to unite 35 people from their RV group to travel cross-country to Noblesville and ride the carousel.

“It turned into a week of RV’ers coming in and spending time together,” Chris Fox said.

Seven-hundred people are in the Foxes’ RV network, and Gina Fox said the 35-person trip to Noblesville was the largest she’s been a part of. The RV network, called RVillage, has met via Zoom many times but most of the members have never met in person.

“We’ve camped with people, but this is our first big event,” she said. 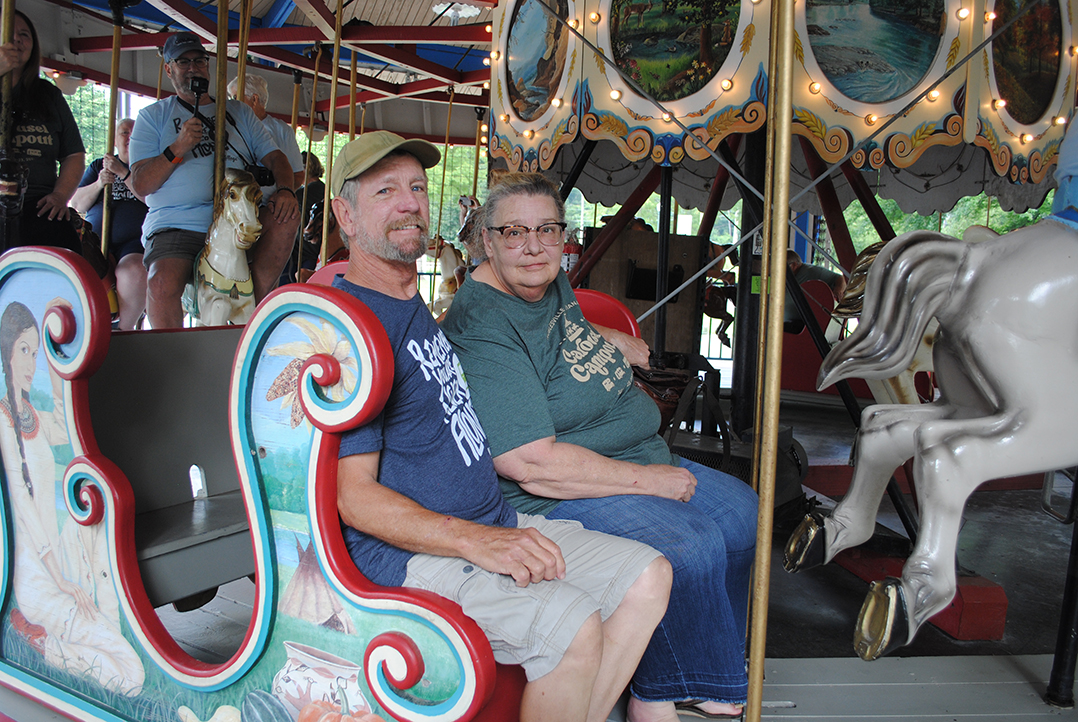 Bob Goodwin rides the carousel with his wife, Kim.

The Foxes and their RV group stayed at the White River Campground just north of Noblesville from July 19 to 23. The Foxes have previously been to Indiana during their travels but never to Noblesville.

“This is something we put together just to support our friend,” Chris Fox said.

Goodwin knew the Foxes were making the trip to Noblesville, but he didn’t know how elaborate their plan was. The Foxes created local activities for the travelers to do each day, and on July 21 they traveled to Forest Park to ride the carousel. RV motorists traveled from across the nation, including as far as South Dakota and Colorado. The Foxes are traveling 700 miles from North Carolina to ride the carousel.

“I couldn’t believe it was even going to happen,” Goodwin said. “It’s been a real joy that everybody came here.”

The Foxes are originally from North Carolina, but they travel by RV full-time. The Foxes laughed when trying to recall the last time they had ridden a carousel.

Chris Fox said he thinks he must’ve ridden one in the last 10 years because the couple has a 10-year-old granddaughter and he thinks he rode one with her. To keep up with the Foxes RV travels, visit The Riveted Fox on Facebook. 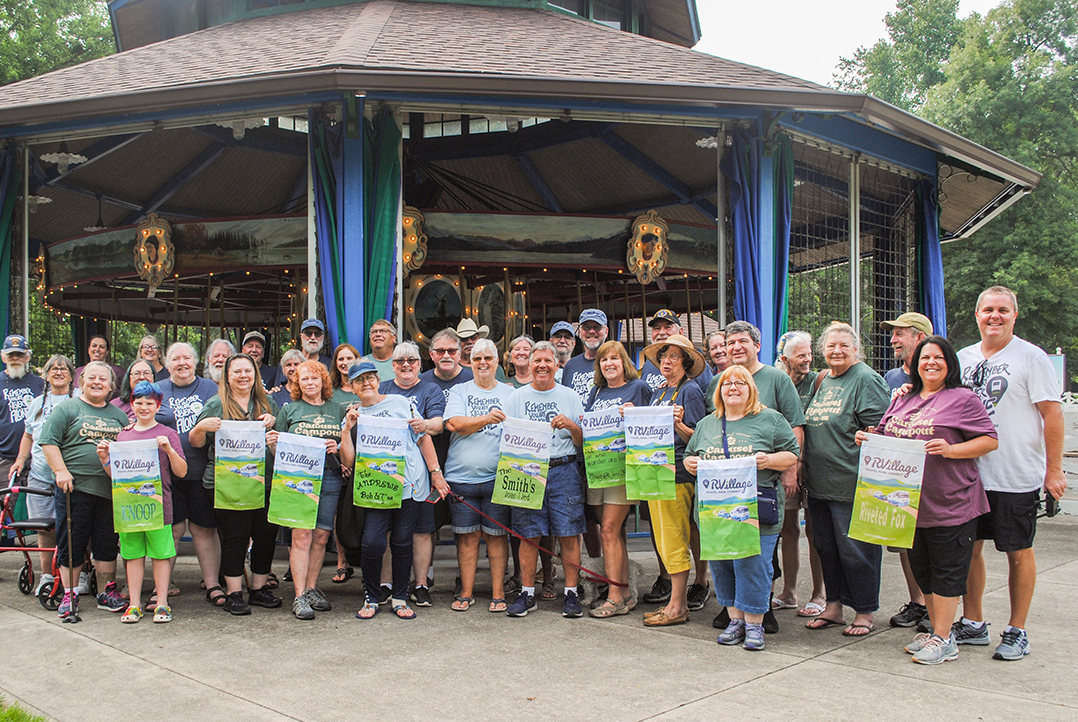 More than 30 people traveled to Noblesville to ride the carousel with their friend Bob Goodwin.

Bob Goodwin works at the “Little Beauty” carousel part time. His responsibilities include taking care of the carousel, cleaning it, working the concession stand and also working the mini-golf course at the park.

“I didn’t want to just sit around and become a couch potato (after retirement). I wanted to stay active, and I love kids,” Goodwin said. “I love the atmosphere of the park and I love seeing the kids smiling, and this is the atmosphere that makes that happen.”