You are at:Home»Night & Day»Restaurants»Restaurant owner addresses plethora of burger options in Hamilton County

At times, it seems like a new burger joint opens in Hamilton County nearly every week. But local burger restaurant owners aren’t concerned with the competition.

At Flight Burger in Carmel, owner Dallas Miller said the business model of offering half-sized burgers in sets of three, similar to flights of beer, is something no one else is doing.

“The flights of burgers make us different,” Miller said. “They’re 3 ounces, and sliders are typically 1 to 2 ounces. So, they’re half the size of a full burger.”

Every burger on Flight Burger’s menu can be ordered full- or flight-sized. A flight of three burgers, which adds up to 1 1/2 full burgers, is $11.99.

Flight Burger previously was a Burgerim franchise but rebranded when Burgerim considered bankruptcy. Miller said the biggest mistake he sees restaurants make is not putting all of their money back into the food.

“When we did our rebrand, we had U.S. Foods and all of our vendors come in and give us samples from the cheaper option to the most expensive option,” Miller said. “Everything from chicken, lamb, crispy grilled chicken and Wagyu, we went with the expensive option on everything. It was better. We weren’t planning on doing it that way, but quality is a bigger deal than price.”

At Flight Burger, nearly all menu items are under $10.

At Burgerhaus, pronounced “burger-house,’ in Carmel, executive chef Zachary Jeffries said it sets itself apart from the competition by giving burgers a twist.

“We try to utilize different recipes from different areas of the world and styles, along that for the burgers to give it a bit of a different twist than a normal burger joint,” Jeffries said. “We stand apart enough to where we bring in somewhat of a different clientele. A lot of burger joints, they’re really good, but they’re basic with bacon, egg and whatever type of burgers. It’s your classic. We are all about presentation and trying to make sure it looks pretty.”

Some of Burgerhaus’ international-inspired burgers include the Monaco, with white cheddar, sautéed onions and mushrooms, and the Corinth, with roasted red peppers, pepperoncini, red onion and feta cheese.

Big Hoffa’s Smokehouse in Westfield specializes in barbecue, not burgers. However, owner Adam Hoffman said he’s figured out the secret recipe for the best smash burger in town. Hoffman said he’s put the burger on the menu as a featured item three times, and people traveled to Westfield from more than an hour away to order it. He describes the burger as a “traditional smash burger” with a crispy underside to the bun, melty cheese, thin patties and a house-made special burger sauce.

“It has a heavy beef flavor, and we season it ourselves, too, and it comes in fresh and not frozen,” he said. “I think it all comes from the quality of meat, but other things we do to make it great is, we toast the bun with garlic butter. We use an American, unprocessed, good-quality cheese, and the sauce we make in-house is similar to Thousand Island Dressing.”

Hoffman compares Big Hoffa’s smash burger to In N Out, which is his favorite burger joint.

“I think people try to do too much,” he said about other burger restaurants. “I don’t think there’s anything wrong with putting mushrooms, bacon, lettuce and strawberry jam on a burger, but I think people do too much. People want to taste the meat and cheese and how the crusty part of bun interacts with that part of burger. I think that’s the most important part of the burger – not trying to hide the flavor.”

A look at the local burgers 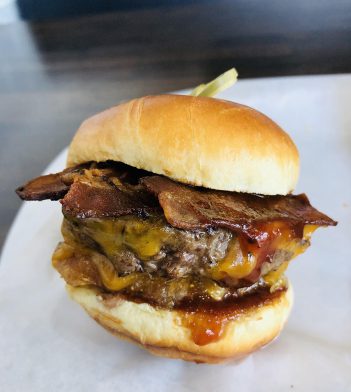 All of Flight Burger’s burgers are $8.49, or they can be served as a flight of three, 3 oz. burgers for $11.99. The Western features Wagyu beef, bacon, barbecue sauce, cheddar cheese and an onion ring. (Photos by Anna Skinner) 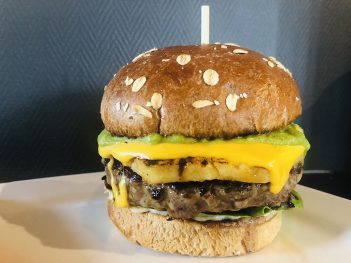 Burgerhaus features burger themes from around the world. The Cozumel is Mexican themed with guacamole, pickled jalapeños and grilled pineapple. 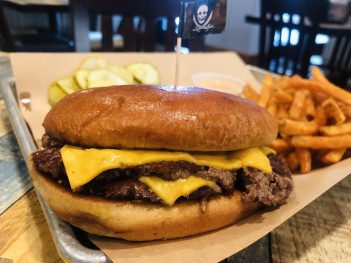