You are at:Home»Current in Carmel»Carmel Cover Stories»‘Rollin’ Pickle Belle’: Carmel resident wins silver medal in sport that left her unable to walk

Jody Davis was playing pickleball at the Monon Community Center when the unthinkable happened.

“It sounds crazy. I bent over to pick up a ball and (a) chip off a disc went down the vascular system of my spine and cut off the blood temporarily,” Davis said of the rare condition known as a spinal infarct. “Within the matter of an hour, I lost the use of both legs.”

That was six years ago.

“The good news is, with intense rehab and outpatient therapy, my left leg has probably 90 percent ability to stand, and my right leg is 30 to 40 percent,” Davis said. “With a walker, I can walk short distances. I can’t take a step without the walker.” 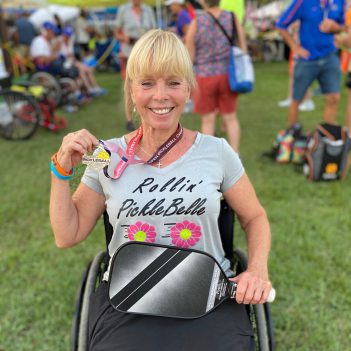 So to stay active, the Carmel resident has been competing in wheelchair pickleball for five years. In the Minto U.S. Open Pickleball Championships in Naples, Fla., in April, Davis earned a silver medal with doubles partner Lisa Ruggieri in an event where all participants are in a wheelchair. She won a bronze in the hybrid division with a standing partner, Micki Petersen. She had never played with either player before.

Davis, 68, had taught school for 38 years at Nora and Greenbriar elementary schools in Washington Township in Indianapolis and had retired the year before the injury.

“I was a tennis player. I used to be a runner and then became a walker (before the spinal injury),” said Davis, who works three days a week at the front desk of the Monon Community Center.

While she was regaining strength in the first year after the spine injury, her daughter, Holly Vance, a registered nurse, attended her rehab sessions.

“She would remember the exercises, and she hired a trainer who came in three times a week to work with me,” Davis said. “My brother, Rick Reel, who was a triathlete at the time, and his wife would pick me up two or three times a week and get me to the pool. Initially, we had to use a chair lift and life jacket when I went in the pool. He worked with me with leg exercises in the pool and eventually he would swim with me to get me to swimming laps.”

Vance said her determination has set an example for the entire family.

“Any opportunity she had to get stronger she took,” Vance said. “The physical trainer worked with her to strengthen every muscle we could get to move at all. There is nothing she is going to let hold her back.”

Davis’ husband, Jim, equipped the house to be wheelchair accessible.

Soon, Davis was back playing pickleball and wheelchair tennis.

“I have a great group of family and friends who all said, ‘We know you, and you can do whatever you want to do,’” Davis said. “They were very encouraging. I got back on the pickleball courts. There are no other wheelchair pickleball players that I know of in Indianapolis. There is a group of eight to 10 of us that play wheelchair tennis and I’ve introduced them to pickleball. They also work, so it’s hard to create another sport for them to do because they are already doing tennis.”

Davis said there are women she plays doubles pickleball with each week.

“I’m the only chair player, but they always say, ‘You don’t have to be nice to her because she’ll beat you,’” Davis said. “I have a lot of fun with it. Everyone is supportive and I have a nickname, the ‘Rollin’ Pickle Belle.’ Anyone of any age can learn to play pickleball. It’s easy to pick up the game. I’ve been teaching it for special needs adults, so we adapt the game.” 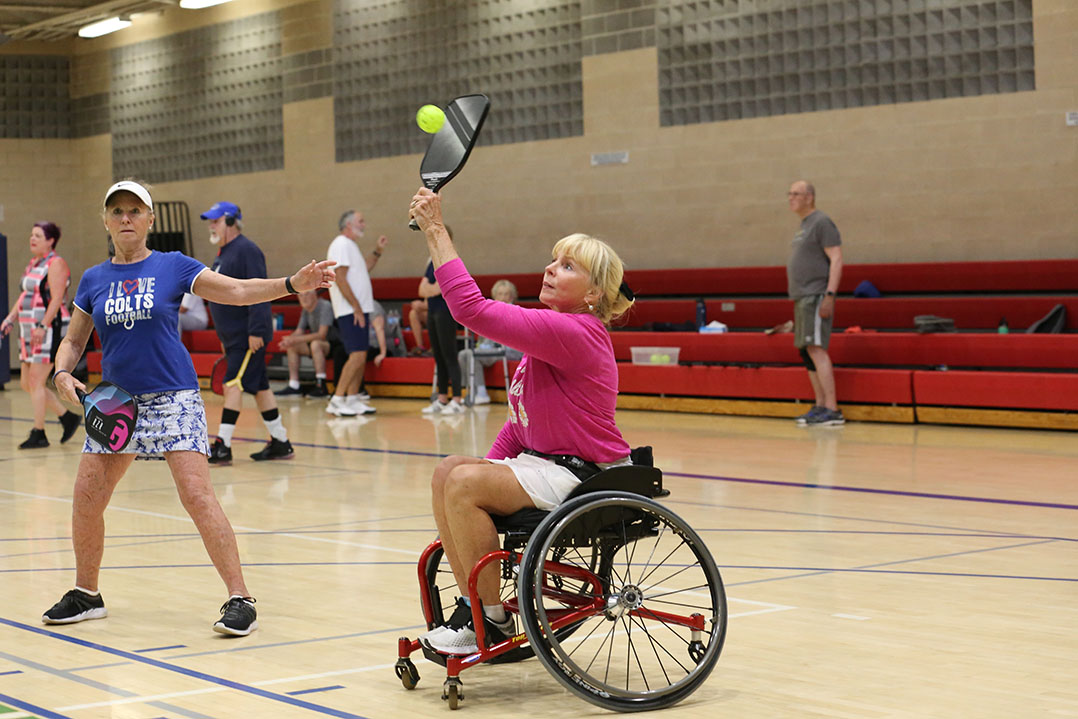 The mothers of Colleen Colvin and Jody Davis were sorority sisters at Indiana University. Starting in ninth grade, Davis and Colvin became close friends. The friends graduated from North Central High School together and attended IU. Through the years, they’ve maintained a strong bond.

“She’s always been athletic, but once she had this stroke, she didn’t let anything stop her,” said Colvin, a Carmel resident. “She went forward full force and she never looked back. She never has anyone feel sorry for her. She’s not going to let this wheelchair get her down. She’s always been positive and looked on the bright side of things. She’s an inspiration to everybody, and she’s my best friend.”

Colvin said she plays pickleball for fun and that the friends usually play together on outdoor courts twice a week. Colvin’s husband, John, introduced the friends to the sport several years before it became popular in Carmel.

Although Colvin said Davis is more competitive about the game, Colvin said her friend is always gracious.

“She is always willing to help people,” Colvin said. “She wants everyone to play because she loves it.”