As the mother of a gay son, I appreciated my recent opportunity to sit down with staff members in Sens. Todd Young and Mike Braun’s offices to discuss something on which we can find common ground: ensuring fairness and equality for all Americans. Congress this year has an opportunity to finally enact nondiscrimination protections for the LGBTQ community, and I am looking to Indiana’s senators to play a constructive role in hammering out details of this crucial civil rights legislation. 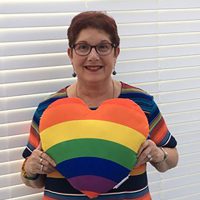 My husband devoted his career to military service, defending America’s traditions of fair play and equality. As a military family, we moved around a lot, only making a permanent home 25 years ago when we settled in Indiana.

Shortly after arriving, our only child — our son — came out as gay. The love my husband and I have for him guided us in giving him the support he deserves. We are thrilled that he chose to build his adult life here in Indiana, having recently purchased a home.

Unfortunately, many LGBTQ Hoosiers who came of age with our son — as well as countless others younger still — have made the difficult choice to leave Indiana in search of a home in a state committed to protecting their rights and dignity.

As a member of PFLAG, an organization of parents, families and friends who support their LGBTQ loved ones, I’ve met too many parents who have watched their children move away because of repeated efforts in the legislature to target their basic rights and opportunities. Their stories are heartbreaking.

Our family is Jewish and our faith has shown us what discrimination looks like. We’ve seen friends refused jobs and treated differently because of their Jewish faith.

My faith is very important to me, and I take seriously the Jewish command to make the world a better place. Because of my deep love for my son, I have, in recent years, become an advocate, through PFLAG, for him and every other LGBTQ child. I‘ve attended and organized rallies, opposed discriminatory legislation and heard beautiful stories from so many other amazing Indiana parents who, like me, see no more sacred duty in life than to stand up for their children.

The reality of discrimination is not just something I’ve witnessed among my PFLAG friends. Nor is it an abstract issue useful as a political football. It has profoundly damaging and lasting consequences for LGBTQ Americans. One in three LGBTQ folks, according to a 2020 survey, experienced discrimination — in public spaces, on the job, in schools and in their own neighborhoods — in the previous year, with that number rising to 60 percent among transgender people. Those experiences, according to extensive research, negatively affect both their mental and physical health.

Vulnerable groups face especially severe consequences. Unemployment and poverty rates — already higher among people of color than among whites — are significantly higher yet among LGBTQ Blacks and Latinos.

Transgender Americans experience unemployment and poverty at 2 1/2 to three times the national average, and almost 1 in 3 have experienced homelessness. Violence also stalks the lives of trans people — with a record 44 hate-motivated murders last year.

Among LGBTQ elders, same-sex couples face persistent discrimination in securing senior housing, while the community’s youth face bullying, depression and suicide risks at alarmingly high levels, with less than half the states providing protections against harassment.

But there is now hope that Congress might finally act. For the first time, both Democrats and Republicans have put forward measures that include LGBTQ protections in our nation’s civil rights laws. The major bone of contention between the two parties involves balancing the urgent need to protect LGBTQ people with the religious freedoms all Americans cherish.

Finding a path to getting that job done is what legislators do whenever they are committed to solving problems, and Sens. Young and Braun can look to the 21 states that have adopted laws prohibiting anti-LGBTQ discrimination without compromising religious freedoms.

Washington can do the same.

We need leaders like Sens. Young and Braun to reach across the aisle to help end the divisive pattern of pitting religious liberties against the basic rights of LGBTQ Americans.

Sens. Young and Braun, my family and thousands of other Indiana families are counting on you!

Annette Gross is a member of a military family. and a PFLAG parent living in Carmel. Contact her at chwester26@comcast.net.